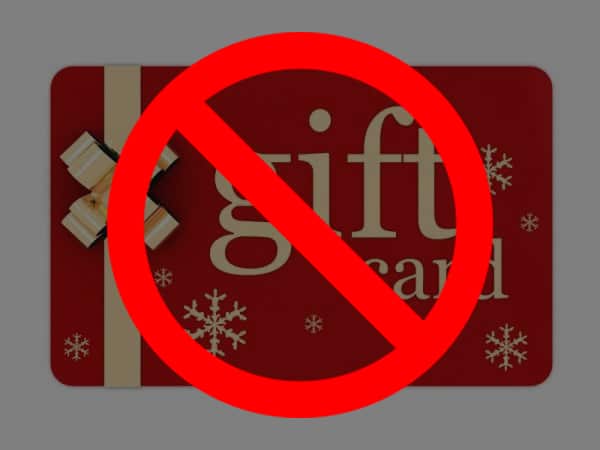 When gift cards were first introduced a couple decades ago, they were initially seen as a bit tacky to give someone as a present. They came off as a little thoughtless, as the giver seemed to be saying, “I couldn’t spend the time to figure out just the right gift to get you, so I got you this card instead.”

These days, any indecorousness attached to giving gift cards has largely worn away as their popularity has exponentially grown. “Shoppers” will in fact spend over $30 billion dollars on them this holiday season.

But I’d like to encourage you to buck that trend and to eschew giving gift cards this year. Not so much because they show a lack of thought by the giver, but because it outsources that thinking to the recipient.

In his book Shadow Work: The Unpaid, Unseen Jobs That Fill Your Day, Craig Lambert explores the many tasks we do which go unnoticed and unremunerated. He largely focuses on the jobs that corporations once paid employees to do, but which they’ve now outsourced to consumers: pumping your own gas, bussing your own table, booking your own flights, doing your own product research, etc.

Because of this surge in shadow work, while we may only hold one “official” paid job, we actually wear many hats these days, and all these tasks and decisions add to our stress, sap our willpower, and make us feel busier than we actually are.

While corporations contribute a lot of this shadow work to our lives, Lambert notes that we can also create it for ourselves, as well as shift it onto other people.

One of the ways we do that, he explains, is by giving people gift cards.

The traditional idea behind giving gifts is that the giver spends time and thought coming up with just the right present for a particular person. They take into consideration the recipient’s likes, dislikes, and hobbies, search what’s out there, and then choose (or make) a gift they believe best intersects with the person’s interests and tastes. A gift’s thoughtfulness is in proportion to the sacrifice in energy the giver seemingly made in deciding on it (as well as the sacrifice the giver had been making all along in the relationship, in paying dedicated attention to the recipient’s expressed desires).

In giving a gift card, however, the giver takes the time, energy, and thought required by this process, and outsources it to the recipient. It’s now their job to think about what they’d like, comb through what’s out there, weigh different options, and make the purchase.

Especially in the age of online shopping, when thousands of products and reams of reviews and information about them is available at our fingertips, it’s simultaneously never been more tedious and exhausting to choose a product yourself…and more generous and thoughtful for someone else to make the choice for you. I know I cannot think of a greater gift than someone else sparing me from the legwork – the hours of sifting through Amazon reviews, the endless comparing of various features – that goes into finding just the perfect thing I want/need.

Of course, even when someone puts a lot of time and thought into finding what they think is a perfect gift, they may still miss the mark, and the recipient doesn’t end up happy with what they got. It’s for this reason that gift cards are admittedly very popular not just with givers, but recipients as well.

But I would argue that we’re often actually better off with a bum gift that requires no thought or energy to deal with besides stashing in a junk drawer, than we are with a gift card that necessitate doing our own shopping and decision making and adds to our shadow work. In the former case, we’re no worse off than before – and our mental bandwidth has been preserved!

So down with gift cards, I say!

Yes, Yes, There Are Caveats

Despite the satisfying universality of shouting this injunction, there are admittedly a couple caveats to forgoing gift cards.

First, not all gift cards are created equal, and create an equal amount of shadow work. Gift cards for restaurants, or those which can only be used for specific experiences, are superior to the more open-ended variety (e.g., Macy’s, Amazon, Target) since they take almost all the guesswork out of what to use them for (besides choosing between the Chicken Crispers and the Southwest Eggrolls at Chili’s). Plus, experiences are usually superior to stuff anyway.

Second, there are some people in your life to whom you want to give something, but who you don’t know very well, and thus would have a more difficult time coming up with a perfect present for. Perhaps some service providers you wish to tip, for example. In many of these cases, cash would be the best, and most appreciated, way to go. But in cases where cash would seem gauche, a gift card would be appropriate. Here a more open-ended gift card would actually be a better choice, as these folks may need to use it for things they need, rather than simply want, and the flexibility will be appreciated.

Beyond these caveats, I encourage you to dispense with giving gift cards this season in favor of buying (or making!) well-considered presents for friends and loved ones. In our modern age, there’s nothing quite so generous and thoughtful as the gift of saving others from shadow work.