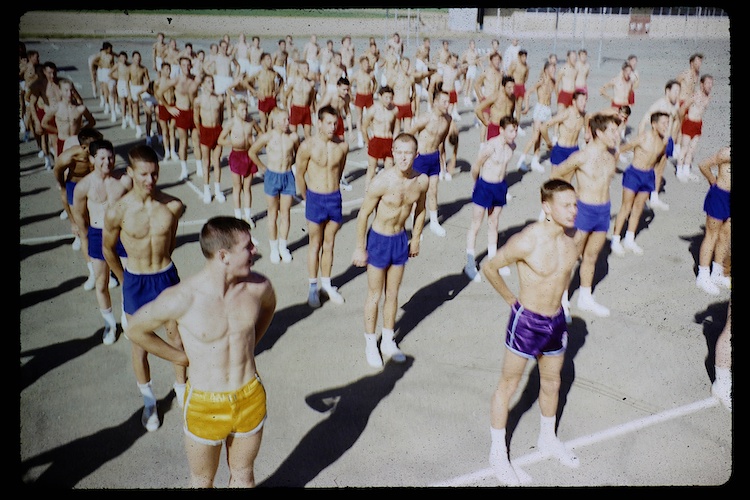 In most modern high schools, P.E. is a complete blow-off class — something to take when you don’t play a sport, and have to fulfill a health/fitness-related elective. Participants often sit on the bleachers and talk, or half-heartedly play some basketball.

There was a time in this country when P.E. was taken more seriously, however, and it reached its absolute apex at La Sierra High School in Carmichael, California.

During the 1950s and 60s, La Sierra boasted what was arguably the most rigorous P.E. program in the country, if not the world. The so-called “La Sierra System” was born in a time when World War II was over, the Cold War was still heating up, and prosperity and technological advancements were making life increasingly sedentary and comfortable. In this atmosphere, there existed a national concern over whether Americans were becoming too soft, overweight, and complacent to not only defend their country in war, but to vigorously meet the challenges of peace.

As President John F. Kennedy wrote in “The Soft American”:

physical fitness is not only one of the most important keys to a healthy body; it is the basis of dynamic and creative intellectual activity. . . . [We] know what the Greeks knew: that intelligence and skill can only function at the peak of their capacity when the body is healthy and strong; that hardy spirits and tough minds usually inhabit sound bodies.

In this sense, physical fitness is the basis of all the activities of our society. And if our bodies grow soft and inactive, if we fail to encourage physical development and prowess, we will undermine our capacity for thought, for work and for the use of those skills vital to an expanding and complex America.

Thus the physical fitness of our citizens is a vital prerequisite to America’s realization of its full potential as a nation, and to the opportunity of each individual citizen to make full and fruitful use of his capacities.

To stem the physical deterioration of his fellow Americans and promote the idea of developing a sound mind, in a sound body, JFK utilized the President’s Council on Physical Fitness to reinvigorate physical education programs around the country, and looked to La Sierra as an example of what was possible in this line.

The first few minutes of the above video will give you a look at what some aspects of the La Sierra program were like.

The La Sierra System had been developed by WWII-veteran Stan LeProtti, who was inspired by the classical, “whole man” approach to fitness that had been championed by the ancient Greeks. LeProtti’s program sought to improve the strength, agility, balance, flexibility, power, and endurance — as well as the leadership qualities — of all the males in the student body, not just those relatively few boys who participated in organized athletics. The program not only incorporated physical exercise — a regimen that included an intense 12-minute calisthenic warm-up, sports, games, dance, combatives, gymnastics, running, aquatics, and off-the-ground work on various apparatuses like peg boards — but also involved regular meetings to talk about the philosophy — the why — behind it. Students were taught that the fitness routines in which they engaged not only built their bodies, but prepared their minds for learning and their spirits for tackling life’s setbacks.

The “Philosophy” section of the La Sierra P.E. handbook includes both “Physical Fitness” and “Psychological Fitness” as two of the program’s goals, and lists the following among the aims of the latter:

When the producers of The Motivation Factor, a documentary about the La Sierra System, interviewed those who had gone through it in their youth, they reported that the program had delivered on just this desired effect — and that it stayed with them into adulthood; when these La Sierra grads had experienced challenges in later years, they returned to their P.E. experiences as a touchstone — a reminder that they were capable of doing hard things.

Another unique trademark of the La Sierra System was its use of “ability grouping” — a hierarchy of ranks denoting different levels of physical proficiency. The boys were put in teams based on these levels, and each team/level was identified by different color satin trunks worn by its respective members (sans shirt) while they exercised. All freshmen started out on the White Team, wearing white shorts, and then could work their way up the ranks throughout their high school years. When you tested into the next level, you got to discard your old color shorts for new ones and proudly display your earned achievement. The color system was designed to harness boys’ natural propensity for competition and publicly-recognized status as a spur towards “physical excellence.”

One might be apt to wonder if this system didn’t shame and embarrass those boys who were at a lower level of fitness, and had to wear the lower-level shorts. Wouldn’t the color groups make them feel bad about having to broadcast their position at the bottom of the ladder?

A coach at the time, Richard Chester Tucker, who went on to write his PhD dissertation on La Sierra’s color system, looked into this very question. He compared the least physically capable third of students at both La Sierra and at a school that had a traditional P.E. program. What he found was that there was no difference between the self-esteem of the boys in each group. But, the boys at La Sierra were more physically fit than those at the other school; for example, on average, the lowest third of boys at La Sierra could do nine pull-ups, while the lowest third of boys in the traditional P.E. program could only do two. In other words, the color-coded shorts system didn’t make students feel bad about themselves, but it did inspire them to strive higher; maybe these kids weren’t ever going to be elite athletes, but the color-code system motivated them to become their best. As Tucker says in The Motivation Factor, “We came under a lot of criticism because [people said] ‘You’re making these kids walk around in white trunks. What does that do to their self-esteem?’ It makes them want to get red trunks!” 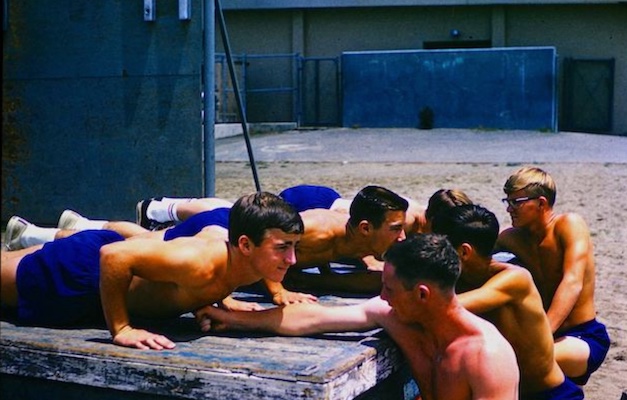 When interviewed as adults, those who went through the La Sierra program remembered it as being fun and highly supportive; the boys encouraged each other and helped each other reach the next tier.

Within the color system, there were four main levels: White (Beginner), Red (Intermediate), Blue (Advanced), and Navy Blue (Ultimate Athlete). Within the Blue level, there were two sub-levels: Purple and Gold. More than 90% of students were able to advance from the White Team to the Red Team by the end of their freshman year, and 60% were eventually able to make the Blue Team. For every 100 students, only one or two were still wearing white trunks by the time they graduated.

The following benchmarks had to be hit to move beyond the White Team and reach subsequent color levels within the La Sierra System.

The median and ceiling sub-standards within the Blue level were categorized as their own colors: Purple and Gold. To test for the Navy Blue trunks, you first had to earn your Gold trunks.

Representing the pinnacle of physical fitness, the Navy Blue shorts were obviously extremely difficult to earn, and as a result highly coveted. When a student earned his Navy trunks, his accomplishment was announced over the school’s PA system, and the entire student body would erupt into thunderous cheers.

Between 1958 when the Navy Blue level was introduced and 1983 when La Sierra High School closed, only 21 students were able to achieve these trunks. Today, the standard remains as a testament to a time that had high expectations for its youth — that believed in their potential and pushed them to reach for as much of it as they could.

Listen to this episode of the AoM podcast for more on the La Sierra P.E. program: