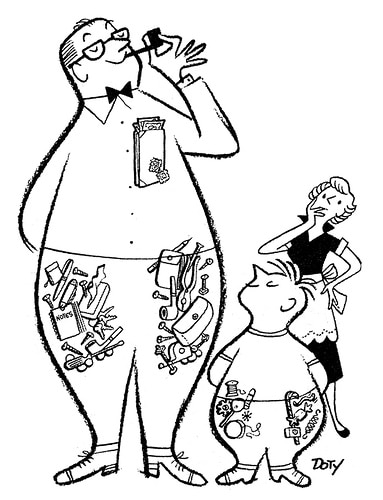 You can tell a lot about a man from what he keeps in his pockets. And you can tell a man’s whole life history from how those contents change over time. At least that was the premise of a piece that appeared in a 1933 issue of Esquire Magazine. Enjoy.

Contents of His Pockets at Ten

1 watch, lacking a main spring.
1 report card, badly frayed and unpresented at home.
1 much damaged cigarette, unsmoked.
1 penknife.
1 rubber band, for use in sling-shot.
Remains of an exploded toy balloon.
2 marbles.
4 caps of milk bottles, won in competition
1 dirty handkerchief.
1 piece of chewing gum.
2 keys which do not fit locks.
7 pieces of string.

Contents of His Pockets at Twenty

1 cheap watch
1 one dollar bill and twenty-one cents in change.
1 letter on lavender stationery from a girl in Worcester, Massachusetts, signed with numerous “X’s.”
1 letter on mauve stationery from a girl in Cleveland, Ohio, signed with numerous “X’s.”
1 photograph of a beautiful girl who does not live in Worcester, Massachusetts or Cleveland, Ohio.
1 address book, containing nicknames and addresses only.
1 letter from the Dean of …….College, regretting the necessity of again calling attention to his deficiencies.
1 bank book, showing balance of $4.20.
1 pipe, marked with college class numerals.
1 tobacco pouch.
1 key to his own door.
1 fancy handkerchief for coat pocket.
1 pocket comb.

Contents of His Pockets at Thirty

1 gold watch with jeweled movements
1 roll of bills containing $84.00.
1 practical handkerchief and one fancy handkerchief in coat pocket.
The same picture of Mrs. Milton J. Wurtleburtle and both the children.
Membership card in Elks, Moose and nine other fraternal orders and clubs.
1 accountant’s statement of business of Milton J. Wurtleburtle & Co., showing net worth of business now high
1 letter from Jake Hesser from Colorado, saying Wurtleburtle can expect to hear great news from that mining proposition soon; all that is needed is capital.
1 circular, advertising hair restorer.
1 memorandum from wife to stop and buy new goldfish, the old ones having died.
1 bill from summer camp for children’s stay.
2 ten-cent cigars.
Several keys on ring, opening-
(a) his home door
(b) his office door
(d) his automobile tire lock and
(d) his safe deposit box

Contents of His Pockets at Fifty

1 watch, inscribed “To the Chief from Affectionate Employees of Milton J. Wurtleburtle & Company, on the Occasion of His 50th Birthday.”
1 roll of bills, held together with rubber band.
2 silk handkerchiefs and one for display.
1 picture of son in cap and gown.
1 picture of daughter in riding habit.
1 letter from son, asking for a little more money this month.
1 letter from daughter, saying she will be home after attending only four more out-of-town horse shows.
1 statement of accountant showing Milton J. Wurtleburtle & Co. has very large net worth this year.
1 spectacle case containing a pair of reading glasses.
Life membership cards of twenty-two different fraternal orders and clubs.
Letters from receivers of Colorado-Hesser Mines, Inc., stating it is doubtful whether stockholders will receive anything from wind-up of concern.
2 quarter cigars.
Numerous keys on ring, including-
(a) key to home door
(b) key to office door
(c) key to safe deposit box
(d) key to country club locker

Contents of His Pockets at 60

1 watch, inscribed as before, containing, in case, picture of three grandchildren.
1 roll of bills as before.
1 practical handkerchief.
7 additional pictures of three grandchildren.
1 letter confirming reservations for “Around the World Cruise” for Mr. and Mrs. Milton J. Wurtleburtle.
1 copy of tentative president’s report for submission to stockholders of Milton J. Wurtleburtle & Co., Inc., showing large dividends earned during the year.
1 bottle of liver pills.
1 spectacle case containing bifocal glasses.
1 recipe for cocktail, written by a friend.
Several keys on a ring, opening:
(a) his home door.
(b) his office door.
(c) his safe deposit box.

Contents of His Pockets at Seventy

1 watch, inscribed as before, containing, in case, picture of Mrs. Milton J. Wurtleburtle.
Roll of bills as before.
1 dirty handkerchief.
1 spectacle case with glasses and one spectacle case with magnifying glasses.
Letters from three grandchildren from three different colleges, thanking him for Christmas presents.
Letter from Edenwood Cemetery, acknowledging receipt of check for perpetual care of Mrs. Milton J. Wurtleburtle’s lot.
Letter of praise from Board of Directors of Milton J. Wurtleburtle & Co., Inc., on occasion of his retirement from active business.
Notice to report for jury service.
1 newspaper clipping, concerning grandsons playing as substitute end for Princeton.
Two keys on ring, opening-
(a) his home door.
(b) his safe deposit box.

Contents of His Pockets at 80

1 handkerchief in coat pocket carefully folded and placed there by the undertaker.