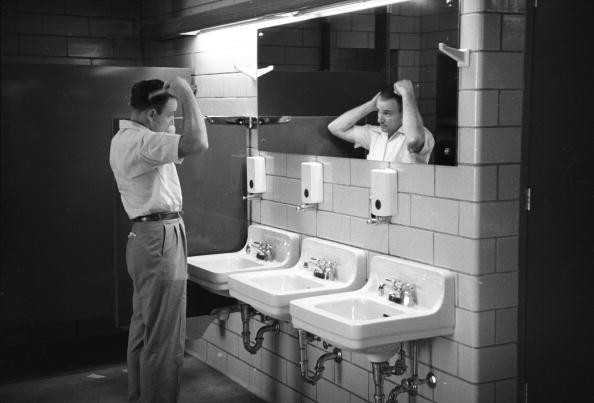 Growing up, I’d watch my dad gather his EDC every morning:

The other day, I found myself thinking about the last entry on that list, and how many other men my dad’s age also carried a black comb in their back pockets.

If you watch movies and TV shows from the 1950s through the 1980s, you frequently see dudes busting out their pocket combs to give their hair a quick once-over before interacting with a gal they hope to impress.

The Fonz had a pocket comb.

The greasers in The Outsiders had pocket combs.

The greasers in Grease had pocket combs.

Edd Byrnes had a pocket comb, and Connie Stevens (sort of) sang about wanting to borrow it.

Except for the occasional switchblade comb I’d get at Chuck E. Cheese, I never regularly carried a pocket comb in my life.

And based on observations of men my age, I don’t think most of them carry or have carried a pocket comb either.

Why did the men of past generations carry pocket combs, but their children and grandchildren don’t?

There are two potential contributing factors to the fall of the men’s pocket comb.

According to New York Times writer David Colman, the first factor contributing to the decline of the men’s pocket comb was a change in hairstyle trends that happened in the late 90s through the first decade of the 2000s.

Instead of neatly coiffed hairdos, many men were going for the “bedhead” look. Thanks to Zac Efron, Robert Pattinson, and One-Direction-era Harry Styles, dudes started purposely styling their hair to look artfully mussed.

When you’re going for a messy look, you don’t need to carry a pocket comb to keep your hair looking tidy and tight throughout the day.

But I never went in for the bedhead look, so the rise of a more nonchalant hairstyle wasn’t why I never carried a pocket comb.

I think the big reason other men of my generation and I didn’t carry a pocket comb was that we didn’t need to, thanks to hair products that provided a better hold than what our fathers had available.

For most of the 20th century, when men styled their hair, they used an oil-based product like Brylcreem or Wildroot. While these products give your hair that Cary Grant shine, they don’t provide a lot of hold. You’d need to occasionally comb your hair back into place throughout the day, so you had to carry a comb in your back pocket to perform these touch-ups.

Fast-forward to the late 1980s, and you see the rise of a new type of hair product: hair gel.

Hair gel provided shine and all-day hold. You could style your hair with gel and be confident it would stay in place the entire day. Gen-Xer and Millennial dudes embraced hair gel wholeheartedly.

I’d slather my hair with LA Looks hair gel and then comb up the front like most suburban white dudes did back in the late 90s. (Shoutout to the 40-year-old dads still rocking this hairstyle — a preponderance of which seem to reside in Utah. 1999 Blink-182 would be proud of you.) My hair would be nice and crispy and stay in place throughout the school day. Never needed to restyle it. The gel would seep out of my hair during football practice from all the sweat in my helmet and burn my eyes. But it was a small price to pay for an all-day hold.

Thanks to advances in hair product technology, today there are products on the market that provide both shine and all-day hold, without the crispiness of 90s-era hair gels. These products have perpetuated men’s ability to set their hair in the morning and forget about it the rest of the day, cementing the disappearance of the pocket comb. That’s not to say it’s gone entirely extinct. I still see men bust out a pocket comb now and then. But they’re usually over 60 or some young hipster.

Thus, in the end, changing hairstyles, but more importantly, changing hair products, led to the demise of the pocket comb. Case closed on this grooming mystery.