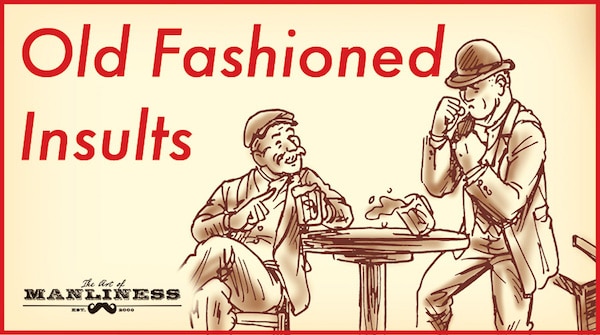 With our archives now 3,500+ articles deep, we’ve decided to republish a classic piece each Sunday to help our newer readers discover some of the best, evergreen gems from the past. This article was originally published in July 2016.

As Lesley M. M. Blume observes in Let’s Bring Back: The Lost Language Edition, while clothing fashions have a way of cycling in and out of popularity, when the sun sets on popular slang, it tends to remain buried forever. This isn’t always a bad thing — no one is jonesing for “Tubular!” and “Groovy!” to resurrect from the 1980s and 60s, respectively.

In some cases, however, where words have died, no equally worthy substitutes have risen in their places. This is particularly the case when it comes to our modern stock of insults and put-downs. If someone we meet or are apprised of in the news conducts themselves in an objectionable way, what words do we have at our disposable to call them? Jerk? Knucklehead? Perhaps we just resort to a set of tiresome, overused, meaningless expletives. Where’s the fun in that?

No, our storehouse of insults could surely use replenishing, and for this restocking operation there’s no better place to go than the slang of the 19th century — a time of truly colorful and entertaining verbiage. These old-fashioned put-downs have a flair that modern insults lack — they’re clever, nuanced, descriptive, and quite amusing (at least to the issuer and those who overhear, if not to the receiver!).

Below we’ve put together 50 of our favorite old-time put-downs, with their original definitions pulled directly from dictionaries published more than a century back (with some slight tweaking for added clarity). Some have gone completely extinct from our language, while others are merely endangered; you may have heard them before, but they’re terribly underused. All are worthy of a revival.

And as a bonus, we’ve also included a section of unique insults issued by none other than Theodore Roosevelt — a man who never suffered fools, or white-livered weaklings, lightly.

A laggard; a farmer who rises late and is behind in his chores; hence, anyone who loses his opportunities.

2. All Hat and No Cattle

An empty boaster; a man who is all talk and no action.

A short gun, with a wide bore, for carrying slugs; also, a dumb, blundering fellow.

A mean fellow; a man trying to worm something out of another, either money or information.

An excessive, incessant talker or chatterer. “Clack-box” is the more derisive variation.

Much the same as “buffle head,” “cabbage head,” “chowder head,” “cod’s head” — all signifying stupidity and weakness of intellect; a fool.

9. Death’s Head Upon a Mop-Stick

A poor, miserable, emaciated fellow. He looked as pleasant as the pains of death.

A man of small understanding and much ostentation; a pretender; a man fond of show, dress, and flutter; an impertinent: foppery is derived from fop, and signifies the kind of folly which displays itself in dress and manners: to be foppish is to be fantastically and affectedly fine; vain; ostentatious; showy, and ridiculous: foppling is the diminutive of fop, a fool half-grown; a thing that endeavors to attract admiration to its pretty person, its pretty dress, etc. In composition it makes fop-doodle, a fool double-distilled; one that provokes ridicule and contempt, who thrusts himself into danger with no other chance than a sound beating for his pains.

A person who moves or travels restlessly or aimlessly from one social activity or place to another, seeking pleasure; a trapesing gossip; as a housewife seldom seen at home, but very often at her neighbor’s doors.

When a vulgar, blustering fellow asserts that he is a gentleman, the retort generally is, “Yes, a gentleman of four outs,” that is, without wit, without money, without credit, and without manners.

A simple, easy person, who suffers himself to be made a fool of, and is readily persuaded to any act or undertaking by his associates, who inwardly laugh at his folly.

A short person, man or woman.

A covetous or gluttonous person.

A discontented person; one who is always railing at the times.

One whose buttocks may be seen through his pocket-hole; this saying arose from the old philosophers, many of whom despised the vanity of dress to such a point as often to fall into the opposite extreme.

A piece of bread soaked in milk; a soft, effeminate, girlish man; one who is devoid of manliness.

A little man or woman.

An effeminate man, one who malingers amongst the women.

A rogue or villain.

A brutal fellow; a pugilistic bully.

A bold or forward person.

One who contrives to give himself vexation; a self-tormentor; a hypochondriac.

A worthless fellow; a rascal.

A man void of every principle of honor.

A miser; a covetous wretch, one who, if possible would take the skin off a flint.

Parasite; one that cannot rise in the morning.

Foolish, half-witted, nonsensical; it is usual to call a very prating shallow fellow, a “rank spoon.”

A stingy or ungenerous person.

A loutish youth who has never been taught manners; from the tradition that a bear’s cub, when brought into the world, has no shape or symmetry until its mother licks it into form with her tongue; ill-trained, uncouth, and rude.

Verbal critics; and also, persons who use hard words in common discourse.

A person prone to lying.