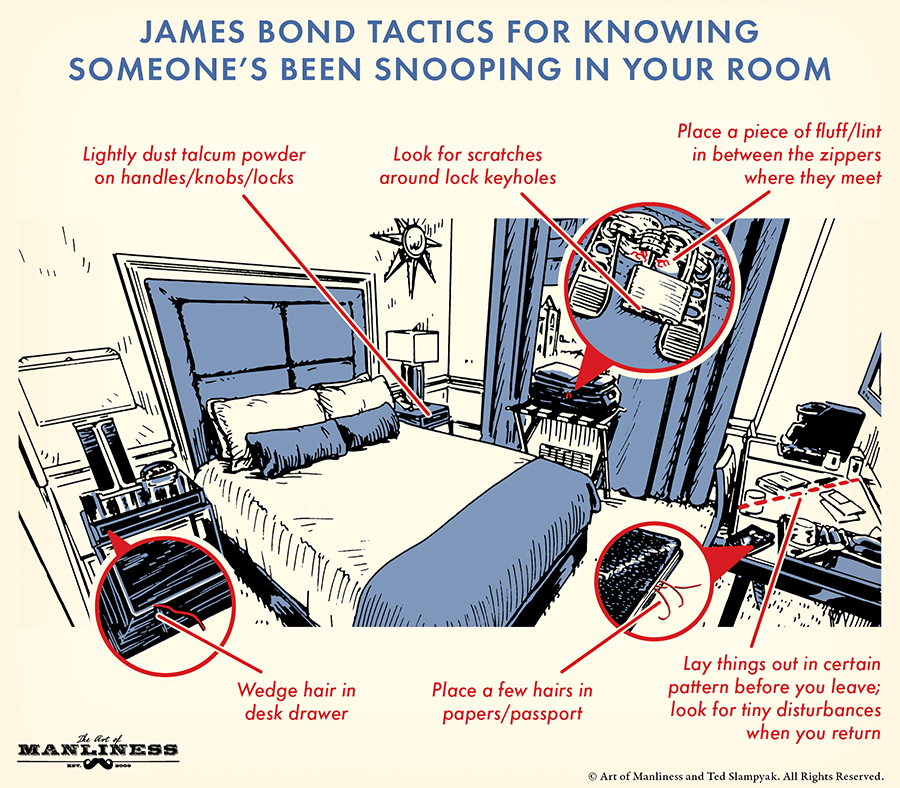 “Doing all this, inspecting these minute burglar-alarms, did not make him feel foolish or self-conscious. He was a secret agent, and still alive thanks to his exact attention to the detail of his profession. Routine precautions were to him no more unreasonable than they would be to a deep-sea diver or a test pilot, or to any man earning danger-money. Satisfied that his room had not been searched while he was at the casino, Bond undressed and took a cold shower.” —Casino Royale, by Ian Fleming

When James Bond was out on assignment around the world, he sometimes stayed in nice, swanky hotels. Yet while 007 always got some pleasure out of these stays, he couldn’t afford to relax and drop his guard; when on the job, Bond was in constant danger of being counter-spied on and ambushed. Thus, when he stepped out of his room, the vigilant secret agent always left “minute burglar alarms” that would detect the intrusion of his antagonists and alert him to the fact that someone had gone through his belongings while he was away. A hair (plucked from his head; you could use thin thread or lint) here, a faint dusting of talcum powder there, left telltale evidence of a disturbance.

Whether you’re at home or in a hotel, in the business of earning “danger-money” or just a teenager who wants to know if Mom or Dad’s been snooping in your room, the tactics above — all drawn from Bond’s various adventures — will help you know if someone’s been poking through your things.

2: Look for scratches around lock keyholes.

3: Place a piece of fluff/lint in between the zippers where they meet.

5: Place a few hairs in papers/passport.

6: Lay things out in certain pattern before you have; look for tiny disturbances when you return.