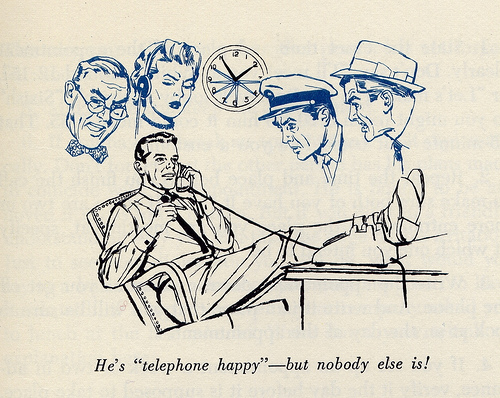 This is the second in a series of posts about living the virtuous life like Benjamin Franklin.

Clearly, Ben was not referring to monastic solitude when he presented silence as a virtue. Instead, he had in mind the ability of knowing the appropriate time and words to speak. A gentlemen has always been judged by his manner of speech, yet our modern age presents a host of difficulties in this area that Franklin never faced.

Whether because of selfishness or simple ignorance, many men are drowning as they attempt to navigate the waters of proper communication. Here are four areas in life where men can apply the virtue of silence and make the world a bit more enjoyable for everyone.

The Cell Phone: Applying the Virtue of Silence With Your Cell Phone

Much of our conversations now take place over the ever ubiquitous cell phone. Just as World War I was especially bloody because the technology in artillery had progressed faster than the development of new military tactics, so too cell phone usage is an unmannered minefield because cell phone etiquette has not kept pace with growth. But cell phone etiquette is an excellent way to show you are a well-mannered gent. Here are some rules to obey:

1. Don’t talk on your cell phone when you have a captive audience.

Remember in high school when you and your friends drove around yelling and laughing and blasting your music? You thought you were the coolest people to ever exist. Then when you reached your 20’s, you saw those same high schoolers and thought “what a bunch of jackasses.” Things always seem far more acceptable when you are the one doing it. This must be why people have loud and obnoxious conversations despite the fact that other people are trapped in proximity to them. Just remember when you are tempted to do this: you’ve seen that guy; don’t be that guy.

2. Don’t talk or answer your cell phone while talking to ANYONE in person.

Don’t answer your phone while holding a conversation with an actual human being. There are no exceptions to this rule. Think about it: if you were at a party conversing with a friend, and someone else walked up, would you immediately cut off the conversation with the first friend and abruptly turn your attention to the new person? Well maybe you would, but you’re probably a tool.

3. Don’t use your phone in any place in which people expect a certain atmosphere.

There are certain situations in which people expect a respectful quiet to prevail. A cell phone should not burst this bubble of ambience. Thus, you should never use your cell phone at funerals, weddings, classes, church services, movies, plays, museums, ect. By even allowing your cell phone to ring, never mind speaking into it, you announce to the world that your conversation is more important that the ruminations of everyone else in the room. It is the height of arrogance. People will protest that their calls are very important. To which I say, what did people do in the 90’s?? For that matter, what did people do for almost the entirety of human existence? Somehow our ancestors kept on living. You will too.

It is better to keep your mouth closed and let people think you are a fool than to open it and remove all doubt. ~ Mark Twain

Listen to My Podcast With Erling Kagge About the Adventure of Silence:

Today men are often pressed for time, stressed, and subject to daily annoyances. These frustrations are then frequently taken out on those in the service industry. Often made to feel like peons in their normal lives, these men see their interactions with people in the service industry as an opportunity to finally be treated like a king and boss someone around.

1. Don’t unload your anger on those who are not at fault for your problem.

Uncouth is the man who takes out his frustrations on whoever is in closest proximity whether it is their fault or not. This guy will yell at the waiter if there is a hair in is food. He will yell at the computer support representative because his computer crashed. He will yell at the person at the airline ticket counter because he was late and the plane didn’t wait for him. Save your indignation for the the real cause of your problem, especially if that person is you.

2. Don’t talk on your cell phone while simultaneously talking to someone serving you.

Some people will talk on their cell phone while they place their order and pay for it. These people believe that the person running the register is just an automaton designed to do their bidding, and thus they need only devote ï¿½ of their attention to addressing this robot. They also believe the person they are talking to on the phone doesn’t mind being ignored periodically. They are wrong on both counts.

3. Have a little patience

In Italy, people linger over their dinner for hours as several courses are slowly brought out. In America, men blow their top when their blooming onion appetizer comes out 5 minutes too late. And they act like their grandma died if their burger has been topped with the wrong cheese. These men believe that paying $8.00 for a meal entitles them to be king for a day. They are in serious need of some perspective.

4. Err on the side of understanding

Before you berate someone for what you believe is sub par service, take a moment to put yourself in their shoes. Is your waiter slow in bringing out your order? His section probably just got slammed, some kid knocked over his soda on the floor, and one of the cooks called in sick. He may well be doing the best he can. We never fully know what happens behind the scenes of people’s lives. The cranky woman making your coffee was just served with divorce papers. The scatter brained woman checking out your groceries is having trouble concentrating because her child is sick in the hospital. You never know the whole story. So cut these people some slack.

Do not speak unless you can improve the silence.

The Internet: Applying the Virtue of Silence on the Internet

The beauty of the internet is that it allows free flowing communication in an unprecedented way. Yet this also means that communication on the internet is not subject to the same rules of etiquette that apply to public life. Extreme crassness and incivility plague forums and blogs. It’s as if there is a competition on who can come up with the most shocking and caustic thing to say. This severe form of incivility creates an environment of hostility that hinders productive dialogue and debate.

The internet provides a cloak of anonymity behind which people feel free to say whatever they want. Yet the words which we both write and speak are our creations. We must take ownership for them. Never write something you would not be proud to have attached with your real name. Before you hit “Send” in an email or a blog comment, stop and ask yourself: “Would I use these words if this person was standing right in front of me?” If not, reword your communication. Just taking the time to think before you publish something on the web can help increase the amount of civility on the net.

Certainly here at AoM, and on the internet in general, you are free to disagree with the ideas of others. But do not personally attack the people behind those ideas. Many a blog user will make a valid comment only to end with “You’re an idiot!” And some will dispense with the valid argument part altogether. Using personal attacks adds nothing to the conversation and only shows that you do not have anything insightful or intelligent to offer.

Here on the internet postmodern deconstruction is alive and well. Many an internet user’s energy is devoted to poking holes in every idea that crosses their path. But cynicism is easy. Chronic debunkers don’t do any of the hard work it takes to create something, and then they barely lift a finger to tear things down. Digg users are notorious for this. There could be a post about a man saving a bus load of lavender smelling babies from a river and some digg user would find a way to make a snide, caustic comment about it. There’s nothing wrong with criticism, but be constructive with your criticism. If you have nothing substantive to add to the conversation, it is better to be silent.

Nothing shows a juvenile mentality and a lack of class like excessive vulgarity. While salty language has been on the rise in normal conversation as well, the proliferation of profanity on the internet is excessive. Because of the information glut on the internet, men feel they must pepper their comments with over the top language to keep them from being lost in the shuffle. But if such additions are needed to get attention, you clearly did not have anything meaningful to say in the first place. Before you publish a comment with the F-bomb used as every other word, try to find another, more respectful way to say it.