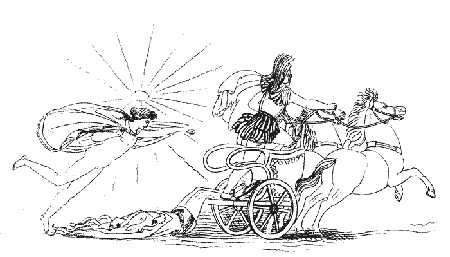 Our popular image of manliness usually consists of a man with a cocky swagger, a rebel who blazes his own path and stands confident and ready to take on the world. “Humility” doesn’t seem to fit into this image. Humility oftentimes conjures up images of weakness, submissiveness, and fear. But this is a false idea of humility. Real humility is a sign of strength, authentic confidence, and courage. It is the mark of a true man.

The Hubris of Achilles

The ancient Greeks often wrote about the importance of humility. A reoccurring theme throughout their literature was the shameful, often fatal effects of hubris-excessive, arrogant pride. For the Greeks, hubris meant thinking you were wise when you were not. One story that drives home the importance of manly humility is Homer’s The Iliad.

Throughout The Iliad, we find young Achilles, the invincible Greek soldier, sitting in his tent pouting because King Agamemnon took his slave woman. All the while, Achilles’ countrymen are dying at the hands of the Trojans. Even when Agamemnon apologizes and gives back the woman in hopes that Achilles will start fighting, Achilles still acts like a little bitch and refuses to do so. In fact, he starts to pack up to head back to Greece. He demonstrates a complete lack of humility. While his comrades perish, he seeks to save his own skin because of an inflated sense of self-importance and his arrogant pride.

This pride then results in the great Trojan, Hector, killing Achilles’ friend. It is only then, after it has become too late, that Achilles decides to fight. Even so, it isn’t even for his country; he is motivated by the pull of revenge. After Achilles kills Hector in battle, in an act of complete dishonor, Achilles ties up Hector’s body to a chariot and drags it around the walls of Troy for nine days.

While many today think of Achilles as a hero, to the ancient Greeks he embodied the shameful consequence of hubris. While they admired his legendary fighting ability, the real lesson they took from his story was the need to be humble.

The definition of humility need not include timidity or becoming a wallflower. Instead, humility simply requires a man to think of his abilities and his actions as no greater, and no lesser, than they really are. Real humility then mandates that a man knows and is completely honest with himself. He honestly assesses what are, and to what magnitude he possess talents and gifts, struggles and weaknesses.

Humility is the absence of pride. We are taught to think pride is a good thing. But pride functions only when comparing others to yourself. Don’t base your self-worth on how you stack up to others. Instead, focus on yourself and how you can improve. C.S. Lewis said the following about pride:

The point is that each person’s pride is in competition with everyone else’s pride. It is because I wanted to be the big noise at the party that I am so annoyed at someone else being the big noise. Two of a trade never agree. Now what you want to get clear is that Pride is essentially competitive-is competitive by its very nature-while the other vices are competitive only, so to speak, by accident. Pride gets no pleasure out of having something, only out of having more of it than the next man. We say that people are proud of being rich, or clever, or good-looking, but they are not. They are proud of being richer, or cleverer, or better-looking than others. If everyone else became equally rich, or clever, or good-looking, there would be nothing to be proud about. It is the comparison that makes you proud: the pleasure of being above the rest. Once the element of competition has gone, pride has gone.

What humility is not

In their quest to be humble, people often confuse humility with false modesty. I think we’ve all been guilty of this at one time or another. When we are recognized for a great accomplishment, we act as though what we did really wasn’t that important or that big of a deal. For example, we spend many hours meticulously putting together an excellent presentation for work, and when people praise us we say, “Oh, it was just something I threw together.” We have a tendency to devalue what we’ve done under the pretense of humility. In fact, people often take on the guise of false humility for the sake of receiving more praise and adulation from others. You want people to think “Wow, he said he just threw that together! Imagine what he could do if he had spent hours on it.” When you do something well, don’t toot your own horn excessively, but truthfully acknowledge what you accomplished.

How to practice humility

Give credit where credit is due. The prideful man will take as much credit for a success as he possibly can. The humble man seeks to shine the light on all the other people and strokes of luck that came together to make that success happen. No man rises on the strength of his bootstraps alone. Innate talent, a supportive family member, friend, teacher or coach, and lucky breaks always contribute somewhere down the line.

Don’t name/experience drop. Have you ever been in a conversation with a man who felt it necessary to interject how he’s been to Europe twice, got a 4.0 in college, dines frequently at pricey restaurants, or knows a famous author, at points in the conversation where such tidbits of information didn’t belong? These people are completely annoying and are basically trying let others know how great they are. Their exaggerated sense of self-importance leads them to demand the lion’s share of attention. These men are clearly insecure; they do not think they can win the interest of others without frontloading all of their attention grabbers. A humble man can hold back on sharing his strengths. He understands that others have equally important and interesting stories to share, and his turn will come.

Do what’s expected, but don’t make a big deal about it. My grandparent’s generation understood the idea of fulfilling your duty. In his book, The Greatest Generation, Tom Brokaw made this observation:

The World War II generation did what was expected of them. But they never talked about it. It was part of the Code. There’s no more telling metaphor than a guy in a football game who does what’s expected of him — makes an open-field tackle — then gets up and dances around. When Jerry Kramer threw the block that won the Ice Bowl in ’67, he just got up and walked off the field.

Why don’t we take a lesson from our grandfathers? Do something because you’re supposed to do it, have a little humility, and shut the hell up about it.

Perform service and charity anonymously. Prideful men want everyone to know when they do a charitable act. They drop the amount of money they donated to a cause into conversation, they post pictures of their service to Facebook, and they never miss a chance to remind someone they served of their generosity towards them. They are obviously doing service for the wrong reason: to stoke their ego and gain acclamation. Real charity is not self-seeking and is done solely for the benefit of others. Next time you do something nice, try keeping it completely to yourself. It’s a tough test of your manly humility.

Stop one-upping people. Few things are more annoying than a man who must constantly one-up others during conversation. You say, “I once went to a Rolling Stones concert.” He says, “I once had backstage passes to a Rolling Stones concert.” Whatever someone says, the one-upper must do him one better. Resist the urge to take part in these pissing contests. You usually end up with pee on your shoe anyway. If you notice someone who wants to engage in this show of one-upmanship, be the better man and let him have his moment of glory. People may talk about that guy’s exciting story the next day, but they’ll remember how much of a gentleman you are years later.