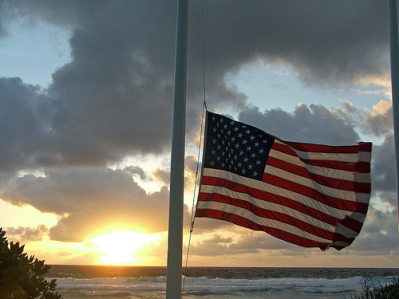 I always knew it was summertime when my old man took our American flag out of the closet and displayed it outside our house. Other dads in the neighborhood would do the
same. All down my neighborhood street, flags of red, white, and blue flapped in the humid Oklahoma air.

With summer right around the corner and all the patriotic holidays that come along with it, here’s a brief rundown on the United States Flag Code so you’ll know how to fly Old Glory with respect.

History of the Flag Code

The Flag Code was passed on June 14, 1923. Before that date, there was no federal regulation on how to display the United States flag. Both the American Legion and the VFW worked to promote flag etiquette before the passage of the Flag Code.

The Flag Code is found in several sections of the U.S. Code. 4 U.S.C. 1 pertains to the flag. 36 U.S.C. 3 covers patriotic customs and observances. The code is merely a guideline. It does not impose penalties for misuse of the American flag or for not following the guidelines.

There previously was a section in the Flag Code that contained criminal penalties for certain acts of desecration to the flag. That section was struck down as unconstitutional in the Supreme Court case Texas v. Johnson. Congress then amended the section with the Flag Protection Act of 1989. The statute imposed a fine and/or one year of prison for knowingly mutilating or physically defiling an American flag. This statute was also struck down as unconstitutional by the Supreme Court decision, this time in U.S. v. Eichman. You can read the case here. Many will be surprised that Justice Anton Scalia, an extremely conservative Supreme Court Justice, sided with majority opinion on the unconstitutionality of the statute.

Anatomy of the United States Flag

The U.S. Flag consists of a blue rectangle in the canton bearing 50 white stars representing each state. This is called the Union. The Union is offset by 13 alternating red and white stripes representing the 13 original colonies.

There isn’t a legally defined symbolism of the flag and its colors. It is said that George Washington said the following about the symbolisim of the flag:

We take the stars from Heaven, the red from our mother country, separating it by white stripes, thus showing that we have separated from her, and the white stripes shall go down to posterity representing Liberty.

When to Fly the Flag

Which Days. The flag should be displayed on all days. However, the Flag Code sets out days that it is particularly appropriate to display the flag:

Time of day. According to the Code, it’s “custom to display the flag outside only from sunrise to sunset. However, when a patriotic effect is desired, the flag may be displayed twenty-four hours a day if properly illuminated during the hours of darkness.” 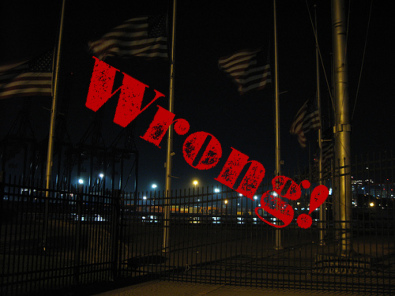 How to properly display the flag

§ 7 of the Flag Code governs the position and manner of display of the United State flag.

On Memorial Day the flag should be displayed at half-staff until noon only, then raised to the top of the staff. The President or Governor of a state can order the flag to be flown at half staff in the event of the death of public officials, foreign dignitaries, or soldiers.

The flag shall be flown at half-staff 30 days from the death of the President or former President; 10 days from the death of the Vice President the Chief Justice or a retired Chief Justice of the United States, or the Speaker of the House of Representatives; from the day of death until interment of an Associate Justice of the Supreme Court, a Secretary of an executive or military department, a former Vice President, or the Governor of a State, territory, or possession; and on the day of death and the following day for a Member of Congress. 4 U.S.C. 7(m).

Conduct during hoisting, lowering or passing of flag. One of my fondest memories is going to the annual Fourth of July parade in my hometown and watching people stand up from their lawn chairs with their right hand over their heart as the flag passed. It always gave me chills and still does.

During a ceremony of hoisting or lowering the flag or when the flag is passing in a parade or in review, all persons present except those in uniform should face the flag and stand at attention with right hand over the heart. Those present in uniform should render the military salute. When not in uniform, men should remove their headdress with their right hand and hold it at the left shoulder, the hand being over the heart. Aliens should stand at attention. The salute to the flag in a moving column should be rendered at the moment the flag passes. 4 U.S.C. 9.

Retiring a flag. Contrary to popular belief, you do not have to retire a United States flag if it has touched the ground. Just correct the situation immediately and if the flag has been dirtied, clean it by hand. 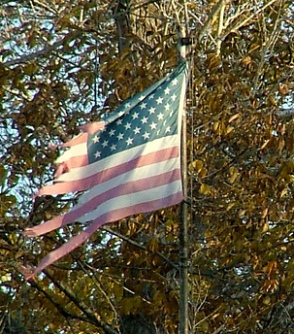 A flag need only be retired if it “is in such a condition that is no longer a fitting emblem for display. ” 4 U.S.C. 8(k). Basically this means if your flag is old and tattered, it’s time to get a new one. When a flag is retired, “it should be destroyed in a dignified way, preferably by burning.” Id.

You can always take your old flag to your local VFW for help on disposing the flag appropriately. 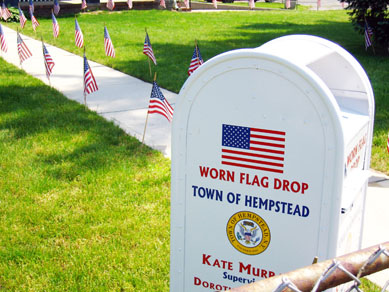 
How to Fold the Flag 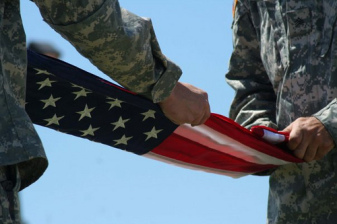 Learning how to fold the American flag was one of the first things I learned as a Cub Scout. It’s one of those things that left a lasting impression in my mind. You would always see a military honor guard fold the flag with such precision and grace. I felt pretty awesome folding the flag with the same respect they did.

1. Fold the flag in half width-wise twice.

2. Fold up a triangle, starting at the all-striped end and repeat until only the end of the union is exposed.

3. Fold the remaining square into the triangle and tuck inside the folds. A triangle of just the blue field of stars should be visible. 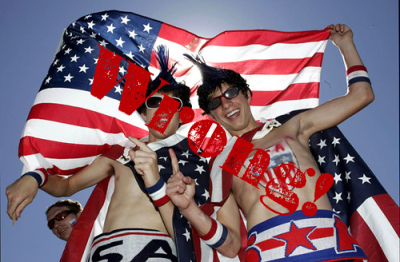 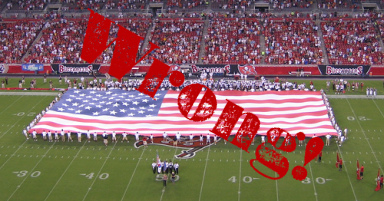 Photo by a brother monk 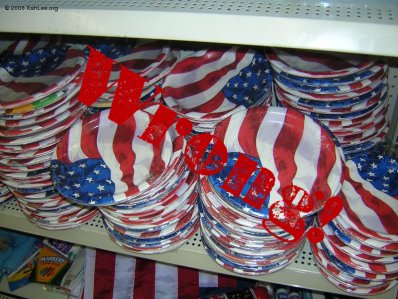 Here’s one thing that should be added to the flag code: Only buy Made in America flags. Several times I’ve been looking at an American flag, usually the chintzy plastic variety, which shouldn’t even exist, and have seen a tag saying “Made in China.” It’s enough to make Betsy Ross roll over in her grave. Americans spend over 5.3 million dollars on imported flags each year, most of them made in China. Perhaps even more disconcerting is that during 2001, in the wave of patriotism that washed over America after 9/11, American bought $52 million dollars in imported flags. The flag should symbolize the blood, sweat, and tears of American men and women who brought this country into existence, not our indebtedness to China and the death of the American manufacturing sector. So have a little pride, cough of a few more bucks, and buy an American flag made by Americans in the U S of A.