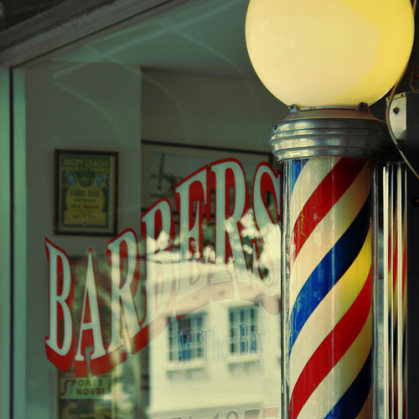 For the past few months, I’ve been having my haircut at various barbershops. For most of my life, I went to unisex salons that reeked of perm chemicals and mousse. Every time I’d go, I’d walk away with a bad haircut. On top of that, I always felt out of place. Most of the clients were usually women and a woman was cutting my hair. I’d just go in, sit there silently while the person cut my hair, and leave.

I don’t know why I stopped going to a barbershop. As a child, I went to a barbershop on the main street in my hometown. It was called “The Friendly Barbershop.” I remember being fascinated with all the barber stuff. What I remember most though, was the distinct manliness of the place. Even as a young child, I could sense that a barbershop was a cool hang out for men. Twenty years later, I’m rediscovering the barbershop. You should too.

A Brief History of Barbershops

The 1880s to the 1940s were the golden age for barbershops. During this time, men socialized in all-male hangouts, and barbershops rivaled saloons in popularity. Visiting the barbershop was a weekly, and sometimes daily habit. Men would stop in not only for a haircut and a shave, but also to fraternize with friends and chew the fat.

During this golden age, barbershops were classy places with often stunning surroundings. Marble counters were lined with colorful glass-blown tonic bottles. The barber chairs were elaborately carved from oak and walnut, and fitted with fine leather upholstery. Everything from the shaving mugs to the advertising signs were rendered with an artistic flourish. The best shops even had crystal chandeliers hanging from fresco painted ceilings.

Despite this level of luxury, barbershops were homey and inviting. A memorable and heavenly man aroma filled the air. The smell of cherry, wintergreen, apple, and butternut flavored pipe and tobacco smoke mixed with the scent of hair tonics, pomades, oils, and neck powders. These aromas became ingrained in the wood and every cranny of the shop. The moment a man stepped inside, he was enveloped in the warm and welcoming familiarity. He was immediately able to relax, and as soon as the hot lather hit his face, his cares would simply melt away.

Listen to our podcast on the history of black barbers in America: 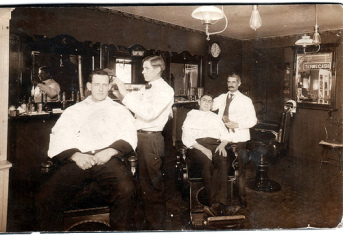 The first blow to barbershops came in 1904 when Gillette began mass marketing the safety razor. Their advertisements touted the razor as more economical and convenient than visiting the barbershop. The use of safety razors caught on, and during World War I, the US government issued them along with straight razors to the troops. Having compared the two razors size by side, upon returning home from the front many soldiers discarded both the straight razor and their frequent trips to the barbershop. Going to the barber for a shave became a special occasion instead of a regular habit.

In the decades after WWI, several other factors combined to weaken the place of the barbershop in society. Companies like Sears began selling at-home haircutting kits, and mom began cutting Junior’s and Pop’s hair. Then the Depression hit, and people cut back on discretionary spending like barber shaves. The loss of male lives in the World and Korean wars also shrunk barbers’ pool of clientele. Then in the 1960s Beatlemania and the hippie culture seized the country, and hairstyles began to change. Men started to grow their hair longer and shaggier, and their visits to the barber became infrequent or non-existent.

Even when short hair came back into style during the 1980s, men did not return en masse to the barbershop. Instead, a new type of hairdresser siphoned off the barbers’ former customers: the unisex salon. Places like “SuperCuts” which were neither beauty salons nor barbershops, catered to both men and women. Many states’ licensing boards accelerated this trend by ceasing to issue barber licenses altogether and instead issuing a unisex “cosmetologist” license to all those seeking to enter the hair cutting profession.

Why Every Man Should Go To A Barber Shop 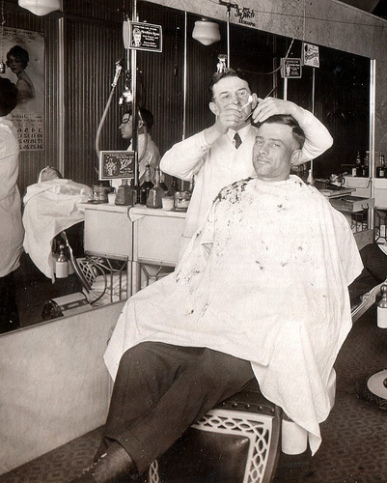 A barber knows how to cut a man’s hair. If you’re like most men these days, you’re probably going to some unisex chain salon like Supercuts. I used to do it too. Most of the time, I’d walk out of these places with a crappy haircut. Sometimes, my haircut would look decent for the first week or so, but then it would grow out into a horrible bowl.

A barber is trained to cut with clippers, the main tool in cutting a man’s hair. Cosmetologists, on the other hand, are trained to use scissors. Their training is also geared towards catering to women’s hair. They become experts in styling, coloring, and perming — things a man has no need for. That’s why when you ask the cute stylist at SuperCuts to use the number 2 on the clippers, you walk away with a bad haircut. She’s probably not well versed in how to use them. But a barber can employ the clippers with finesse.

Barbers, on the other hand, are interesting guys with interesting stories to tell. On my visits to the barber shop, I’ve met a retired Army Ranger colonel, a musician who spent 13 years on the road in a jazz band, and a man who is the third generation in his family to take up the profession. Each of them had fascinating stories to share. And I in turn feel at ease to say what’s on my mind. There is conversation about politics, cars, sports, and family. Guys read the newspaper and comment on current events. In between the banter, jokes are told and laughs are had. And everyone is involved: the barbers, the customers getting their haircut, and the customers waiting to get their haircut. Adding to the enjoyment is that a variety of men take part in the conversation; young, old, and middle-aged join in the mix.

I think there’s a good argument that barbershops are among America’s last civic forums. Where do people go today just to talk with others in the community? Coffee shops? Every time I go to a coffee shop, people are at their own tables minding their own business. The only other place that I can think of is a bar, but bars are now co-ed instead of being bastions of manliness. Graduate student Melissa Harris-Lacewell wrote an article about how discussions in traditionally black barbershops shape political ideas in the African-American community. She noted how political debate in barbershops can be vigorous and engages young and old alike. Unfortunately, white Americans are missing out on this experience. So, if you’re wanting to get your thumb on the pulse of civic life in your community, head over to the barbershop.

You can get a great shave. Many barbershops still give traditional single-blade razor shaves. You haven’t lived until you’ve experienced the pleasures of a great shave at a barber. This past weekend, I went to a barber here in town to get a shave. I reclined in the plush old school barber chairs that had ash trays in the arm rests, a throw back to a time when people could smoke in public places. Then my shave commenced. The barber first wrapped a hot towel around my face. Next, the barber massaged in a lemon-based cream to clean out my pores.

After that, several more hot towels were applied. By then, I was feeling nice and relaxed, on the verge of falling asleep relaxed. The barber then massaged in some cocoa butter to soften my beard. Next, the barber brushed a warm lather into my beard that smelled like man and not like that crappy artificial goo you buy in a can. The barber then took a piece of razor sharp metal and scraped my beard off for the closest, best shave I’ve ever had. Allowing another man to hold a razor to your neck is a good way to remind yourself that you’re alive.

To finish it all off, I got another hot towel wrapped on my face along with a final face massage with a soothing vanishing cream. When I stepped out of the shop, I felt like a new man, ready to take on the world.

It’s a great activity to do with your father or son. Men need traditions that can help bond them together. Visiting the barbershop with your father or son is a great tradition to begin in your family. Many men have been going to the same barber all their life and have introduced their sons to the same chair and the same barber. What a great way to bond with the men in your life!

You’ll feel manlier. Every time I go to the barber shop I just feel manlier. I don’t know what it is. Perhaps it’s the combination of the smell of hair tonics and the all-man atmosphere. But more so, it’s the awareness of the tradition of barbershops. Barbershops are places of continuity; they don’t change with the shifts in culture. The places and barbers look the same as they did when your dad got his hair cut. It’s a straightforward experience with none of the foofoo accouterments of the modern age. There are no waxings, facials, highlights, or appointments. Just great haircuts and great conversation.

When you walk out of the barber shop with a sharp haircut, you can’t help but feel a bit of manly swagger creep into your step. So next time you spot that familiar red and white striped pole, stop in. You’ll be glad you did.