This is the eleventh post in a series about living Ben Franklin’s 13 virtues. 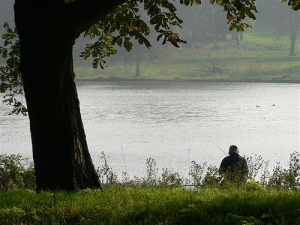 “TRANQUILLITY. Be not disturbed at trifles, or at accidents common or unavoidable.”

Every day we encounter a thousand little annoyances. Some jerk cuts us off on the way to work, we get a flat tire, someone takes our lunch out of the fridge, and so on. While each incident is seemingly small, they burrow under our skin and fester there. The mundane indignities of life threaten to snuff the very life out of us. We can soon find ourselves exploding at the smallest irritations. We become angry all the time.

In Western society, anger has sometimes been associated with toughness and manliness. We secretly applaud the hothead who finally loses it on the nincompoop who screwed him over. But anger is often a blustery cover for a man who is insecure and weak and has no other recourse to solve his problems and make his point. Truly manliness means being as coolheaded and unflappable as possible no matter what the situation.

Many men use two equally detrimental methods to deal with their anger. Some seek cantharis by giving their anger free reign. But this only magnifies the anger and can have negative consequences for both the angry man and those around him. Other men try to stuff their anger deep down inside. This buried anger eats at their insides and transforms them into bitter and cynical men.

Anger is one of the key primal passions that you must learn who how to harness. Harnessing your anger will give you strength to reign in your other carnal tendencies. It will also help you make decisions rationally. When you’re angry, you’re not thinking clearly. You may make rash decisions that you will later regret.

Not all anger is without merit. When you learn to harness your anger, you can begin to use anger as a tool. Righteous anger, properly channeled and employed, can drive a man to fight personal, societal, and global wrongs. But when faced with “trifles and accidents common or unavoidable,” the virtue of tranquility must prevail.

Frequent anger is bad for your health. We may think of anger as an emotion, but it affects your physical body as much as your mind. No matter what triggers your anger, whether something truly threatening like a push from an angry drunk, or something small like a billing error from your cell phone provider, your nervous system reacts the same way:

Your breathing gets faster.

Your pulse gets faster.

As you heat up, you begin to sweat.

You may notice sudden headaches.

In prehistoric times this “fight or flight” reaction was enormously helpful. It put you on hyper-alert so that you were ready to take action, whether that was putting up your dukes or high tailing it out there. These days, your body gets all hyped up but then has no outlet to channel this energy into.
Frequently triggering anger’s hormones hurts your heart. Studies have found that men who have normal blood pressure, but high levels of anger are more likely to develop coronary artery disease or have a heart attack. Men who lose their temper the most are three times as likely to have a heart attack as the least angry. Young men, even without a family history of heart disease, who quickly react to stress with anger, are at three times the normal risk of developing premature heart disease and five times more likely to have an early heart attack than their more tranquil peers. Angry men are also more prone to depression and other negative behaviors.

Anger hurts those around you. If you want others to respect and trust you, you must learn how to control your temper. If you explode at every little thing, your co-workers, friends, and family will start to walk on egg shells around you. They’ll constantly fear setting off your temper and feel insecure in your presence. The harm your anger can cause is well-illustrated by the following story:

A BAG OF NAILS

Once upon a time there was a little boy with a bad temper. His father gave him a bag of nails and told him that every time he lost his temper, he should hammer a nail in the fence. The first day the boy had driven 37 nails into the fence. But gradually, the number of daily nails dwindled down. He discovered it was easier to hold his temper than to drive those nails into the fence.

Finally the first day came when the boy didn’t lose his temper at all. He proudly told his father about it and the father suggested that the boy now pull out one nail for each day that he was able to hold his temper. The days passed and the young boy was finally able to tell his father that all the nails were gone. The father took his son by the hand and led him to the fence.

“You have done well, my son, but look at the holes in the fence. The fence will never be the same. When you say things in anger, they leave a scar just like this one. You can put a knife in a man and draw it out, it won’t matter how many times you say ‘I’m sorry’, the wound is still there.”

Harnessing Your Anger and Practicing Tranquility

A lot of “anger management” gurus recommend that when you get angry, you should count to 100 or take deep breaths before reacting. I don’t think these methods are effective; once anger takes a hold of you, there’s no way you’re going to sit there and twiddle your thumbs before taking action. Instead, you must train your mind to deal with anger before you are confronted with it. You must change your whole mindset, so when irritations beset you, you are ready and prepared to meet them calmly.

Change your perspective on life. Although you may not be conscious of it, the reason you get angry at life’s little annoyances, is that you believe life is supposed to go smoothly. Therefore, when things don’t go your way, you experience this as an irritating deviation from the norm. You must settle in your mind the fact that the nature of life is frustrating and chaotic. When things fall into place, that is the true deviation. Dispense with your unrealistic expectations for life and you will find it far easier to roll with the punches.

Change your perspective on yourself. While some say the root of anger is fear, I believe the heart of anger is selfishness. The angriest of men not only believe life should go smoothly for them, they DEMAND that it does. Angry men feel morally superior to others and thus believe that people should consistently agree, respect, and appreciate them, always kowtowing to their wishes. When this fails to happen, the angry man is hurt and channels this disappointment into anger. The angry man believes that it is okay for others to suffer life’s indignities, but not him. To alleviate anger, you must get off your high horse.

Change Your Perspective on Others. When you mess up or treat someone badly, you often feel bad and find the reason for your offensive behavior. You think things like, “Man, I shouldn’t have yelled at him like that. I haven’t been getting a lot of sleep lately and I really feel ragged.” Or “I shouldn’t have cut off that guy, but I have to get to that appointment on time or I might get fired.” Yet, when others do similar things to us, we bubble over with anger, never thinking that they might have done those things for the same reasons we did them. People make mistakes just like you do. Give others the same amount of leniency you lavish on yourself. People aren’t out to get you. They’re having a bad day or they weren’t raised with the right manners. Stop taking it personally.

Kill Your Anger with Logic

Anger, even when justified, often becomes highly irrational. Therefore, the antidote to anger is logic. You must train your mind to rationally think through the things that happen to you before choosing the proper reaction.
Be conscious of your anger and what is causing it. Anger often blinds our minds to the real root of what is bothering us. We often flip out at the closest target or the most recent trigger of our anger, when the underlying cause of the anger is deeper or lies somewhere else. You must develop the strength to be able to sit with your anger and sort through it. Once you can rationally examine your anger, you can find the root cause and address it. Part of what makes us so angry is not truly understanding what is pissing us off. Think about when a plane is delayed. When no reason is given for the delay, people get more angry than if a legitimate reason is cited. Understanding the reasons for your anger will help you defuse it. You can then rationally, but assertively rectify the situation.

Be willing to admit that you are the cause of your anger. The reason that traffic makes you so angry, is that you left home 10 minutes to late. The reason you’re mad that you wife keeps nagging you about mowing the lawn, is that you keep putting it off.