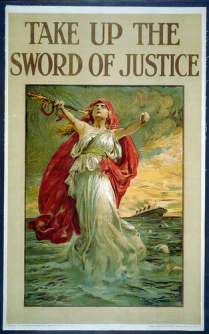 “JUSTICE. Wrong none by doing injuries, or omitting the benefits that are your duty.”

Man is a social animal. Everyday we interact with people in different capacities and relationships. In order to ensure that these interactions go smoothly, human beings have developed rights and obligations that each individual and community must recognize. The virtue of justice guides men in their quest to respect these boundaries and responsibilities.

For millennia philosophers have debated this question. Justice, like beauty or goodness, is an ethereal and hard to define concept. Catholic theologian and philosopher St. Thomas Aquinas put it quite succinctly when he defined justice as the constant and perpetual will to render to everyone his due. I think it’s the same idea of justice that Franklin had. Those who uphold the laws, rules, and standards are rewarded. Those who do not are punished. Injustice occurs when a man denies an individual or group either the punishment or reward due them.

How to develop the virtue of justice

Develop knowledge. To be a just man you must develop knowledge of the rights and responsibilities that govern your family, community, and nation. Much of this knowledge is developed simply by interacting with others and begins at a very early age. We learn that if you break something or injury someone, you should seek to restore that which you damaged by paying for what you broke or apologizing to who you hurt. We learn that when you make a promise, you keep it, and if you can’t keep it, you must make restitution for the negative results of your failure to keep your word.

While such knowledge comes to us intuitively, there are often issues of justice that may be out of our realm of experience or happen on a larger scale. Such issues often fail to garner the attention they deserve because they take effort to delve into. Apathy is perhaps the greatest impediment to justice. There are many unjust things happening in your community, state, nation, and world that fail to produce righteous indignation because men do not care to educate themselves about what is happening.

True men seek not only for justice in the events that intimately affect them, but for the fair treatment of all, even strangers. They confront injustice whenever and wherever it appears. To do this, men must have a firm grasp of culture and ideas, keep abreast of current events, and take time to travel outside of their usual sphere of life. You can develop the knowledge necessary to exercise justice with wisdom by doing the following things:

Reading good and noble books. Make it a goal to read as many of the classic works of literature that you can during your lifetime. All great books struggle with complex issues that require characters to exercise justice. By reading great literature, you develop and aggregate the knowledge that you need to exercise justice. For a list of The Great Books of Western Civilization, click here. You can find most of these books at the library or you can even find them online at Project Guttenberg.

Nothing is to be preferred before justice. ~ Socrates

Reading/watching reputable news sources. Whether online or in print form, every man should read at least one newspaper a day. Read sources with both a liberal and conservative slant in order to get a balanced viewpoint. Watching “The Daily Show” is not without merit, but supplement it by reading a news source that delves deeply into the issues. Having too little time is no excuse. Simply turn on NPR during your daily commute to get tuned in to what is happening around the country and the world. By keeping abreast of current events, you will begin to see the amount of injustice in the world, develop the ability to make judgments on how to solve these injustices, and be inspired to take action.

Travel and leave you comfort zone. While I don’t believe the need to travel is a legitimate excuse for putting off commitment, it is undoubtedly a singular way to educate yourself. When the opportunity arises, visit a foreign country and seek out places and people not found in the travel guides. Leaving your comfort zone does not have to mean leaving the country; for many men, a different part of town can be just as foreign. Make an attempt to see places even in your own city that you usually never venture. You’d be surprised at the amount of injustice that happens in your own town.

Areas in our personal life where we can exercise justice

For too many men, justice never goes beyond words and into deeds. Men in my generation tend to bitch and moan about the problems in society, politics, and the world, but fail to take any action to rectify those injustices beyond slapping a witty bumper sticker on the back of their Honda. To be fair, these men are understandably disillusioned with the power systems of the day, and the growing sense that there is nothing we can do to change them. But the deeper into apathy they sink, the truer that will become. Apathy is like a contagious disease that spreads from person to person as each individual gives up the passion to fight the good fight. The truth is that each man has the responsibility to fight for justice in any capacity he can. Here are some ways to do that:

Justice in our communications. Last week, we talked about the virtue of sincerity. When we are insincere with others, we deny that person the right to truth. This is an injustice. When we gossip about another person, we blacken the name of that person without allowing them a chance to defend themselves. This is also injustice.

All virtue is summed up in dealing justly. ~Aristotle

Justice in the public arena. Nowhere is the aforementioned disillusionment more pronounced than in the area of politics. Men today have grown completely cynical as scandal after scandal erupts and another political leader who made hopeful promises during their campaign, abandons those ideals once in office. The problem is not just corrupt politicians; however, it is the apathy of voters who voice no outcry as the ship of our democracy slowly sinks.

But it is not sunk yet. There are still a few good politicians out there and if men get more involved in the political process, more of the good apples will get in and more of the corrupt bastards will be kicked out. This can only happen if people start taking an active role in politics. Read up on the issues. Ignore the fluff that big media creates in their cotton candy machine of news. Get involved in campaigns. Donate to your candidate of choice, go door to door spreading their message, put a sign in your yard, form activist groups, distribute leaflets at school, ect. Nothing will ever change unless men start caring. Need some motivation? Watch Mr. Smith Goes to Washington.

It is in justice that the ordering of society is centered. ~Aristotle

Justice in your community. Even if many men have trouble believing they can change politics, no one can deny that change is possible when undertaken on a one to one basis. Many people in your community didn’t receive a fair start in life. We can serve the cause of justice by helping them rise to a level playing field. Find a way to volunteer and perform service for others. Become a Big Brother and mentor a young man who has gotten a short shrift in life and help him see how he can make a man of himself.

Another way you can exercise justice in your community is to stand up for individuals who you think are being abused physically, mentally, or emotionally by others. ABC News set up a situation in which a man verbally assaulted a woman in a park in order to see how many people would step in to stop it. Surprisingly, not many people did. The ones who did intervene were mostly women. What’s wrong with men? I know in America we take pride in our rugged individualism and we try to avoid getting involved in other people’s lives, but if you see an act of abuse going on, don’t stand idly by. Do something damn it!

Justice in the world. Once you start paying attention to current events, you will be struck by the amount of injustice in the world. Lots of attention is given to causes such as AIDS or world poverty. These are noble and worthy causes, but I feel that we often go about solving them in the wrong way. Throwing huge concerts to “raise awareness” about global poverty or just throwing money at poor countries is a good start but won’t solve the problem. There’s an awful lot of smug back patting that goes on at such events. The awareness wears off after a few weeks and corrupt governments in poor countries waste the money that we give them. If you’d like to fight injustice in the world, join the Peace Corps or work for UNICEF. If all you can do is donate money, make sure to donate it to a reputable non-governmental agency that will use most of your dough to help people, not pay for administrative costs. Another great way to help alleviate poverty is by funding micro-loans to enable people in developing countries to start small businesses.

If you are feeling really ambitious, start tithing. Tithing is often associated with giving to a religious organization, but it doesn’t have to be. If you don’t belong to a church, if you’re not religious, or don’t even believe in God, you can still tithe. Find a cause you’re passionate about and donate a percentage of your income to it. It can be anything! The environment, a political organization, or a charity. Donating your money to a cause or an organization is a reflection of your values. It’s your chance to put your money where your mouth is.