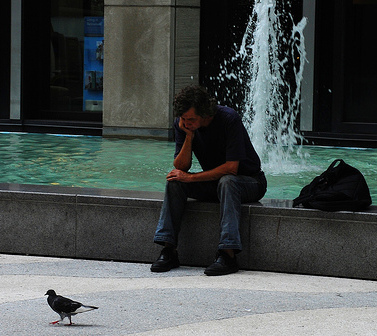 Editor’s Note: This is a guest post from Cameron Ming. Check out his last guest post on Grilling the Perfect Steak.

I was watching a program on Caligula the other night. Most should remember Caligula as one of the most inhumane, blood-thirsty, and psychotic of all Roman emperors. On the program they pointed to a turning point in his reign where he sort of just cracked. He had started out fine but about six months in he turned wacko. Some of the more notable acts of lunacy included ordering the deaths of tons of people (including his cousin), proclaiming himself a god, and wanting to make his horse a consul. As most of these programs do, there were various experts and professors that gave their commentary on Caligula’s life. One gave her opinion as to why Caligula lost his marbles. She said – and this is the kicker – he never had a chance to “find himself.”

That’s right folks, the ensuing bloodbath was all because little Caligula never had a chance to really find out who he was. Whatever. I’m not an expert on Ancient Roman History and I’m no psychiatrist, but I think that’s absolutely the lamest excuse ever.

It’s nice to know that one of the stupidest tools of justification has made its way into the big leagues. Most of the time that I’ve heard, “Oh, I really think I just need to find myself,” it involves a 20-something kid that still can’t decide what they want to do with their life. It’s typically used as a cop-out to wriggle out of committing to a woman or as a cover to continue putting off any kind of real responsibility. It’s what man-boys tell themselves while they continue to play video games 7 hours a day, get smashed every weekend, and sleep with anyone that’s willing.

Human beings have the longest childhood and adolescence of any animal in the world. You spent 22 years finding yourself. You know what you like and what you don’t like. If you are still “finding yourself” after college, it’s because you’re afraid of commitment.

Now, I’m definitely not against really understanding one’s self and truly knowing who you are (the essence of “finding yourself”) – that’s all just fine. I think that’s the key to being happy. What I do think is that anyone who consciously states he is “finding himself” is a tool. I don’t think it’s something you sit down and decide. It just happens.

The irony is that the only way to actually find yourself is by embracing commitment. I learned way more about who I really am after suffering through hardcore adversity and taking on massive responsibility than I ever have by taking some “me” time. I think that’s what real men do. You find out what you are made of and who you really are when the fight starts. Not by playing video games and sleeping around. That type of “finding yourself” is a largely selfish prospect and is ultimately detrimental to developing acceptable social skills. No real growth can come from it.

So to say that Caligula lost his marbles and banished his wife and killed his father-in-law because he never had a chance to find himself is a pretty weak argument. I’d just say he wasn’t a man and couldn’t handle the pressure.

Here are some legitimate ways a man can truly find himself:

1) Commit to a Relationship: I don’t care if it’s a puppy or a plant (but better if it’s a human), being in a relationship where someone depends on you requires you to sacrifice and make time – both things that will help you to prioritize your life and learn respect for others.

2) Get a Job and Keep it: If you’re over 22 and daddy is still paying your rent and bills, something is wrong. Get a job and make your own way. And don’t quit if it gets hard. Stick it out and be respectful to your boss and coworkers. I’ve learned a ton about myself by how I handle tense moments at work, not during a sweet 8 on 8 halo battle with my buddies. My sick Halo skills haven’t been responsible for any increase in my salary…yet.

3) Do Service for Someone that Really Needs it: Giving of yourself and your time is always nice, but to do it for someone that really needs it makes you feel all nice inside. And try this – see how long you can go without telling anyone about it. I was watching a show the other night where this millionaire kept bragging about how many poor families he fed last year. He didn’t even try to be discrete about it. Made me question his motives. If you keep it quiet then it’s truly for you and the other person. No one else needs to know.

4) Get Married: I truly believe that personal progression plateaus at a certain point. You can only do so much on your own. When you feel reasonably comfortable with yourself – it’s time to get married. No matter how awesome you thought you were when you were single, if approached properly, marriage will make you a better man. Nothing in this world has made me grow more than the honest and complete commitment I made, and continue to make, to my wife.

5) Start a Family: If you thought marriage was a test – kids will blow your mind. Not only have I learned patience, understanding, and how to handle complete frustration when dealing with my son, I have never been more aware of my virtues and flaws than when I see myself in his little actions. I have become keenly aware of my own personality as I see him reflect the behavior that he was either born with or has learned because of me. Talk about finding myself – there’s a little version of me running around my house.