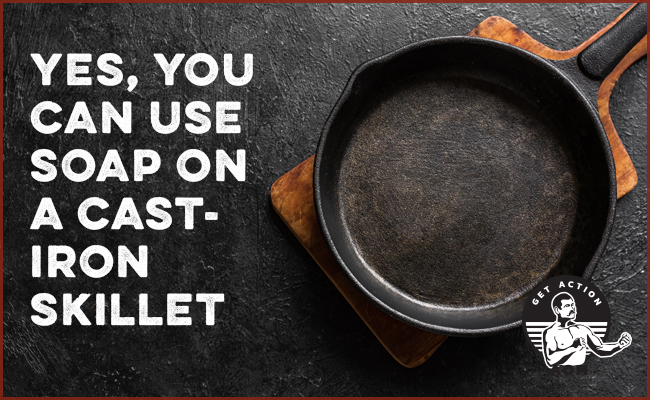 Cast-iron skillets are great. They last forever, cook pretty evenly, offer an all-natural form of non-stickiness, add a nice crust to everything from pizzas to cookies, are clutch in frying chicken, and make you feel like a cowboy out on the open range when you’re searing a steak.

But, they’re certainly not without their inconveniences. They’re heavy as heck, not as non-stick as more modern cookware, will rust if not kept thoroughly dry, and should be re-oiled after washing.

And, most annoyingly of all, cleaning a cast-iron skillet can be a pain because one of the, ahem, iron-clad laws of using this kind of cookware is that YOU NEVER USE SOAP ON A CAST-IRON SKILLET!

The reason given for this rule is that if you were to use soap, it would strip the cast iron of its “seasoning.”

Not wanting to strip my cast-iron skillet of its precious seasoning, I never used soap to clean it — just water and elbow grease.

And for the most part, that’s all I’ve needed to clean my cast iron. Thanks to its seasonsing, cleaning a cast-iron skillet has usually been fairly easy.

But, I’ve had instances of cleaning my cast-iron skillet where I’ve faced some really baked-on detritus that would have easily been eliminated by adding a bit of soap to my scrubbing. But, of course . . .

YOU NEVER USE SOAP ON A CAST-IRON SKILLET!

So I just scrubbed harder with straight water, and sometimes a layer of friction-generating salt, to get that stuff off.

A few months ago, however, I was once again scrubbing a bit of really baked-on food gunk from my skillet when the thought came to me, “Can you really not use soap on a cast-iron skillet, or is that some bit of oft-repeated-but-inaccurate folklore?”

So I googled it.

Come to find, you CAN use soap on your cast-iron skillet. It will not ruin or strip off its seasoning.

Lodge Cast Iron says you can.

Serious Eats says you can.

America’s Test Kitchen says you can.

As my grandfather, and cast-iron skillet aficionado, William D. Hurst would say, “I’ll be damned.”

So if Lodge Cast Iron, finemakers of cast-iron skillets for over 120 years, says you can use soap when cleaning your cast iron, where did the idea come from that using soap on it was some sort of mortal sin punishable by being cast down to the seventh layer of cooking hell?

Well, it’s because there was a time when using soap on cast-iron cookware would strip off its seasoning. But that time was fifty-plus years ago when dish soaps used harsher active ingredients like lye and vinegar. A lye-based soap would definitely damage your skillet’s well-earned patina and damage the pan’s underlying iron. So using soap on your cast-iron was a big no-no.

Modern dish soaps don’t use lye or vinegar. They’re actually pretty gentle. So gentle, in fact, you can use them to wash your hands on the regular without irritating them. Despite being mild, they’re able to cut through tough grease and oil effectively.

You might be thinking, “If modern dish soap cuts through grease and oil, then surely it will strip off cast-iron seasoning since seasoning is made up of oil.”

However, as Serious Eats points out, seasoning isn’t just oil. It’s polymerized oil. It’s an important distinction. Polymerized oil is oil that’s been “broken down into a plastic-like substance that has bonded to the surface of the metal. This is what gives well-seasoned cast iron its non-stick properties, and as the material is no longer actually an oil, the surfactants in dish soap should not affect it” (emphasis added).

All of this is to say, “YOU CAN USE SOAP ON YOUR CAST-IRON SKILLET!”

How to Clean Your Cast-Iron Skillet

While all the cast-iron companies say you can use soap, they all say to do so judiciously. Try not to use it if you can; if you need to use it, use just a bit.

All the other rules of cleaning cast iron are legit: don’t soak a cast-iron skillet (if its cooking surface is covered in stubborn food gunk, put it back on the stovetop and simmer some water in it for a few minutes); don’t scrub it with steel wool (unless you’re preparing it for a re-seasoning); don’t put it in the dishwasher. Do completely dry it after washing and rub it with a very thin layer of oil.

Take care of your cast-iron skillet and it will take care of you (perhaps in cooking up these one-skillet meals) for years to come. 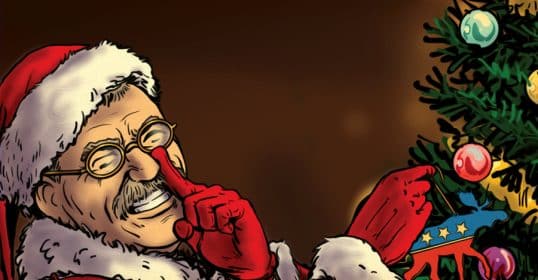