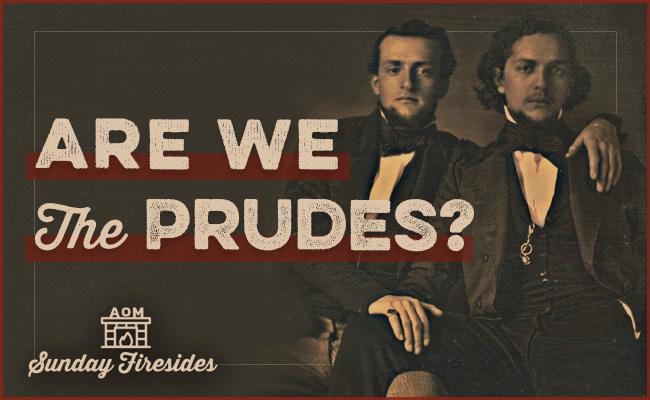 In letters men exchanged in the 18th and 19th centuries, they referred to one another as “bosom friends,” exulted in their “eternal” and “ardent” attachment, and affirmed that even when apart, “my heart is knit with thine.”

In photographs from the same era, men hold hands, sit on each other’s laps, and wrap their arms around each other’s necks.

We moderns are apt to assume that these men must have been lovers. But historians will tell you this isn’t necessarily the case. Men and women alike commonly spoke to each other in effusive terms and demonstrated a level of physical affection — in both romantic and platonic relationships — we would find foreign.

We often think of our forebearers as hilariously inhibited, and as society’s openness as moving in a progressive, linearly upwards arc.

But the evidential record belies this overly-neat narrative. In some ways, we are in fact more repressed than even the supposedly uptight Victorians.

We have an endlessly broad spectrum of sexualities with which to identify, and yet would balk at clasping the hand of anyone who is not our significant other. We can look at the nakedness of thousands of strangers online, and yet would be embarrassed to get undressed in a public locker room. We can hook up with anyone without shame, and yet struggle to admit to, and express, the yearning for a lasting relationship. We can talk in the abstract about everything that was once taboo, and yet find it difficult to share anything from the heart.

While we feel quite liberated, in every form of physical and emotional intimacy, we can really be terribly restrained.

While we pride ourselves on our permissiveness, we may go down as one of history’s most prudish societies — a people who were not only bashful about their bodies, but also shyly concealed their souls.