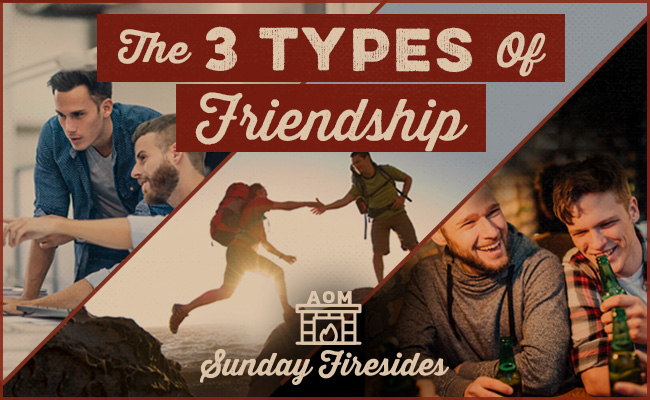 In his Nicomachean Ethics, Aristotle writes more about friendship than any other moral virtue, arguing that “Without friends, no one would choose to live, though he possessed all the other goods.”

Not all friendships are created equal, however, and he describes three types which each approach the standard of arête, or excellence, to lesser and greater degrees.

The first and lowest type are friendships of utility, wherein people associate for the sake of some external or material benefit. An example would be a group of friendly entrepreneurs who promote each other’s work.

The second type are friendships of pleasure. These companions share the same interests and sense of humor, and just generally enjoy one another’s company.

The third and highest type are friendships of virtue or “of the Good.” Each participant in such a relationship loves the other not for what they can get from him, but for his character. Between them exists mutual admiration. Such friends move side-by-side towards a common noble aim. They inspire each other to be better, and together tackle pursuits that make them such.

Friendships of utility and pleasure are not bad, per se; indeed, Aristotle says that both dynamics are included in friendships of the Good, and that delight and affection are particularly paramount in a relationship. But friendships based on utility or pleasure alone are incomplete.

Such friendships tend to be less enduring as well. Friendships of utility end when the participants no longer need something from each other. Friendships of pleasure dissipate when the pleasure does — whether because circumstances that once facilitated the good times change, or the “honeymoon” feelings of novelty simply expire.

But friendships of virtue create a connection that lasts over distance and time. For where two or more together pursue the Good, it creates something larger than themselves — something excellent, even eternal.