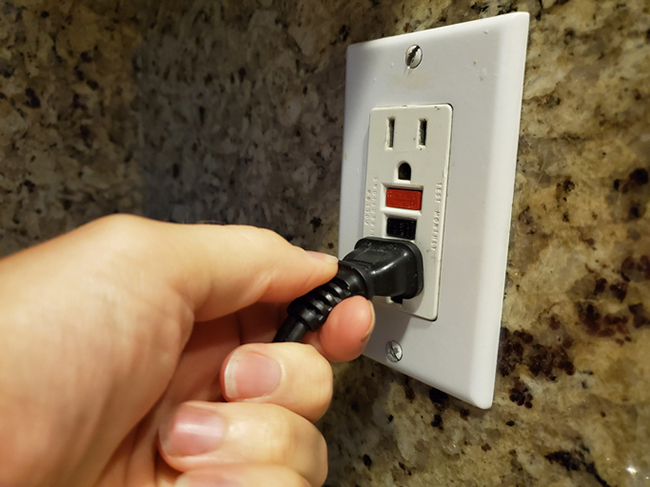 You’ve seen them around your house, usually in your bathroom and kitchen or outside.

They’re electrical outlets with a “test” and “reset” button on them. Maybe you’ve had to press the “reset” button every now and then on one when it seemed to randomly stop working.

Those outlets with the buttons are called GFCI outlets. GFCI stands for “ground fault circuit interrupter.”

GFCI outlets serve a vital function: protecting you from dying from an electrical shock.

If you’ve ever wondered how those “outlets with the buttons on them” work, read on. Below you’ll find the primer on the GFCI outlet you didn’t know you needed.

To understand how a GFCI outlet works, it helps to have a rudimentary understanding of how an outlet works in general. So let’s start off with a very elementary outline of how electrical outlets function. (Note: the outlets we’ll be focusing on here are the outlets you’ll find in North America. Other countries have other setups). 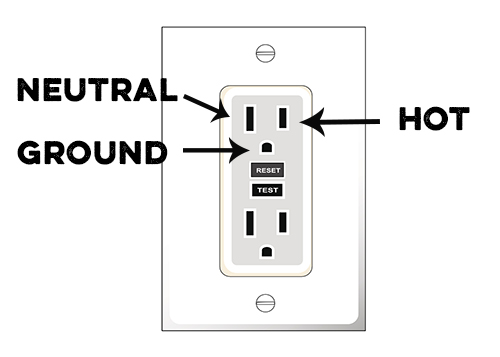 Take a look at an outlet. You’re probably very familiar with its configuration of two vertical slots and a hole. But do you know anything about these openings? Let’s zoom in a bit more:

Hot wire slot. The slot on the right is shorter than the slot on the left. The right slot is connected to the “hot wire.” This is where your electricity leaves the outlet to power your devices.

A nice electrical circuit is formed, powering your razor and keeping you safe from electric shock.

But what happens if you drop your electric razor into a sink full of water?

Well, water is a fantastic conductor of electricity thanks to the ions in it from dissolved minerals and salts.

When the current of electricity strays from a planned path to the ground, it’s called a ground fault.

You can probably see why ground faults could be potentially dangerous. If you were to pick up that electric razor from the sink full of water, you’re picking up a device that no longer has a safe, complete circuit between hot and neutral. The water is now carrying an electrical current. You grab that thing out of the sink, and — POW! — you’re going to get a shock that will send you to kingdom come.

GFCI outlets can detect ground faults and quickly shut off the power from the outlet, potentially saving you from getting electrocuted.

If the GFCI outlet senses a mismatch as small as 4 to 5 milliamps between the hot and neutral wire, it interprets this as a potential ground fault, and the GFCI outlet will shut the power off from the outlet immediately (we’re talking in as little as 1/30th of a second).

Housing codes in America require that outlets that are placed within 6 feet of a sink or water source are of the GFCI variety. So you usually find GFCI outlets in bathrooms and kitchens. You’ll also find them outdoors since those outlets are potentially exposed to water in the form of rain or snow. Many states also require that GFCI outlets be used in garages and unfinished basements.

Multiple Outlets Can Be Connected to a Single GFCI Outlet

You might have noticed that a non-GFCI outlet in your home will lose power if a nearby GFCI outlet is tripped by a ground fault.

Knowing that nearby non-GFCI outlets lose power when a GFCI outlet is tripped can come in handy when troubleshooting a faulty outlet. Often the only thing you need to do to get a non-GFCI outlet working again, is to reset the GFCI outlet that’s nearby.

Another Way to Get GFCI Protection 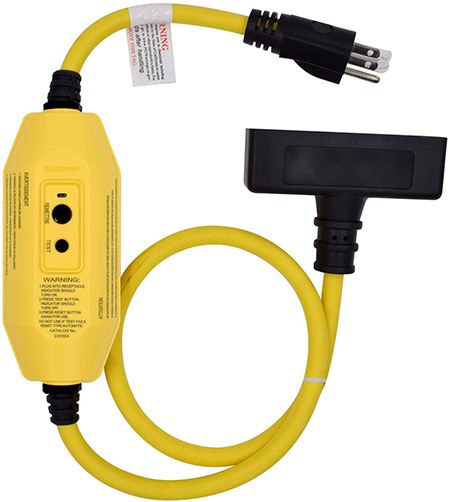 What to Do When Your GFCI Outlet Is Tripped 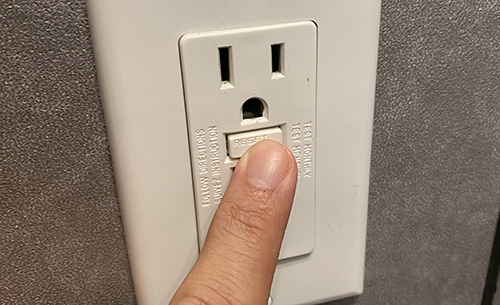 If your GFCI outlet detects a ground fault and flips off, bringing power back to the outlet is as easy as hitting its “reset” button.

Before you push the reset button, make sure to resolve any issues potentially causing the ground fault. For example, if you dropped your electric razor in a sink full of water, unplug your razor, dry it off, reset the GFCI outlet, and then plug your razor back into the outlet.

How and When to Test Your GFCI Outlets

I bet you didn’t know this: you’re supposed to test ALL of your GFCI outlets every month. It even says so on the outlet.

So test your GFCI outlets.

Simply plug an electronic device, like a hair dryer, into your GFCI outlet. Turn it on.

Push the “test” button on your GFCI outlet. The power from the outlet will shut off, and the hair dryer should too.

Press the “reset” button on your GFCI outlet. The power from the outlet will come back on, and the hair dyer should resume working as well.

Bam! You tested your GFCI outlet.

There you go. Now you know how that thing you’ve glanced at thousands of times while brushing your teeth actually works.