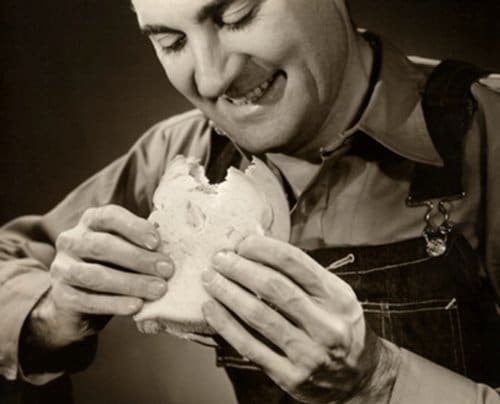 Men and sandwiches have always gone together. Sandwiches originally started out as a food enjoyed by men who wanted something convenient to fuel their nights of drinking and gaming. The food famously got its name from John Montagu, 4th Earl of Sandwich, who, in order to keep his hands from getting greasy while munching on a slab of meat during a game of cribbage, had his valet stick the meat between two slices of bread. Fast, inexpensive, portable, and filling, the sandwich grew in popularity as a convenient meal for any old time.

I know I love me a good sandwich. Reubens, Cubans, Tortas, Monte Cristos. If there’s meat, cheese, and other goodness stuffed between two slices of bread, I like it. But one of my favorites growing up, and still today, is the humble bologna sandwich.

It was standard fare whenever I brown-bagged it to school. In the summertime, it was an easy sandwich to make for my seven-year-old self. Just pull out the meat from the cold-cuts drawer in the fridge, slap some mustard on some Iron Kids Bread, and you’re in business. All washed down with a big glass of  cold milk.

As an adult, I’ve pretty much eliminated bologna sandwiches from my diet because, let’s be honest, they’re not the healthiest thing to eat by any stretch. But every few months, I get a hankering for one (especially during the summer). So I’ll go to the grocery store, buy my bologna sandwich supplies, and have a bologna sandwich splurge. It’s a wonderful thing.

There isn’t too much you can do to make a bologna sandwich any better. Its beauty is in its simplicity: bologna, white bread, American cheese, mustard, and maybe some lettuce and tomato. But below I humbly suggest two simple upgrades that can make your bologna sandwich even better. 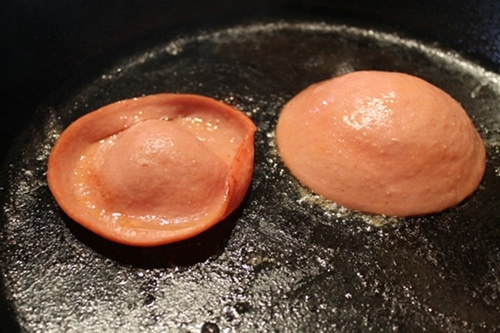 Fry up your bologna for extra tasty goodness.

1. Fry up your bologna. Growing up, my family just ate our bologna cold, straight from the fridge. It never crossed my mind that you could warm it up. Why would you? Bologna is a cold-cut after all. But a few years ago, I came across an article where a person recommended frying up your bologna before putting it in the sandwich. Intrigued, I gave it a try. When I bit into my sandwich I felt like Paul on the Road to Damascus or Neo taking the Red Pill. I experienced a paradigm shift. Fried bologna sandwiches are awesome. If you’ve never done it before, give it a try. You won’t regret it.

As it cooks, the bologna gives off a nice savory smell. Sort of like Spam. The center of the bologna puffs up, causing it to look like those half-ball jumping toys. I like to put my cheese on the sandwich and then the hot bologna on the cheese. The heat from the meat gives the cheese just the right amount of melt. 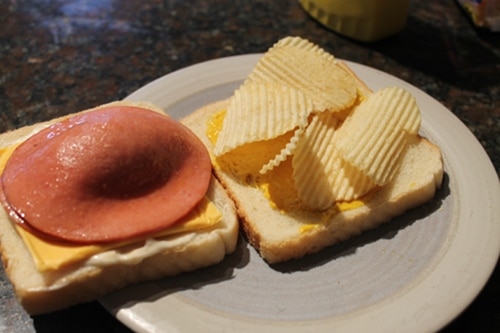 Potato chips give your sandwich a nice, salty crunch.

I actually enjoy putting chips (and Cheetos — Cheetos make every sandwich better) on most of my cold-cut sandwiches. I’ve met a few people who are chips-on-sandwich people, too. It’s fun introducing those who have no idea about the concept and seeing them become zealous converts.

The Art of Manliness Month of Sandwiches Group Project 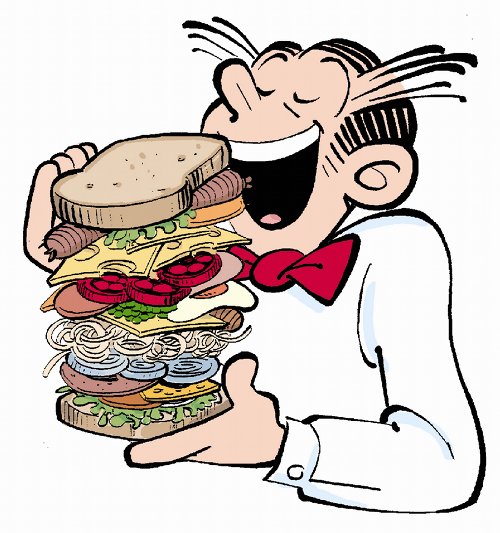 As I said earlier, I love a good sandwich and I know I’m not alone in my appreciation for this gratifying gastronomical genre. I’m always on the lookout for new sandwich combos and I thought,  what better place to get some ideas than from the amazing AoM community? That’s when I had the idea for the Art of Manliness Month of Sandwiches Group Project.

Here’s how I see it working:

1. If you have a sandwich recipe that’s a personal favorite and you think the whole world needs to know about it, please leave it in the comments below. I’m looking for all kinds of sandwiches. Simple, complex, classics with a twist, international sandwiches, breakfast sandwiches, whatever. If there’s stuff in between bread and it tastes good, I want to see it.

2. We’ll comb through and try those that look to be the best sandwich recipe submissions.

3. Every weekday in the month of April (hereby declared the AoM Month of Sandwiches), I’ll publish one new amazing sandwich recipe along with pics of me putting it together and eating the crap out of it. By the end of the month, you’ll have 22 new sandwich recipes in your sandwich-making arsenal.

To entice folks to submit a sandwich, I’ll be giving away a signed copy of Manvotionals to each person whose sandwich we feature during the Month of Sandwiches. Sound good?

Looking forward to reading your submissions! Long live the sandwich!