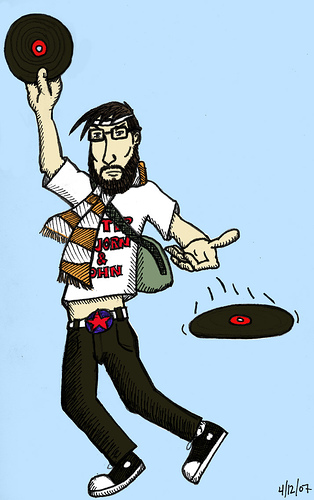 The term “indie” has a somewhat amorphous meaning. Once applied strictly to underground music and films that were not made or financed by large corporations, the label can now be applied to a whole culture. Still, it’s hard to pin down exactly what it means. So I turn to that great and reliable resource, Wikipedia:

“The most general definition of the word is to be independent from the mainstream. The word has become most often associated with a subculture defined by its associated music, fashion, behavior and beliefs. Indie culture is a lifestyle which follows social trends that are considered to consciously deviate from the mainstream. One common belief within indie culture is anti-conformity.”

Many, including the entry of Wikipedia from which I gleaned that quote, have pointed out the irony that the indie culture, while seeking to be unique and independent, has developed a somewhat uniform and readily identifiable aesthetic. Indie connoisseurs wish to be different but are surrounded by a cadre of people who dress the same, watch the same movies, listen to the same “underground” music, and spew the same arguments denouncing the banal bourgeoisie.

But such a point is overdone and easy. I’d like to explore another reason that being indie is a bunch of bunk.

The indie identity is based on the idea of being independent from the mainstream. To this end, indie people buy clothes, CD’s, furniture, books, food, and concert and movie tickets that are not popular with the masses. Instead of going to Chili’s, they frequent their local Thai restaurant; instead of going to Wal-Mart, they go to Whole Foods; instead of picking up the new Coldplay CD, they buy an album from Blood Red Shoes; instead of shopping at the Gap, they buy from American Apparel; instead of buying a Dell they buy an Apple (sure they’re a big corporation, but they’re so cool). But what is the common denominator in all of those things? Spending money. Consumption. Indie people express their independence from the mainstream by doing the single most mainstream thing possible: basing their identity on what they consume.

A decade ago it was cool to wear clothing with a company’s logo splashed all over it. Nike and Gap labels were proudly displayed as badges of honor. These days such clothing is considered laughable; now shoppers want clothes that look unique or vintage (although frequently that “vintage” tee costs $40). But the underlying motivation remains the same; people are still expressing themselves by the clothes they buy. It doesn’t matter that instead of buying things from big corporations you buy free trade coffee, organic apples, and handmade Guatemalan rugs, you’re still basing your personal identity on your identity as a consumer. You are driven by the desire to consume something first before it is consumed by the masses. It’s the new millennium’s take on “keeping up with the Jonses.” And it’s just as conformist as it was in the 50’s.

Of course there is nothing wrong with liking certain kinds of music or clothing; it is entirely possible for a man to be interested in, and consume, all the aforementioned indie products, and yet not base his identity on them. But all too often such consumption is used to buy a persona, instead of actually putting in the work to it takes to attain an authentic one. Such accouterments instantly bestow some hipster cred but do nothing to transform the inner man. A man’s identity literally becomes a coat that can be put on or taken off, and there’s nothing cool about that.

Free yourself from being defined by what you buy or do not buy. Define yourself by the things you cannot purchase: values, ethics, and what you actually do. Let your actions speak louder than your ironic message tee. Want to be truly independent from mainstream society?

-Use your free time to serve people, not numb you mind with entertainment.

–Stop “finding yourself” and embrace commitment and responsibility

-Don’t spend big bucks to look like you shop at a thrift store, actually shop at one

-Don’t be ironic and sarcastic, be sincerely passionate

-Stop being a boy and man up