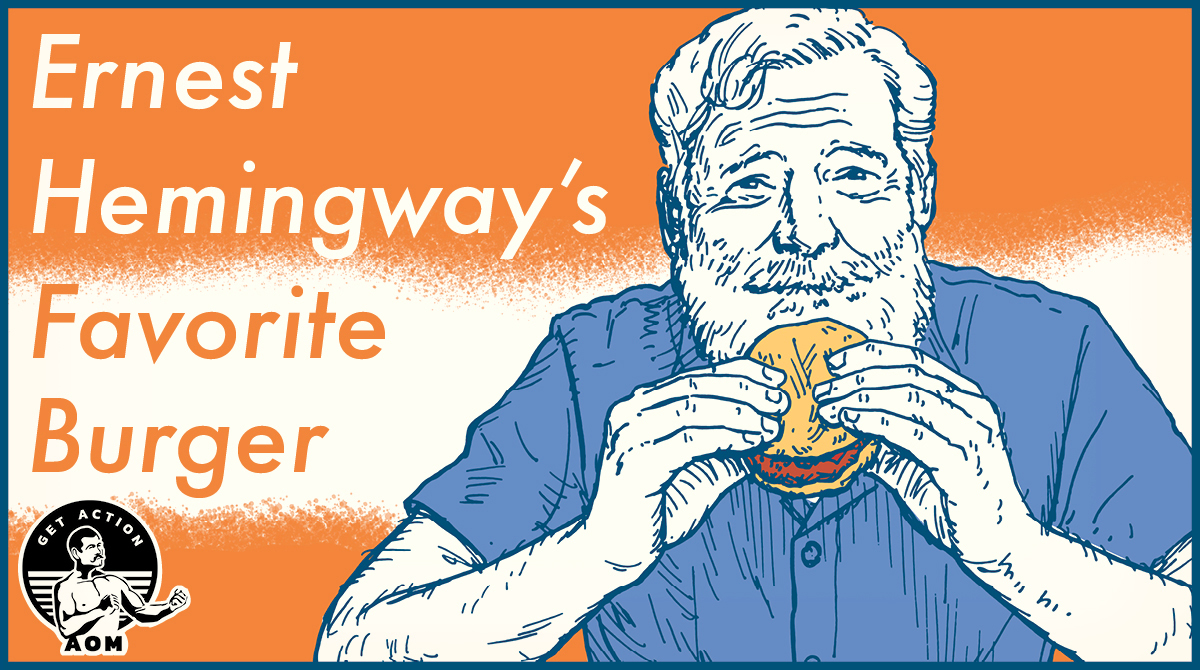 Ernest Hemingway had a huge appetite for life. Whether pounding away at his typewriter, deep sea fishing off the Florida Keys, hunting from the mountains of the American West to the savannas of Africa, or issuing journalistic dispatches and even running his own reconnaissance patrols on the frontlines of war, he had a outsized hunger for a wide range of interests — and that included food itself.

Hemingway’s intimate connection to his food started early in his childhood. When he was just a young boy, his father introduced him to the pursuits of hunting and fishing, as well as their ethics: Ernest had to eat whatever he killed. For most sportsmen, such a rule is practical (and often delicious), especially when the game consists of rabbits, venison, elk, and fowl, all of which Ernest consumed with gusto; he had a particularly punctilious recipe for campfire-cooked trout. Yet he kept his father’s rule concerning less common and conveniently cooked game as well, consuming everything from porcupine to snake to lion.

Though Papa found his solace in the wild, he also enjoyed the culinary comforts of civilization — like dining out and sipping a nice wine or refreshing daiquiri. His posthumous masterpiece, A Moveable Feast (1964), showcases Ernest’s appreciation for describing his meals. I remember serving up this specific quote to my wife, to get her to come around to the joy of oysters:

As I ate the oysters with their strong taste of the sea and their faint metallic taste that the cold white wine washed away, leaving only the sea taste and the succulent texture, and as I drank their cold liquid from each shell and washed it down with the crisp taste of the wine, I lost the empty feeling and began to be happy and to make plans.

And while he wasn’t overly domestic, Hemingway sometimes cooked at home for himself and for others; as a war correspondent, he was known to fry up a pancake breakfast on a portable stove in his hotel room and invite his fellow journalists to partake.

Most frequently though, he had his household staff cook his meals, based on recipes he had first meticulously taste-tested and formulated himself. A batch of these re-surfaced a decade ago, when in 2009 a trove of digitized documents made their way into the John F. Kennedy Presidential Library and Museum in Boston. Most of these documents came from Hemingway’s time in Cuba, a roughly twenty-year period where he produced some of his literary bests, including For Whom the Bell Tolls and The Old Man and the Sea.

While the majority of the details in this archival material were mundane, there was one particular document, made viral by The Paris Review, that captured even my attention: the recipe for Papa’s favorite hamburger.

I’ve long been a burger purist. My philosophy has been well documented: use the best meat you can find, with a nice ratio of fat to meat, and season it with salt and pepper — nothing else. Gently mound the burger into a loose patty, and cook it up in a cast-iron pan to develop a nice char, with a medium-rare center.

So I must say that I was a bit taken aback by Hemingway’s instructions when it came to preparing his hamburgers: “ground beef, onions, garlic, India relish, and capers, cooked so the edges are crispy but the center red and juicy.” Though the later cooking technique seemed on point, I felt awash in a slew of additional ingredients, some of which I naively deemed to be unnecessary.

Nevertheless, if there is one man who perhaps deserves an immense amount of trust, it is Hemingway himself. So I set about to re-create his recipe, exactly as it was written, ingredients, instructions, and all.

I inevitably hit some same snags in resurrecting this three-quarters-of-a-century-old burger formulation, however. One of the Spice Islands seasonings has since gone kaput. And India relish? I checked my local store and online, and while it’s possible to source, it’s not easy. With my beers cold in the fridge and my wife hankering for this burger, I thought it best to find the right substitute (included below). I felt less guilty about not following the recipe to a T, as Hemingway himself, or perhaps a family member, includes a slew of other ingredients scattered on the page. 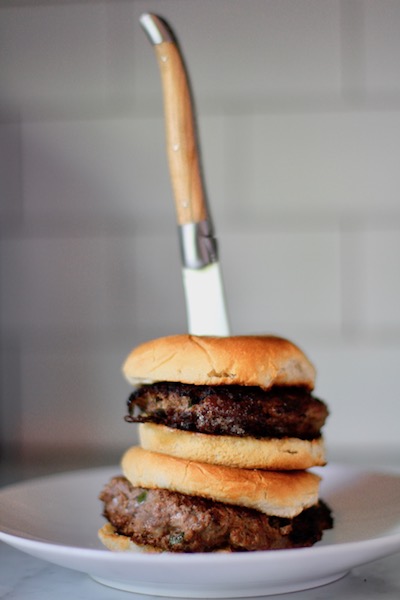 What resulted was honestly one of the best burgers I’ve had in my life. I’m not just saying that. Hell, my wife told me it was bar-none the best burger she’s ever had. The seasoned meat, when cooked exactly as described, provides a savory umami bomb of complexity, and the drippings of the burger absorbed into the bun, making condiments entirely unnecessary. I can see why a man so well-traveled, indulged, and imbibed, would go out of his way to create such a pleasure. And like most of his work, I’m simply glad he took the time to record it for others.

The recipe is quoted in its exact form below, and I added a few substitution notes after that.

How to Make Papa’s Favorite Hamburger 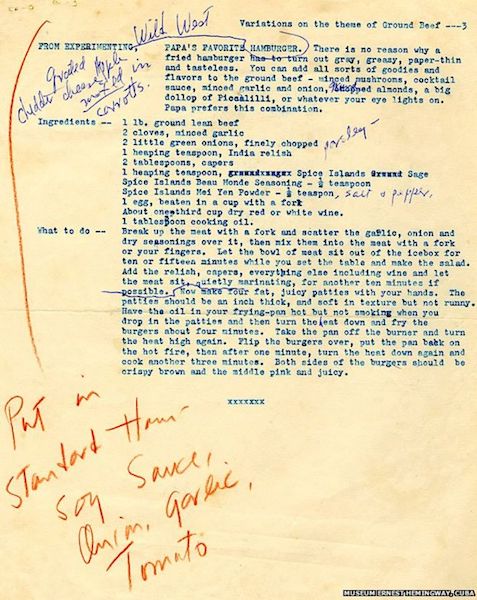 From experimenting, Papa’s Favorite Hamburger. There is no reason why a fried hamburger has to turn out gray, greasy, paper-thin and tasteless. You can add all sorts of goodies and flavors to the ground beef — minced mushrooms, cocktail sauce, minced garlic and onion, chopped almonds, a big dollop of Piccalilli, or whatever your eye lights on. Papa prefers this combination. 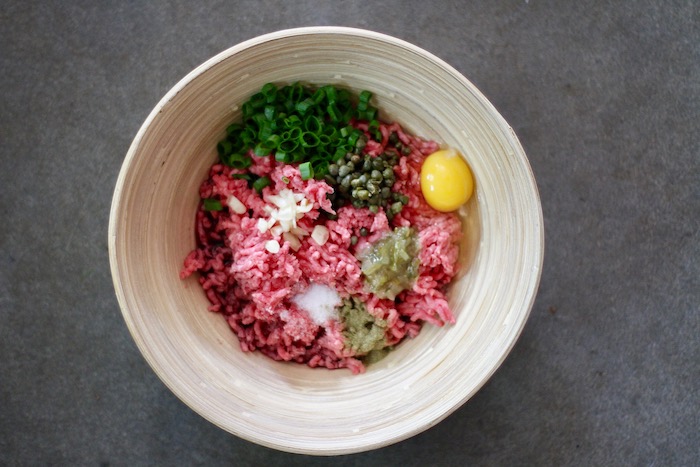 I’m showing you all the ingredients here together so you can see them at a glance. But as you’ll see from the instructions, you add them to the meat in different steps when making the recipe. 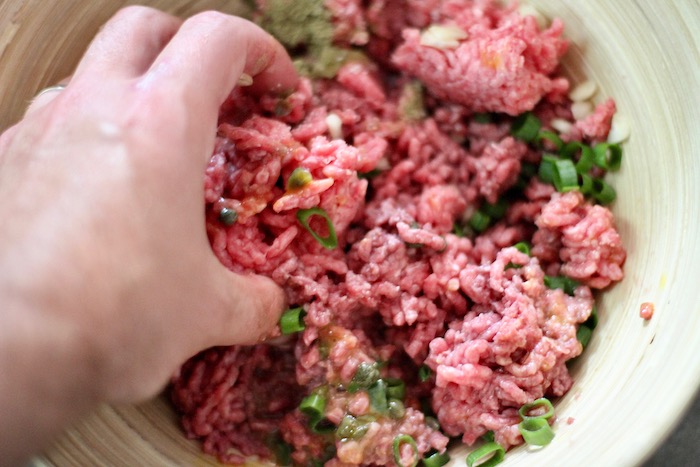 Let the bowl of meat sit out of the icebox for ten or fifteen minutes while you set the table and make the salad. Add the relish, capers, everything else including wine and let the meat sit, quietly marinating, for another ten minutes if possible. 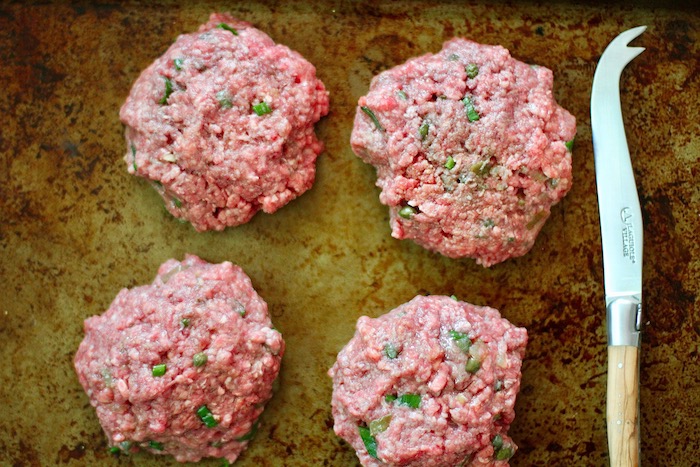 Now make four fat, juicy patties with your hands. The patties should be an inch thick, and soft in texture but not runny. 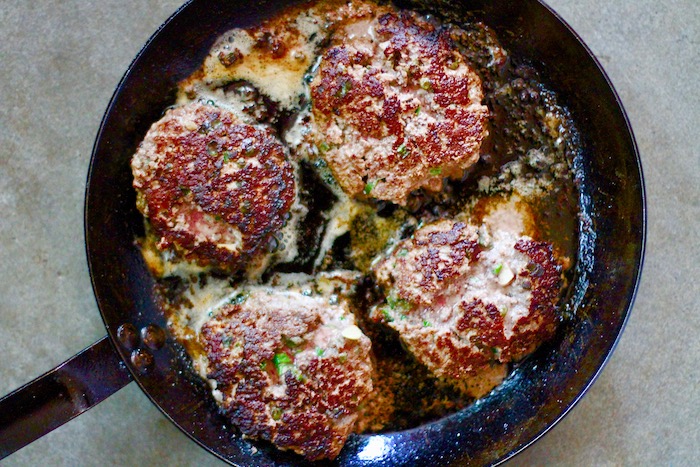