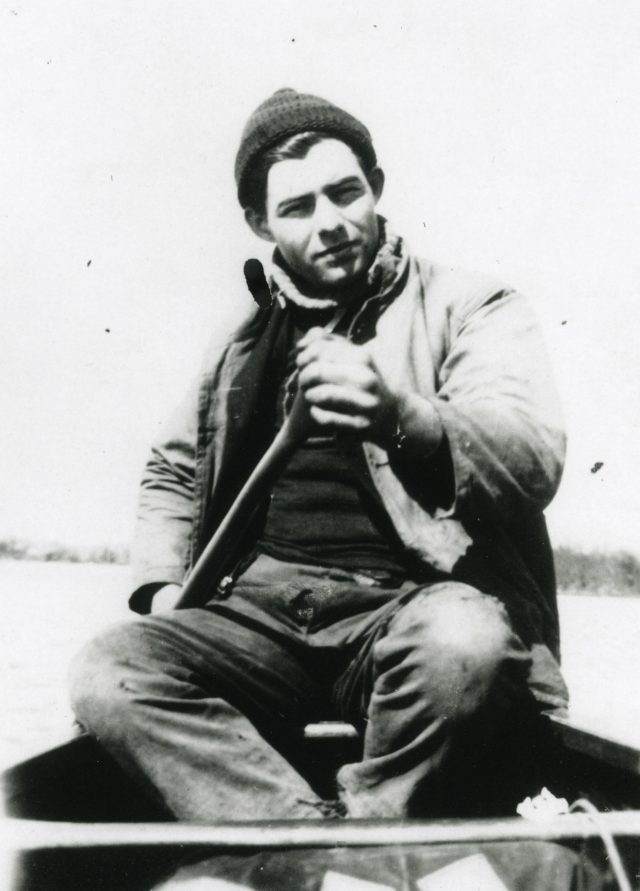 Editor’s note: Throughout Ernest Hemingway’s life, he maintained a love for the outdoors and for outdoor pursuits. This love was inculcated early, as his father took him into the woods as soon as he was able to walk, and taught Ernest the rudiments of hunting and fishing when the boy was only a toddler. Hemingway Sr. further instructed his son in how to build fires, make wilderness shelters, tie fishing flies, and cook wild game; he always insisted that Ernest eat whatever he killed. Hemingway continued to relish hiking, backpacking, camping, and fishing as a young man, and these pursuits would prove healing after his experience in WWI and throughout his adulthood.

Before he broke through as a novelist, a twenty-something Hemingway worked as a staff writer for the Toronto Star Weekly, and penned this non-fiction piece for the paper in 1920. In it, he shares his well-earned advice for old fashioned camping, including the very best way to fry trout.

“Camping Out”
By Ernest Hemingway

Thousands of people will go into the bush this summer to cut the high cost of living. A man who gets his two weeks’ salary while he is on vacation should be able to put those two weeks in fishing and camping and be able to save one week’s salary clear. He ought to be able to sleep comfortably every night, to eat well every day and to return to the city rested and in good condition.

But if he goes into the woods with a frying pan, an ignorance of black flies and mosquitoes, and a great and abiding lack of knowledge about cookery, the chances are that his return will be very different. He will come back with enough mosquito bites to make the back of his neck look like a relief map of the Caucasus. His digestion will be wrecked after a valiant battle to assimilate half-cooked or charred grub. And he won’t have had a decent night’s sleep while he has been gone.

He will solemnly raise his right hand and inform you that he has joined the grand army of never-agains. The call of the wild may be all right, but it’s a dog’s life. He’s heard the call of the tame with both ears. Waiter, bring him an order of milk toast.

In the first place, he overlooked the insects. Black flies, no-see-ums, deer flies, gnats and mosquitoes were instituted by the devil to force people to live in cities where he could get at them better. If it weren’t for them everybody would live in the bush and he would be out of work. It was a rather successful invention.

But there are lots of dopes that will counteract the pests. The simplest perhaps is oil of citronella. Two bits’ worth of this purchased at any pharmacist’s will be enough to last for two weeks in the worst fly and mosquito-ridden country.

Rub a little on the back of your neck, your forehead, and your wrists before you start fishing, and the blacks and skeeters will shun you. The odor of citronella is not offensive to people. It smells like gun oil. But the bugs do hate it.

Oil of pennyroyal and eucalyptol are also much hated by mosquitoes, and with citronella, they form the basis for many proprietary preparations. But it is cheaper and better to buy the straight citronella. Put a little on the mosquito netting that covers the front of your pup tent or canoe tent at night, and you won’t be bothered.

To be really rested and get any benefit out of a vacation a man must get a good night’s sleep every night. The first requisite for this is to have plenty of cover. It is twice as cold as you expect it will be in the bush four nights out of five, and a good plan is to take just double the bedding that you think you will need. An old quilt that you can wrap up in is as warm as two blankets.

Nearly all outdoor writers rhapsodize over the browse bed [a “mattress” made by layering the fans of evergreen boughs]. It is all right for the man who knows how to make one and has plenty of time. But in a succession of one-night camps on a canoe trip all you need is level ground for your tent floor and you will sleep all right if you have plenty of covers under you. Take twice as much cover as you think that you will need, and then put two-thirds of it under you. You will sleep warm and get your rest.

When it is clear weather you don’t need to pitch your tent if you are only stopping for the night. Drive four stakes at the head of your made-up bed and drape your mosquito bar over that, then you can sleep like a log and laugh at the mosquitoes.

Outside of insects and bum sleeping the rock that wrecks most camping trips is cooking. The average tyro’s idea of cooking is to fry everything and fry it good and plenty. Now, a frying pan is a most necessary thing to any trip, but you also need the old stew kettle and the folding reflector baker.

A pan of fried trout can’t be bettered and they don’t cost any more than ever. But there is a good and bad way of frying them.

The beginner puts his trout and his bacon in and over a brightly burning fire; the bacon curls up and dries into a dry tasteless cinder and the trout is burned outside while it is still raw inside. He eats them and it is all right if he is only out for the day and going home to a good meal at night. But if he is going to face more trout and bacon the next morning and other equally well-cooked dishes for the remainder of two weeks he is on the pathway to nervous dyspepsia.

The proper way is to cook over coals. Have several cans of Crisco or Cotosuet or one of the vegetable shortenings along that are as good as lard and excellent for all kinds of shortening. Put the bacon in and when it is about half cooked lay the trout in the hot grease, dipping them in corn meal first. Then put the bacon on top of the trout and it will baste them as it slowly cooks.

The coffee can be boiling at the same time and in a smaller skillet pancakes being made that are satisfying the other campers while they are waiting for the trout.

With the prepared pancake flours you take a cupful of pancake flour and add a cup of water. Mix the water and flour and as soon as the lumps are out it is ready for cooking. Have the skillet hot and keep it well greased. Drop the batter in and as soon as it is done on one side loosen it in the skillet and flip it over. Apple butter, syrup or cinnamon and sugar go well with the cakes.

While the crowd have taken the edge from their appetites with flapjacks the trout have been cooked and they and the bacon are ready to serve. The trout are crisp outside and firm and pink inside and the bacon is well done–but not too done. If there is anything better than that combination the writer has yet to taste it in a lifetime devoted largely and studiously to eating.

The stew kettle will cook your dried apricots when they have resumed their predried plumpness after a night of soaking, it will serve to concoct a mulligan in, and it will cook macaroni. When you are not using it, it should be boiling water for the dishes.

In the baker, mere man comes into his own, for he can make a pie that to his bush appetite will have it all over the product that mother used to make, like a tent. Men have always believed that there was something mysterious and difficult about making a pie. Here is a great secret. There is nothing to it. We’ve been kidded for years. Any man of average office intelligence can make at least as good a pie as his wife.

All there is to a pie is a cup and a half of flour, one-half teaspoonful of salt, one-half cup of lard and cold water. That will make pie crust that will bring tears of joy into your camping partner’s eyes.

Mix the salt with the flour, work the lard into the flour, make it up into a good workmanlike dough with cold water. Spread some flour on the back of a box or something flat, and pat the dough around a while. Then roll it out with whatever kind of round bottle you prefer. Put a little more lard on the surface of the sheet of dough and then slosh a little flour on and roll it up and then roll it out again with the bottle.

Cut out a piece of the rolled out dough big enough to line a pie tin. I like the kind with holes in the bottom. Then put in your dried apples that have soaked all night and been sweetened, or your apricots, or your blueberries, and then take another sheet of the dough and drape it gracefully over the top, soldering it down at the edges with your fingers. Cut a couple of slits in the top dough sheet and prick it a few times with a fork in an artistic manner.

Put it in the baker with a good slow fire for forty-five minutes and then take it out and if your pals are Frenchmen they will kiss you. The penalty for knowing how to cook is that the others will make you do all the cooking.

It is all right to talk about roughing it in the woods. But the real woodsman is the man who can be really comfortable in the bush.