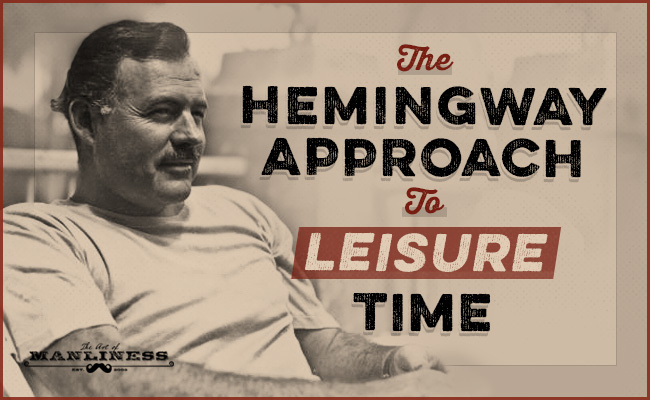 With our archives now 3,500+ articles deep, we’ve decided to republish a classic piece each Sunday to help our newer readers discover some of the best, evergreen gems from the past. This article was originally published in July 2018.

When Ernest Hemingway was working on the manuscript of a book about his safari in Africa, he played with a passage (which he later deleted) that listed all the things he loved and loved to do. He began with seeing, hearing, eating, drinking, sleeping, and reading; looking at pictures, cities, oceans, fishes, and fighting; thinking and observing; being in boats and battles or on saddle horses with “guns between your legs.”

To watch the snow, rain, grass, tents, winds, changes of season . . . To talk, to come back and see your children, one woman, another woman, various women, but only one woman really, some friends, speed, animals . . . courage, co-ordination, the migration of fishes, many rivers, fishing, forests, fields, all birds that fly, dogs, roads, all good writing, all good painting, the principles of revolution, the practice of revolution, the Christian theory of anarchy, the seasonal variation of the Gulf Stream, its monthly variation, the trade winds, counter currents, the Spanish bull ring, cafes, wines, the Prado, Pamplona, Navarra, Santiago de Compostella, Sheridan, Casper, Wyoming, Michigan, Florida, Arkansas, Montana.

Still not feeling he had encapsulated the things of life that filled his heart, he made another attempt:

To stay in places and to leave, to trust, to distrust, to no longer believe and believe again, to care about fishes, the different winds, the changes of the seasons, to see what happens, to be out in boats, to sit in the saddle, to watch the snow come, to watch it go, to hear rain on the tent, to know where I can find what I want.

In reference to the above, Hemingway’s biographer, Carlos Baker, comments: “What he really wanted was a total immersion in the sensuous experience of living. The lists were nothing more than verbal talismans to help him achieve such an end.”

Hemingway had a zeal for making the most of life, not only in his professional vocation, but in his leisure time as well. Papa always wanted to be where the action was, not just as a spectator but as a participant; he wanted to experience what the world had to offer firsthand, with all five senses. In this he certainly succeeded, becoming not only a war correspondent and writer of classic novels, but a hunter, fisherman, sailor, amateur boxer and bullfighter, and world traveler. Few others in modern history have seen, heard, smelled, tasted, and touched so much.

As discussed previously, it was a strict daily writing routine that kept up his output of words.

What may be surprising to learn about Hemingway’s life, however, is that the same disciplined approach he took to his job, was what allowed him to have so much fun outside of it.

Hemingway’s Approach to the “Challenge of Enjoyment”

I suppose the most remarkable thing about Ernest is that he has found time to do the things most men only dream about. He has had the courage, the initiative, the time, the enjoyment to travel, to digest it all, to write, to create it, in a sense. —A. E. Hotchner, Papa Hemingway: A Personal Memoir

Papa embraced what he called “the fiesta concept of life.” He was always seeking after excitement and adventure and looking to have a “hell of a good time.” Hemingway’s friend, A. E. Hotchner, “had never seen anyone with such an aura of fun and well-being. He radiated it and everyone [around him] responded.” He was always looking forward to what was around the corner, and began each day with high expectations for what it would bring. In fact, he typically stood on the balls of his feet, like a boxer, seemingly ever ready to move, to fight, to leap into action, to go.

To get at the fun he so relished, we popularly imagine Hemingway taking a loose, fly-by-the-seat-of-your-pants, party-on kind of approach to life.

But as Hotchner explains, Papa’s philosophy of leisure was actually the opposite of spontaneous:

Ernest’s confidence in the unending order of good times was founded on a very disciplined point of view toward the hours of his days and weeks. Each day was a challenge of enjoyment, and he would plan it out as a field general plans a campaign.

Hemingway felt that “good times should be orchestrated and not left to the uncertainties of chance,” Hotchner writes, and he “planned fun as seriously as work, for he considered them of equal importance to Well-Being.”

The gusto with which Hemingway attacked his “leisure” time not only created incredible adventures for himself, but for those who enjoyed the exhilaration of being pulled into his orbit. As one friend remembered, “He generated excitement because he was so intense about everything, about writing and boxing, about good food and drink. Everything we did took on a new importance when he was with us.”

The fact that Hemingway rigorously planned out his good times, Hotchner adds, “did not mean that there was no flexibility.” A visit to Paris that was supposed to be a two-day trip, could turn into a two-month stay. But it did mean that Hemingway, whether at home or on vacation, had a detailed idea of what he wanted to do each day — the places he wanted to visit, the people he wanted to see, the activities he wanted to partake of, the restaurants and bars in which he wanted to eat and drink. As Hotchner observes, each day “was set up carefully before it dawned or, at the very latest, at its dawning.”

Hemingway wanted a life filled with excitement, drama, and real interest, and understood that those qualities wouldn’t just happen — they had to be intentionally planned for and created.

It’s a secret to good livin’ that commonly goes unrecognized. Even those who plan out their work days, don’t think of planning out their leisure time. Folks head into the weekend without any idea of what they’d like to do with it, and end up piddling around the house, surrendering to the inertia of television, and feeling restless come Monday that they let another 48 hours of potential fun slip away. Or they take trips without a real itinerary in mind, spend the days a little aimlessly, and return home feeling like they could have made more of their rare vacation time.

Plotting your “off hours” can help you make much more out of them.

It doesn’t mean scheduling out each hour of your evenings or weekends, nor carrying around a clipboard of activities on your vacation, and continually checking your watch to keep yourself moving between them. It doesn’t rule out flexibility, changing plans, and taking unforeseen detours. It doesn’t even necessarily require planning too far ahead.

Rather, it’s as simple as having an idea for an activity you want to do and a new restaurant you want to try before the weekend starts. For example, at our weekly family meeting, the McKays try to pick one microadventure to do on Friday evening or Saturday. We’ve found that without this preset plan, we tend to fritter away the weekend without doing much of anything.

Planning your leisure time is also as simple as spending 20 minutes each night you’re on vacation, looking at travel sites or books, and deciding on a few activities you’d like to do the next day. That way in the morning, you’re ready to hit the ground running.

It’s also a matter of planning those trips, period. Turning those “We ought to do that someday” thoughts into reality.

It’s worth generating a list of all the things you love and love to do, just as Hemingway once did. Then think about how to get more of them in your life more frequently. Then create a plan to make it happen.

As Hemingway said, “Never regretted anything I ever did. Only regret things I didn’t do.”