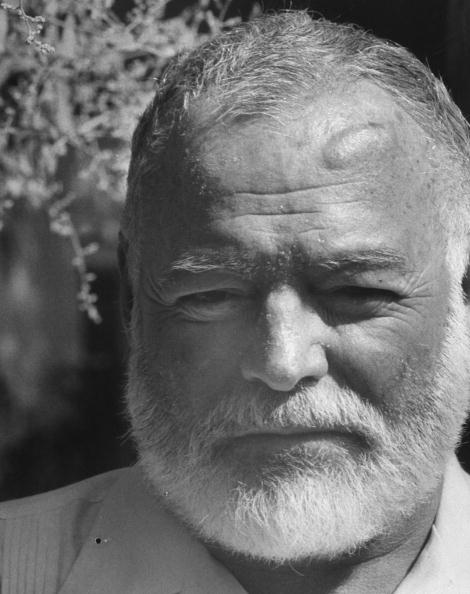 Above: Accidentally pulling a skylight onto his head in his 20s left a permanent welt that lasted for the rest of Hemingway’s life; it also gave him one of the many serious concussions he suffered over the years, which may have given him a traumatic brain injury, which may in turn partly explain some of his capricious and volatile behavior, as well as precipitated his eventual suicide.

Suicide always leaves the question of “Why?” in its wake, and this is especially true when the person who commits the act seemingly has so much to live for.

Such is the case of Ernest Hemingway. As his friend, A. E. Hotchner wondered, why would someone “whom many critics call the greatest writer of his century, a man who had a zest for life and adventure as big as his genius, a winner of the Nobel Prize and the Pulitzer Prize, a soldier of fortune with a home in Idaho’s Sawtooth Mountains, where he hunted in the winter, an apartment in New York, a specially rigged yacht to fish the Gulf Stream, an available apartment at the Ritz in Paris and the Gritti in Venice, a solid marriage . . . good friends everywhere . . . put a shotgun to his head and [kill] himself”?

While an answer to this kind of question can never be offered with any certainty, given the complexity of mental health, and the time that has passed, there are several plausible possible explanations.

What we do know is that at the end of his life, Ernest Hemingway was suffering in mind, and likely in body as well. Over the course of his life he had weathered malaria, dysentery, skin cancer, high blood pressure, and high cholesterol, and these maladies had taken their toll. Additionally, he had suffered six serious, essentially untreated concussions (two within back-to-back years), which left him with headaches, mental fogginess, ringing in his ears, and very likely a traumatic brain injury.

Several years before his suicide, he was almost killed in two separate plane crashes, in two days, which ruptured his liver, spleen, and kidneys, sprained several limbs, dislocated his shoulder, crushed vertebra, left first degrees burns over much of his body, and cracked his skull, giving him one of the aforementioned concussions (this one so severe that cerebral fluid seeped out of his ear). He was in constant pain for a long time afterwards, which he dealt with by drinking even more heavily than he usually did.

Hemingway also had untreated hemochromatosis, which creates an overload of iron in the blood, causing painful damage to joints and organs, cirrhosis of the liver, heart disease, diabetes, and depression. (Hemochromatosis runs in families, which may partly explain why suicide ran in Hemingway’s; his grandfather, father, brother, sister, and granddaughter all killed themselves.)

In addition to his physical deterioration, in the months before his death, Hemingway plunged into a state of depression, delusion, and paranoia (possibly precipitated by his TBI) the likes of which his friends and family had never before seen. He found he could no longer write, and the loss of the ability to engage in the great purpose of his life left him in tears. He was hospitalized twice for psychological treatment, but felt the electroshock treatments he was given further inhibited his writing and only made the depression worse.

While leaving for his second stay at the hospital, Hemingway said he needed to go into his house to get a few belongings. He was accompanied by a nurse, doctor, and friends, who had to monitor him constantly to keep him from harming himself. But as soon as he opened the door, he rushed over to his guns, chambered a round into a shotgun, and was only stopped from killing himself by a friend tackling and physically restraining him. Before getting on the plane to take off, he tried to walk into a spinning propeller. Once the plane was in flight, he twice attempted to jump from the aircraft.

Hemingway shot himself in the head a day and a half after returning home from the hospital.

While we’ll never be able to pinpoint exactly why he killed himself, it’s clear Hemingway suffered from physical and mental deterioration in the years and months leading up to his death, and seems to have been quite sick at the time he pulled the trigger.