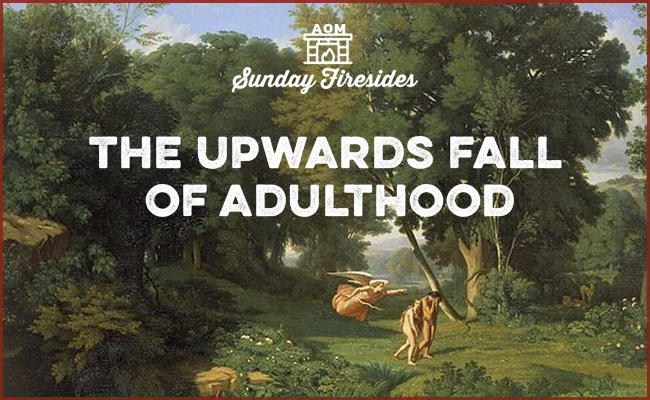 The age-old story of Adam and Eve can be read on a variety of levels.

One of the most interesting is as a metaphor for maturation.

In the beginning, the pair are innocent, like children. With minimal effort on their part, and little awareness of how it happens, all of their needs are met.

It’s girls who begin puberty first, and it’s Eve who is first drawn to the fruit from the tree of knowledge. Adam, as boys often are in early adolescence, is at first oblivious to the fruit’s enticements, and to the changing dynamics in himself, and between him and Eve. But then, he too partakes.

Their eyes are opened. Their sexuality awakened. Once lost in their own, guileless world, they become aware of their nakedness, of how they look to others, of shame.

With new difficulties and responsibilities to shoulder, a teenage Adam and Eve are expelled from their childhood idyll, and compelled to enter the lone and dreary wilderness of adulthood.

Sometimes when you’re putting your kids to bed at night, it’s hard not to envy them a little, to wish you were the one being tucked in, that you were the one with nothing to worry about the next day but how many pancakes to eat for breakfast.

At such times, it helps to remember that the way back to Eden is barred, not by cherubim and a flaming sword, but simply the linear progression of time.

It helps to recognize what you’ve gained since leaving the garden: new territory to explore, independence to find, experiences to enjoy. Having kids to tuck in. Not having to join them in going to bed at eight.

It helps to accept adulthood for what it is: Sad. Happy. Burdensome. Liberating. That most paradoxical of things: an upwards fall.