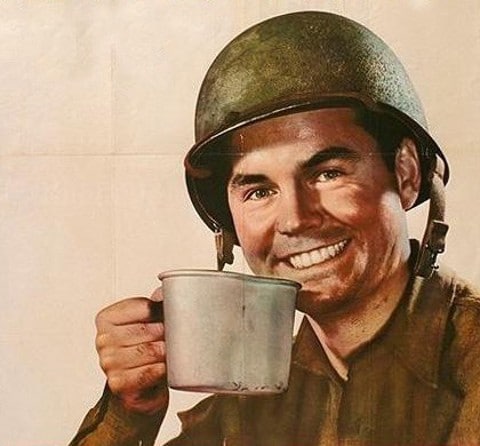 Every man should know how to brew a decent cup of coffee. It’s an everyday skill that should be passed down from father to son, like shaving or mowing the lawn. It’s a manly ritual providing both utility and comfort. Unfortunately, if you asked most men today for a cup of coffee they would either cast a worried “Help me!” glance to their wife or crank up the jet engine on their latest $300 instant coffee contraption, capable of grinding, purifying, and outputting unnatural amounts of brown acidic liquid, tasting something akin to lava, but definitely not coffee.

There was a time when I fell into the categories of men listed above, but two things happened that forever changed my relationship with coffee: 1) I joined the military and 2) I moved to the Seattle-Tacoma area.

For those unfamiliar with the military, from the darkest corner of a tent in Afghanistan to the desks of generals sitting at the Pentagon, coffee has always been a staple of military culture. It could be the long hours or un-ending stress, but anywhere you hear a drill instructor’s piercing scream or an order for an air strike to rain down hell, you can be assured that a decent cup of coffee is nearby. I was inducted into this military/coffee tradition almost as soon as I landed in basic training.

And then there’s Seattle, the coffee mecca. Birthplace of Starbucks, Seattle’s Best (technically started a few miles away in Coupeville, but close enough), and home of Tully’s. Seattle is pretty much unrivaled when it comes to their love of quality coffee. I once started to count the number of drive-thru espresso shops within a 10-mile radius of my house and quit counting after reaching over 20. The people of the Northwest love their coffee, but what’s even better is they’re thrilled to show you how to make good coffee yourself.

Now, I don’t profess to be an expert barista, but I give you the following guide to making great coffee, as one man helping another. It’s not perfect. Anyone who loves coffee knows there’s always more to learn. But through much trial and error, this process has produced consistently great coffee and brought me the enjoyment of creating something with my hands each morning. Here we go:

1) Get decent beans. It really doesn’t matter how you brew your coffee if the coffee itself sucks. Let’s be clear right off the bat. If the best part of waking up is Folgers in your cup…well…let me encourage you to expand your horizons. There’s better coffee out there. Now, I realize that taste is a very personal thing, so if you absolutely love the huge bins of dry, cheap coffee that keep you supplied for a year, please don’t let me steer you away, but…okay, please let me steer you away.

Asking one to name the best coffee beans is very similar to asking one to name the best wines. It is a highly subjective endeavor at best. However, there is one key component that separates the wheat and the chaff in terms of beans — freshness. Buying freshly roasted beans, as opposed to those packaged and stored for months at a time, is a sure way to make your coffee experience more favorable. Find a coffee shop nearby that either roasts their own beans or has them delivered daily or weekly from a roaster nearby and begin sampling. (Or, you can try roasting your own beans!)

Try lots of different roasts and ask lots of questions. Most coffee shop employees are eager to let you in on their favorite beans and brewing methods. Soon you’ll find beans that suit your tastes whether it’s dark or light, complex or simple. Just make sure to buy FRESH!

2) Grind the beans yourself. After you’ve bought some high-quality, freshly-roasted beans, the next step is to keep them fresh. One of the best ways to do this is to buy whole beans, store them in an airtight container, and grind them just before brewing. By doing so, you’ll help keep the flavors of the beans locked in until you’re ready to taste them. As Myron Joshua of ineedcoffee.com explains:

“Every time you buy fresh coffee beans and ask the checkout person at the coffee shop to grind your beans you are opening up the ‘flavor cells’ and causing your beans to begin losing their flavor rapidly. The purpose of grinding the beans is to create a larger surface area that will release the flavor and oils to the surrounding hot water. If coffee is prematurely exposed to air, it ‘breathes,’ leaving less and less flavor for the brew, when the water finally hits the bean.”

Finding a decent grinder is fairly easy; most major retail stores and coffee shops sell them. If you are more of an online shopper, here are a few to consider: here, here, and here. 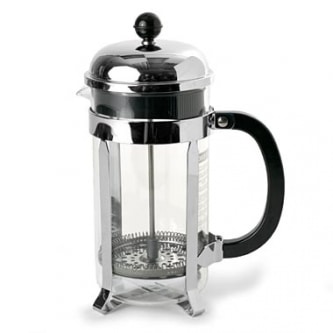 3) The French Press. Also known as a press pot, this simple coffee making device is said to have originated in France during the 1850s. The press is normally a glass cylinder with a “plunger” like device that fits tightly into the circumference of the cylinder. The plunger features a handle with some sort of wire or nylon mesh that pushes the coffee grounds to the bottom, trapping them there after a few minutes of brewing. If you’re serious about coffee, ditch your fancy automatic coffee maker and try the French press.

Why you ask, would you want to take a step backwards in history and technology when your current coffee maker can brew 53 cups of coffee in 3 minutes? Quite simply, coffee brewed in a French press tastes better for two reasons:

But, don’t take my word for it. Listen to the words of fellow Art of Manliness readers who were discussing brewing methods in the forum:

“I love to drink a strong cup of coffee. I find that the French press works best for me.” – Ryan Scott

“I’ve been around the block with a bunch of brewing methods and always have come back to French press. I like to say that for four minutes all the coffee touches all the water so you get all the flavor.” – Keith Rains

“When I’m not too lazy, I love using a French press… which is especially awesome when you’re out camping and can make that steaming brew from freshly ground beans and a pot of water boiled from off an open fire. Divine!” – Brian Heasty

The French press not only helps make a great pot of coffee, there is something very meditative in the whole brewing process. The “set it and forget it” ease of most drip coffee makers definitely has its advantages: speed, less work for the user, the ability to brew larger amounts of coffee. But while you gain efficiency, you lose a connection to the coffee.

Need even more of an AoM caffeine fix?

How to Brew Coffee With a French Press

1. Grind your beans, leaving them a bit more large and coarse than you may be used to seeing. This means a “coarse” grind if you have that option on your grinder. You will want approximately 1 tablespoon of grounds per cup. Dump them into the bottom of the French press.

2. Use a kettle to boil your water. You want to let it sit for a couple of minutes after boiling before adding it to the press. (Unless you’re at high altitude, such as in Colorado — in that case, it doesn’t need to cool.) Don’t fret too much about temperature, but most coffee geeks recommend 180-20o degrees Fahrenheit.

3. Pour the hot water into the French press, slowly covering all of the coffee grounds as you fill it up. Immediately stir the grounds to give the mixture a nice uniformity.

4. Add the filter on top and let the coffee steep for 4 minutes. After the time has passed, press the plunger down and you’re ready. A perfect cup of coffee awaits you like a loyal friend.

**Bonus Brewing Method (for those coffee enthusiasts who have read this far): The coffee siphon is an old method of coffee brewing that is now making a resurgence among diehard coffee fans. The method virtually eliminates the usual acidity found in most coffee brews and leaves an almost sweet taste that’s full of flavor. Google it or ask your local coffee expert about it, but definitely try it out. 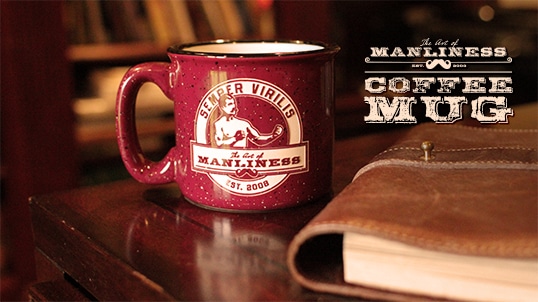 Put your perfectly brewed coffee and a perfectly manly mug. Pick an AoM coffee mug up in the store.