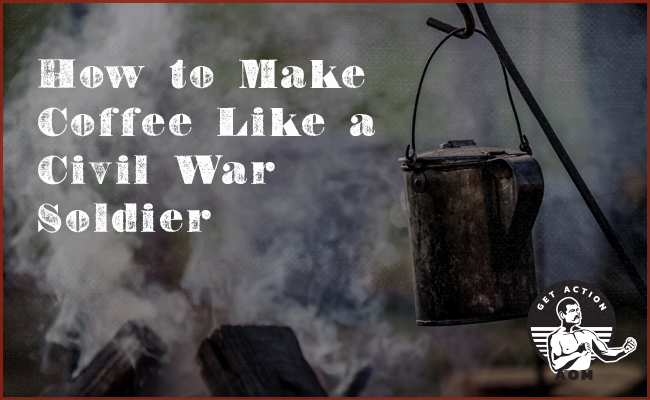 For soldiers at war, there aren’t too many creature comforts at hand. Living conditions may be Spartan, food barely edible, and daily routines either terribly boring, or thoroughly terrifying, depending on proximity to the heat of combat. That makes the morale-boosters that are available all the more appreciated, and numbered in the top tier of these is surely a hot cup of coffee.

That’s as true in the modern day as it was all the way back in the days of the Civil War, though the preparation of said joe has changed since then. Before Folgers started mass-roasting coffee in the mid-to-late 19th century, folks had to roast coffee themselves prior to consuming it. Out in the field, soldiers would receive the beans in their green, raw form, roast them over the heat of a campfire, then grind and brew right away. 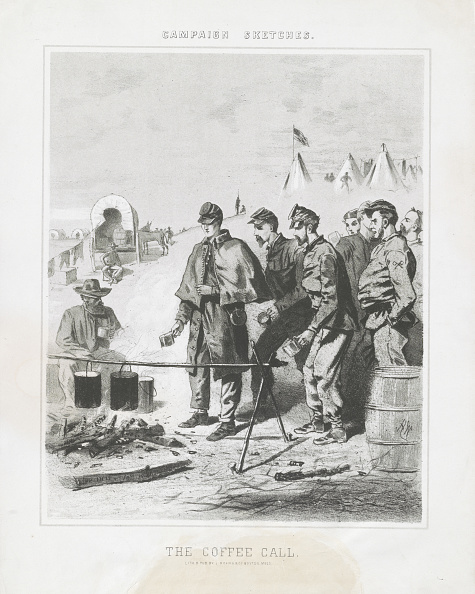 During the Civil War, Union soldiers relished “the coffee call.” Confederates appreciated hot joe as well, but because they were shorter on supplies, often had to make do with poor substitutes like chicory, dandelion root, and sweet potato “coffee.”

If you’ve ever been curious about how to make coffee the way Civil War soldiers did, below I outline the method that was commonplace then, remained so for many decades afterwards, and is still used in parts of cowboy country here in the American West when venturing far from home.

The brewing vessel used in the 19th century was most often a large tin mug/pot with a spout for easy pouring and a handle for easy grabbing/handling. The soldiers of those days were masters of improvisation, so I opted for a small pot I had on hand, which did the job masterfully. 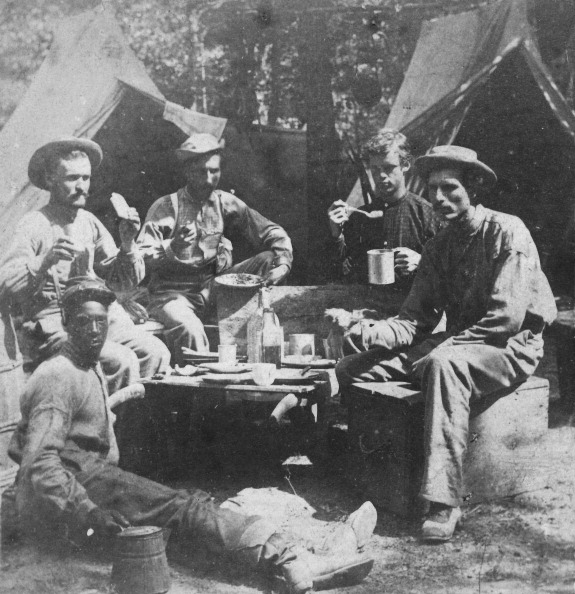 While I’m normally a guy who meticulously prepares his coffee, there’s an indescribable magical element to doing it entirely outdoors and over a fire with old-school methods that have since given way to plugged-in machines. I expected the coffee to be mediocre at best; the roasting isn’t as controlled as would be ideal (a process that looks more like this), nor is the grinding. Those two factors alone are enough to make any coffee snob, myself included, turn his nose up. But I was pleasantly surprised at how good this Civil War soldier’s coffee turned out. Now, I’m sure the spirit of the outdoor preparation contributed to that enjoyment, but it was delightful nonetheless.

Give it a shot either in your backyard or on your next camping adventure if you want to connect with the brave soldiers of yore who so reveled in their morning coffee before marching off to battle. 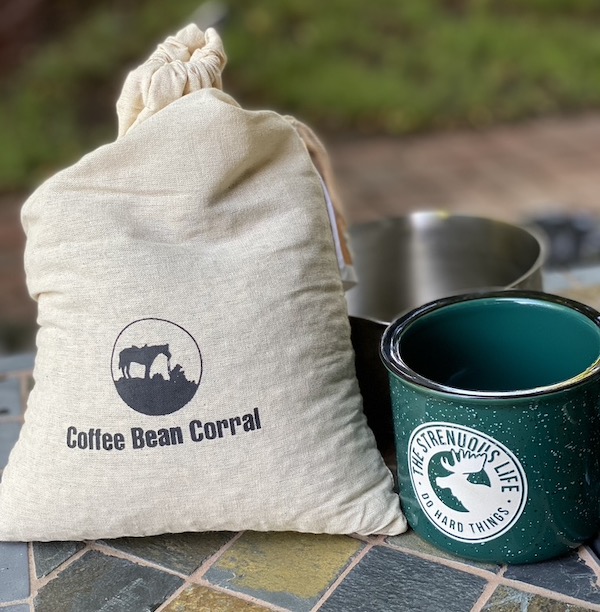 Add a handful of green coffee beans to your pot. My preferred source is CoffeeBeanCorral.com. No need to measure here — just create a nice even layer on the bottom of your pot. If you can, stir ‘em now and then with a wooden spoon or other utensil. A stick would work fine as well. If they’re not stirred, the beans might burn. 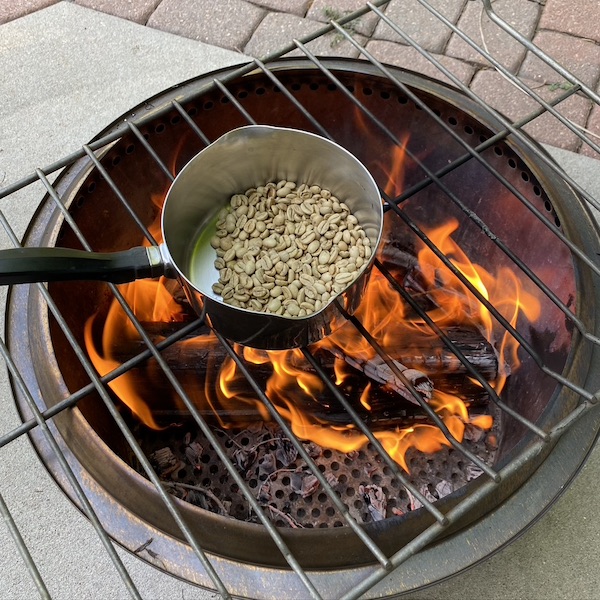 After a few minutes the beans will seem to start smoking. It’s not actually smoke, though, just steam being released from the bean. Don’t worry, you aren’t burning them. 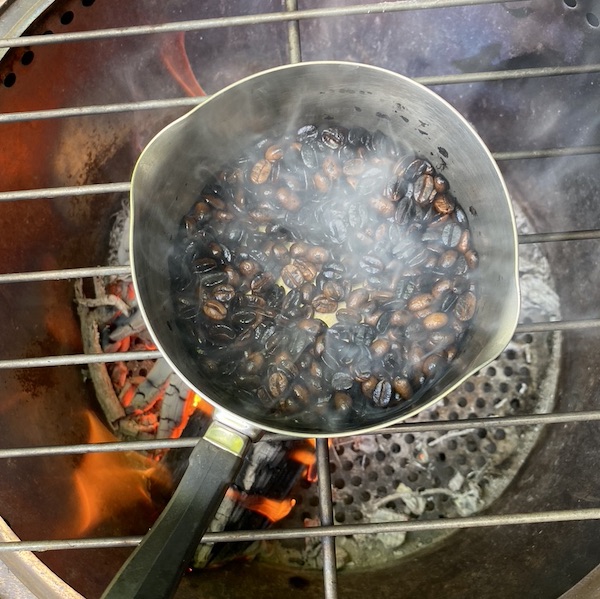 After 10-15 minutes, you’ll start to hear the beans “cracking,” much like popcorn. They’re close to done and just need a few more minutes. When you see a nice deep brown or light black (as opposed to deep black) color, you’re good to go and can remove the coffee beans from the heat.

Now, in an ideal world, you’d have a true grinder of some sort, either of the electric or manual variety. Soldiers rarely did, though in 1863 the Connecticut-based Sharps Rifle Company introduced a rifle that included a grinder right in the stock of the gun. Not many ended up in service, but it goes to show how important coffee was to the Union cause, if not in practicality, then very much in spirit. 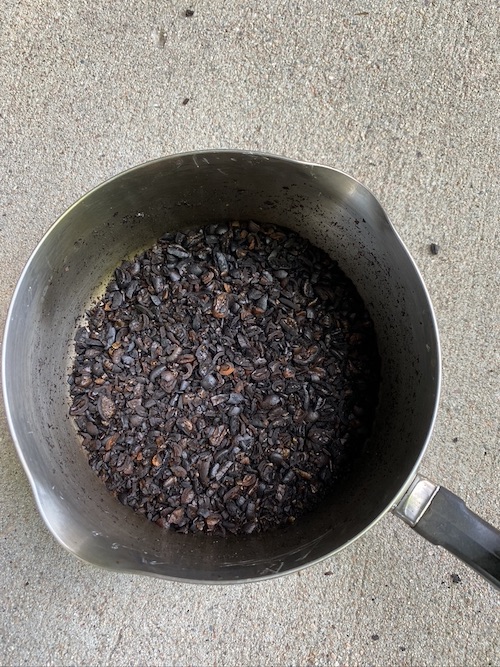 Anyways, with no real grinder to use, most soldiers resorted to rocks or the butt of their gun. I used a rock from the garden. I didn’t grind them perfectly, but given the implement and my own patience, a few minutes worth of effort was certainly good enough for the purpose of coffee in the field. 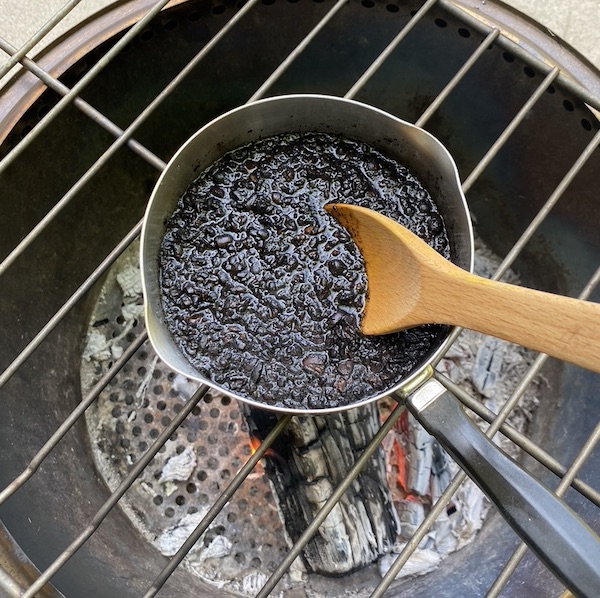 After you’ve ground the beans, add water (halfway to two-thirds full) and place the pot back onto the heat. Bring the water to a boil, remove from heat, and let the sludge steep for about five minutes.

Though filtering wasn’t always part of the coffee-making equation in the field, putting the brew through some sort of sieve or cloth improves the quality ten-fold. Nobody wants chunky coffee, soldiers included. I used a cheesecloth because I had it handy; any sort of cloth will do. 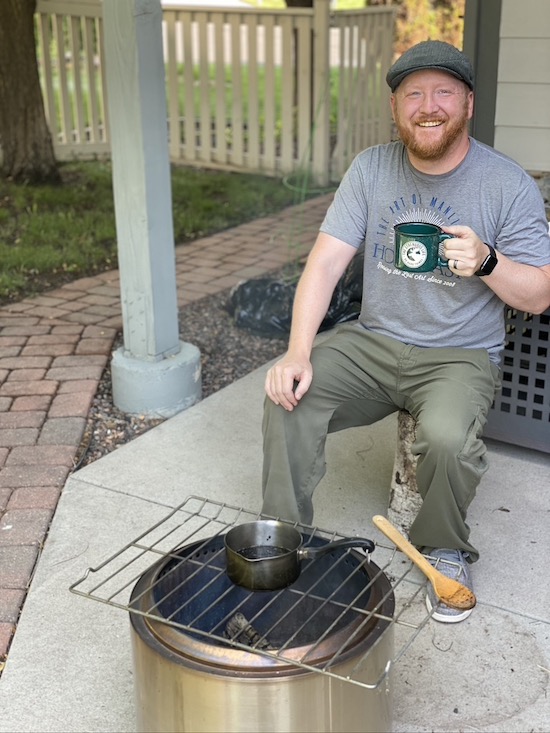 Grab a log, sit by the fire, and, if you really want to have the authentic Civil War-era experience, drink your field-expedient joe alongside a piece of hardtack. Yup, we’ve got a guide to making that, too.