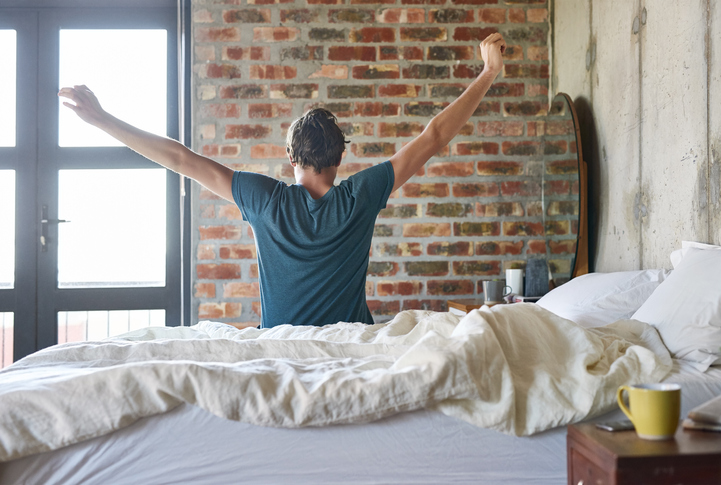 We feel there are likely habits common to high-achievers, which, if duplicated, would help us all elevate our own work. This is especially true of the choice of when to wake up each day. There seems to be special weight placed on this decision, a feeling perhaps born of the idea that how you start something determines how the rest of it will go. The time you get up each day seems to be a potentially impactful pivot point from which the quantity and quality of one’s ensuing work and decision0making will flow.

It’s popularly thought that the best time to wake up is early in the morning. “The early bird gets the worm”; “Early to bed, and early to rise, makes a man healthy, wealthy, and wise.” Beyond even the idea that rising early has a practical benefit in aiding productivity, there’s a moral connotation to this habit as well; early risers are perceived as having more discipline, while their late-rising peers are often perceived as lazy.

Is there truly a correlation between waking up early and success?

The Morning Person as Success Story: Considering the Evidence

I decided to find out by re-reading Mason Currey’s Daily Rituals: How Great Minds Make Time, Find Inspiration, and Get to Work. The book is a collection of short descriptions of the daily routines of 161 eminent authors, mathematicians, architects, and artists — folks who did creative work and were able to set their own schedules. As I read each entry, I kept a tally of when each individual woke up. I only marked down those for whom a specific time was given, skipping entries where the time was kept more vague (e.g., “early morning” or “early afternoon”). In the few cases where a person woke up not at a straight o’clock (i.e., _:00) and instead arose at _:30, or were said to arise sometime between __ and __, I “rounded” to the earlier hour in half the cases, and to the later hour in the other half. My aim was just to get a feel for the general range of times that these folks got up each day.

This gave me the wake-up times for a sample set of 68 individuals, and these have been graphed below: 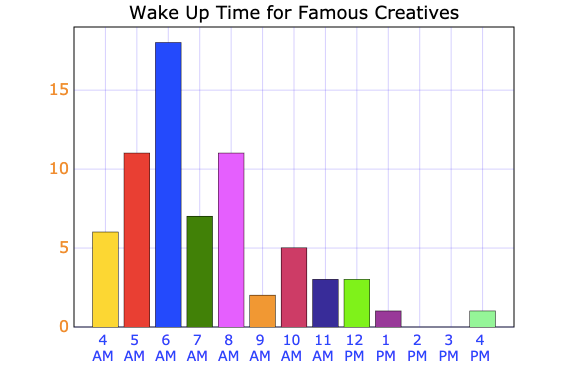 It’s worth noting that almost all those who woke up at 4 am, took a long nap either several hours after rising, or in the afternoon.

As you can see, there were indeed many early risers among this high-performing group, with the most common wake-up time being 6 am. Yet it is just as significant to observe that there were as many folks who woke up at 8 am as 5 am, and almost as many who woke up from 7 am on, as at 6 o’clock or earlier. And those in the former category were no less creative/productive/successful than the latter. Having a good morning to set the tone of your day, it seems, can happen at almost any time.

The real takeaway then, is that there isn’t in fact one “right” time to wake up if you want to be creative and successful. The answer to the question of “What time should you wake up to do your best work?” is: “Whatever time works best for you.”

The novelist Bernard Malamud came to this same conclusion:

There’s no one way—there’s too much drivel about this subject [of copying other people’s routines]. You’re who you are, not Fitzgerald or Thomas Wolfe. You write by sitting down and writing. There’s no particular time or place—you suit yourself, your nature. How one works, assuming he’s disciplined, doesn’t matter. If he or she is not disciplined, no sympathetic magic trick will help. . . . Eventually everyone learns his or her own best way. The real mystery to crack is you.

Experiment. Be self-reliant. Find your own optimal routine. It’s worth noting that not everyone Mason profiled began working right after waking up; they might arise in the morning but first attend to other important tasks and activities before beginning work in the afternoon or evening. They might get in a morning workout or spend the first few hours of the day with loved ones. There are multiple components in one’s schedule to play with.

Now, all this being said, there was one commonality between all the profiles that was so nearly universal that it should be given real credence: despite the many varied ways in which each individual arranged their daily routine, almost all of them had a routine, and stuck to it religiously.

The Importance of a Morning Routine

“My experience has been that most really serious creative people I know have very, very routine and not particularly glamorous work habits,” explained the modern composer John Adams.

“Routine is a condition of survival,” asserted the writer Flannery O’Connor.

The novelist John Updike felt that having a daily routine was so important because it “saves you from giving up.”

These sentiments were shared even among those whose overall personalities and lifestyles were fairly hedonistic; for example, though the modern artist Francis Bacon and the writer Ernest Hemingway could be called night owls and sometimes stayed up late partying (the former drank six bottles of wine a day), they would nonetheless still wake up early and get to work, hangovers and getting enough hours of sleep be damned. A productive morning and productive day were always on the docket. As Papa put it, “You have to work every day. No matter what has happened the day or night before, get up and bite the nail.”

Further, among the individuals Currey profiled, such revelry was far more the exception than the rule. Despite the reputation of creative types as living freewheeling, iconoclastic lives, the vast majority kept to routines — inside and outside of their work schedules — that were surprisingly quiet, prosaic, and closed-in. “I love the cell,” Voltaire exclaimed, and so did many of his productive peers throughout time.

The morning habits and daily rituals lives of famous authors and artists typically look something like this: wake up, drink a glass of water, eat breakfast, do a few hours of work, eat lunch, do a few more hours of work, eat dinner with spouse, take a walk (if one stand-out commonality did emerge from surveying all these routines, it’s taking a daily walk, or two; almost a third of the individuals profiled kept this habit), watch television or read a book, go to bed Entire days would pass like this. They went out surprisingly seldom, and this was not an incidental choice but an intentional one; limiting distractions expanded their creativity. Or as Gustave Flaubert put it, “Be regular and orderly in your life like a bourgeois so that you may be violent and original in your work.”

Be sure to read our article on how to create the perfect morning routine!

Do you have a morning ritual or routine? Do you find it contributes to wellness, productivity in your workday, or self-improvement?