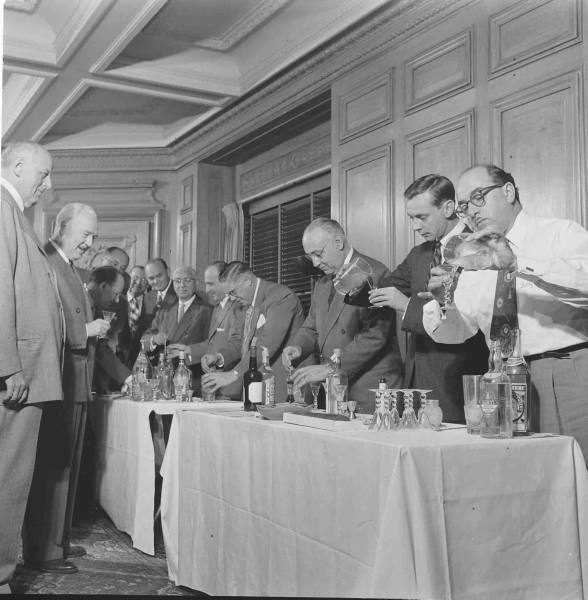 Twas a woman who drove me to drink, and I never had the courtesy to thank her for it. —W.C. Fields

It’s an argument that has plagued modern man since the dawn of time. Well, since the early fifties, at least. Just how does one make the “perfect martini?” If you ask ten different martini drinkers, my bet is you’ll get ten different answers. Most will be crap. Gentle readers, I intend to put this query to bed, once and for all. The following is the only way to make the perfect martini. Read it. Memorize it. Become one with it. For this, indeed, is the ultimate guide to the good life.

12 Steps to the Perfect Martini

2. Now, take the glass pitcher, or metal vessel, out of the freezer, where it, too, should remain.

3. Put the ice in the container (a healthy handful of cubes, at least seven to eight, in my opinion), and then pour in the vermouth. You want not only to coat the bottom of the shaker/pitcher, but the ice as well. Give it a swirl, and then out it goes, right down the drain. Now, it’s not necessary to shake it to death. A drop or two of vermouth is in proper proportion.

4. On to the gin, which should be kept in the freezer. Let’s be tasteful here, folks. The contemporary man has been trained by various restaurants and bars that a martini should be somewhere between the size of your noggin and a bowling ball. Nope, nope, nope. Two shots. That’s three ounces. No more. Could be a half oz. less, actually.

5. At this point, it depends what type of container is in use. If it’s a glass pitcher, you stir. If it’s a metal one, you swirl, in a semi-vigorous manner, but not violently. You want the ice friction to cause a chain reaction of cold, but you don’t want to bruise the gin. Gin needs to be gently introduced to the vermouth, and there MUST be some ice melt dilution. So, swirl, or stir, depending.

6. At this point, put your container down and your accoutrements away. Find some good music. In my opinion, all this ultra-lounge stuff is fine. Mancini, Julie London, Les Baxter, et. al. I listen to it, too. But, my first instinct is now, and will always be, to go for the Sinatra. Why mess around? After Sinatra, there’s Dean-o, then Sammy. After I’ve exhausted those, then, and only then, will I go for the lounge.

7. Okay, back to the drink. Swirl it some more.

8. Now put out something to nosh on. My preference is for good old fashioned cocktail peanuts, spanish-variety if you can find ’em. It was always good enough for Dad, so it’s what I go with. I think it’s passed on in the genes, actually. Other options are mixed nuts, or even blue cheese on crackers. As long as it isn’t things like goldfish crackers, chex mix, yogurt-covered anything, etc., you’ll be fine.

9. Back to the drink again. Swirl some more.

10. Grab the olives out of the fridge. Take your toothpick and push out those nasty little red pimento buggers. Mount up two olives.

12. Strain the concoction into two martini glasses (I say two because martinis need to be drunk in the presence of beautiful women. The same logic goes for the olives. You use two, as Sinatra put it, so there’s one for you, and one for the beautiful gal that’s about to walk in the door.) In go the olives. Out go the day’s troubles.

Martinis are serious drinks, for serious people. Case in point: 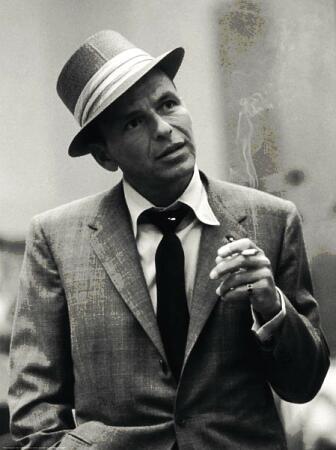 As I said before, they aren’t to be made with amaretto, or as big as a football, and they most certainly are never, never, never to be drank while wearing jeans, t-shirts, or ball caps (whether worn frontwards, sideways, or backwards. N. O. means NO!) Of course, a tux is the ultimate, but not practical for most of us. A dinner jacket is nice. Or, a “loose flowing sport shirt,” i.e. a classy, not chincy, Hawaiian shirt. Again, that’s Sinatra, this time from From Here to Eternity. But, you knew that already, right?

You have to remember, the martini is the King of the Cocktails. It’s from a different era. A martini is not something to be raced through, but to take your time with, in a relaxed state of mind. All that hooey-phalooey about vigorous shaking, and drinking it before there’s even a thought of ice dilution is for frat boys. Guys that drink their “martinis” with chocolate in ’em. Or vodka. Just look at movies like The Tender Trap. Now, while I don’t advocate using equal parts vermouth to gin, nor making them in fishbowls, as was done in said film, the point is, it’s a casual thing. Back in my Dad’s day, martinis were made in large glass pitchers, with ice, and left to sit out. Kinda like in The Seven Year Itch. I do, However, recommend taking the cubes out before drinking. Marilyn didn’t seem to mind, I must say.

Podcast #733: What a Man With 60,000 Books Can Teach You About Lifelong Learning and Building Your Home Library