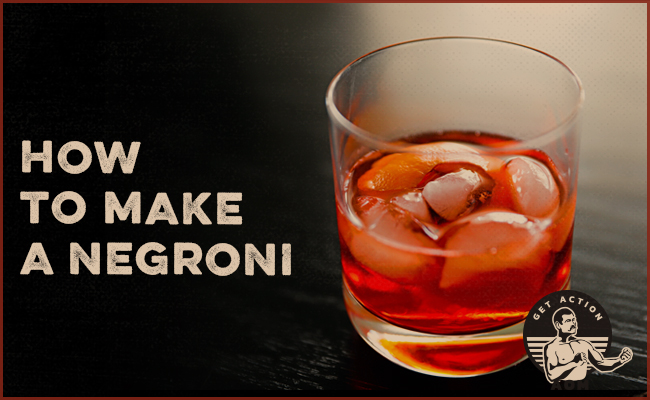 Some cocktails seem to pair particularly well with the seasons of the year. A mint julep in spring, a margarita in the summer, a hot toddy in fall. But what’s a good drink for the winter months?

While there are a number of worthy candidates, for my money, the Negroni makes the perfect wintertime cocktail.

The floral gin takes you out of the doldrums of the bone-chilling weather, the bitter Campari brings you right back into the season, and the sweet vermouth blends it all together for a drink that just doesn’t taste as good outside the span of roughly November through March.

Beyond its seasonal suitability, there are a bunch of other reasons to dig the Negroni too. I’ll first get into those, before walking you through how to make it part of your own home bartending repertoire.

3 Reasons to Give the Negroni a Try 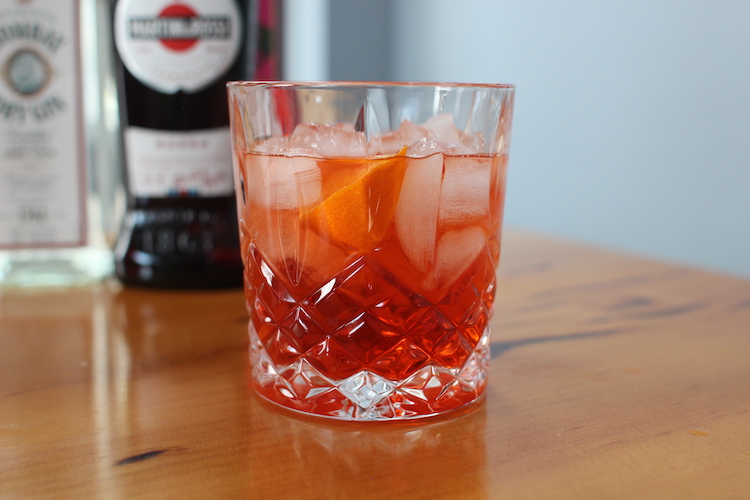 1. It’s simple. Plenty of cocktails are a pain to make because of their complex recipes; some call for a number of unique and hard-to-procure ingredients; others require head-scratching techniques (like with the delicious but not-so-easy Sazerac). When that’s the case, I’m just not real motivated to mix ‘em up.

The Negroni, however, is just three ingredients, two of which you almost assuredly have in your cabinet already. Furthermore, the Negroni is one of many cocktails that fall into the “equal parts” category — that is, the original recipe calls for you to mix its three ingredients in a straightforward, easy-to-remember 1:1:1 ratio. Couldn’t be simpler.

2. It’s versatile. While the simplicity of the basic Negroni makes it accessible, it’s also a cocktail recipe that’s easy to play with. Many modern mixologists reject the original 1:1:1 ratio, noting that the palette of 100 years ago is very different than today’s. Back then, bitter drinks — and their supposed attendant health benefits — were all the rage, and cocktails were crafted with the liqueur or mixer being the dominant taste rather than the base spirit. (The Americano was in fact a popular drink and a precursor to the Negroni; that was 1 oz Campari, 1 oz sweet vermouth, and soda water. No spirit at all!) To today’s palate, that original ratio is often a little too bitter (I’ll talk about my own ideal ratio in just a bit).

3. It looks nice. The deep red color of the Campari gives the drink a marvelous ruby red appearance, which looks especially nice in a crystal old fashioned glass with an orange slice floating on top. This cocktail oozes luxury and coziness at the same time. 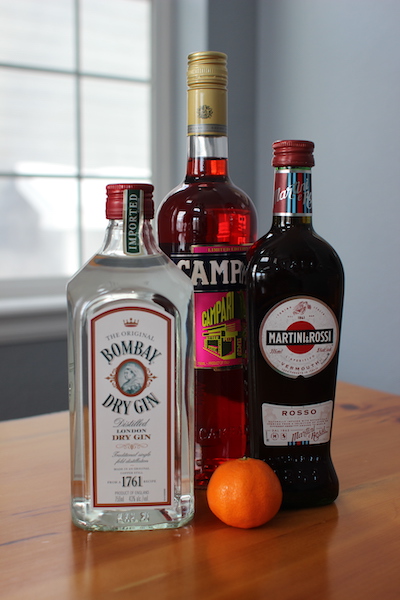 Campari. This bitter liqueur is an alcoholic infusion of fruits and herbs that’s marked by its deep ruby red color. This is a specific brand of liqueur — like St. Germain or Drambuie; that is, it’s not a category of drink that you’ll find a number of options for on liquor store shelves. There’s just one Campari and it’s not cheap (~$35 for a 750ml bottle). But, when you’re only using an ounce or less at a time, it’s a bit easier to literally and metaphorically swallow.

Since it’s in the “bitter” category, adding an ounce of Campari is basically equivalent to adding a few dashes of bitters to your cocktail. So why use this instead of just bitters? The difference, aside from sheer volume, is the unique flavor and color of Campari. If you taste bitters on their own, they’re almost unpleasantly strong. Of course they get diluted in the drink, but the flavor doesn’t come through as much as the bittering effect itself. With Campari, you really get a fruity, herbally flavor in addition to that bittering effect. Plus, it lends the drink its signature color.

Sweet Vermouth. Every home bar should be stocked with sweet vermouth. While it’s mostly known for its place in Manhattans and Negronis, there are a ton of other cocktails that use it too.

Sweet vermouth is an aromatized and fortified wine. What does that actually mean though? It’s basically a wine base, with some brandy, herbs/spices, and fruit added in. It’s an ingredient that is generally used to sweeten cocktails, almost never being served on its own. (Though you should give it a taste on its own, just so you know what it’s like; I like to do that with anything I’m putting in a cocktail, to better see how combining it with other ingredients changes the experience of its original flavor.) At 15-20% ABV — a few percentage points higher than standard wine — the addition of sweet vermouth definitely increases the booziness of the drink; just something to keep in mind when playing around with it.

This is a category of beverage, meaning you’ll have quite a few options at most liquor stores, ranging from $5-$20 for a 750ml bottle. Most bottles will fall on the lower end of that range, and in fact Cooks Illustrated rated Cinzano and Gallo brands (each under $10) as among the best.

Gin. Any gin will do, but with this drink, I tend to prefer a dry gin, as it seems to blend a little better with the strong flavors of the Campari and sweet vermouth. For drinks like this that aren’t meant to highlight the spirit itself, I enjoy Gordon’s London Dry Gin. It’s cheap and plenty tasty. If you’re doing a variation with more gin and less Campari/vermouth, you might choose a higher quality gin with more flavor and complexity of its own, though you certainly don’t have to. The Bombay Dry Gin pictured above is a classic, and just over $20, making it a perfect mid-range option.

Orange Slice. When it comes to citrus garnishes, there are as many opinions as barkeeps. Some use just a small strip of peel, which adds much more citrus aroma than it does flavor. I’m in the camp that prefers to use a whole slice of citrus, whatever that may be depending on the cocktail. In the Negroni, it’s an orange. With two small kids in the house, we almost always have those tangerine “Cuties” on hand, and a small slice of one is perfect for this drink, in my very humble opinion. It adds a little bit of flavor, obviously, and also looks nice when settled in among the ice cubes. 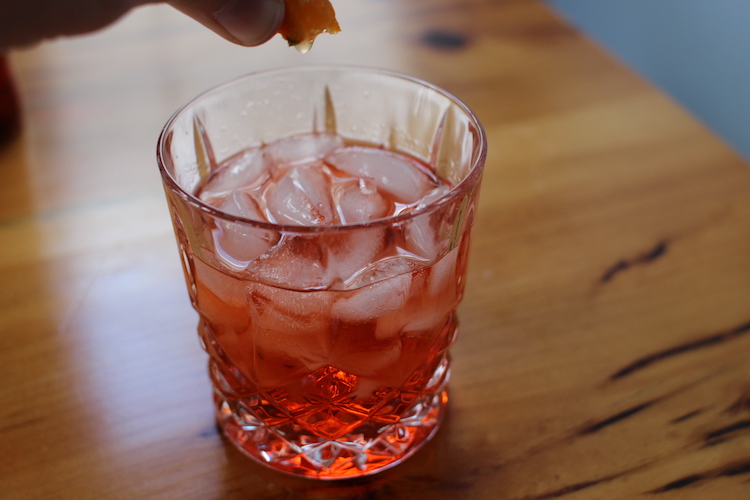 Make sure to squeeze that orange.

As mentioned above, the recipe and construction of the Negroni is about as easy as it gets. There’s hardly any explaining needed, so let’s dive right in.

Whereas some drinks beg for specific glass/ice combinations, the Negroni can be served however you want. It’s generally served with standard ice cubes in an old fashioned glass, or even a small stemless wine glass (with a color reminiscent of wine, it lends itself well to that type of vessel). As with just about any cocktail though, do what you will and experiment.

Mix all ingredients in the glass, with ice. Squeeze the orange slice over the drink, plop it in, give it one more swirl, and serve!

It bears mentioning again: those classic ratios aren’t necessarily the most common when it comes to modern service and tastes. I am of the opinion that your very first Negroni should be mixed that way so that you get a feel for the “real” recipe before experimenting, but you may find it too bitter. In that case, try dropping the Campari by half an ounce and up the gin by half an ounce. For me, that version ends up being a little too sweet, so I then drop the vermouth by a quarter or half ounce (and then I add even more gin — ha!). My preferred recipe is then:

The only way to really know what you like is to experiment with various ratios and come up with your own personalized Negroni. It’s a drink that’s well known for being made differently by every mixologist, which means there’s no reason for you not to do the same.

One last variation to mention: If you’re more of a brown spirits kind of guy, simply swap the gin for whiskey (usually bourbon — the sweetness offsets the bitter Campari) and you’ve made yourself a Boulevardier. It mostly retains that deep red color that makes it look really nice, but tastes more like the oak barrel you’re perhaps accustomed to rather than the floral essence of the gin.