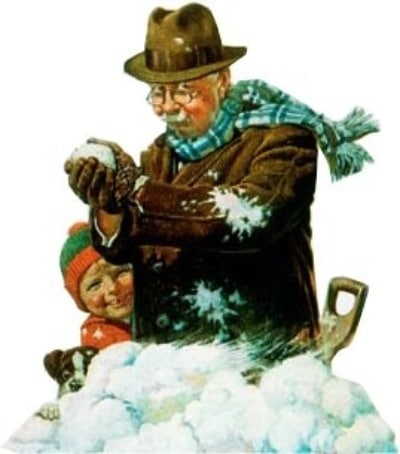 As a boy, whenever the forecast called for possible snow, I would eagerly leap out of bed in the morning and look out the window to see if any of the white, fluffy stuff-white gold really-had fallen while I slumbered. If it had, I would then dash to the television, cross my fingers, and eagerly watch the local news, anxious to see the school closing list scroll across the bottom of the screen. Seeing your school come up on that list was the equivalent of winning the kid lottery. Boo-yah! A snow day!

Snow days are one of the best parts of boyhood-not only is school canceled, but the snow-covered ground offers a range of activities that are only possible a few times a year (at least for a kid in Oklahoma). (I recently heard that a school district in Ohio is trying to do away with the snow day by holding class online in the event of a school cancellation. A travesty of the highest order! The headline of this article says it all: “Ohio School District Crushes Kids’ Dreams With Online Snow-Day Classes”).

From snowball fights to snowman building, snow provides a positively irresistible outdoor playground for the young and old alike.

With winter weather setting in, I thought we’d take the time this month to review some essential snow play skills. You can teach them to your kids to enhance their snow day experience, or use them yourself…after all, just because you’re a man, doesn’t mean you shouldn’t make time for boyish play!

First up in the snow skills series-how to make the perfect snowball.

While light, powdery snow makes great snow for skiing, it’s not conducive to snowball making. Colder temperatures create this powdery snow. Because of its low moisture content, powdery snow won’t pack. However, if you only have powder snow, there a few things you can do to make it suitable for packing snowballs.

First, look for snow in slightly warmer places such as close to the street where cars have driven or near houses where the heat given off from inside might warm things up a bit.

Second, and if you’re a masochist, pack the snowballs with your bare hands. The heat from your hands will warm up the snow and create enough moisture for it to stick together. Of course if the snowball fight lasts several hours, you might lose a few of your digits.

Third, wait until the middle of the day before you start your snowball fight. This will give the sun time to warm the snow up a bit and create the needed moisture for snowball packing.

Wear gloves, not mittens. When packing snowballs, you’ll need all the finger dexterity you can get. While mittens keep your hands nice and toasty, it’s hard to pack a snowball with a pair of flippers. It’s not impossible; it just takes more time and care. But that extra time can spell the difference between getting pegged in the face with a snowball and being able to launch a preemptive strike.

Also, the mitten’s strength in keeping your hands warm is also its weakness in making snowballs. Less heat escapes from a mitten. But you need a little heat for snowball packing, especially if you only have dry snow available. So instead of mittens, go with gloves. You’ll have the dexterity to quickly form snowballs and just enough heat to create the moisture needed for proper packing.

Packing your snowball. You’ve found the perfect snow and you have your gloves on; now it’s time to start making those snowballs. When selecting snow for your ammo, go with the snow a few inches below the surface. The top layer has already packed this snow down. Using pre-packed snow makes your job a bit easier. Fill both your cupped hands with snow. Start bringing your hands together while rotating them to pack the snow. Each time you bring your hands together, apply more and more pressure. If you start off with too much pressure, the snowball will just fall apart.

When you start feeling some resistance from the snow as you pack, the snowball is ready. Stop pressing and start smoothing the ball out so if forms a nice spherical shape. Ba-da-bing! You’ve got yourself a top notch snow grenade.

No soakers (unless you want to up the pain level) Soakers are snowballs dipped in water. The water causes the snow to melt a bit and ice up, turning a nice fluffy snowball into a cold, hard ice ball. Getting hit with a soaker feels like getting hit with a baseball. I’ve been hit many a time with these treacherous projectiles, and it hurts like hell. Never use soakers in friendly snowball fights with children and little old ladies. However, if you and your buds want to make your annual winter capture-the-flag game a bit more interesting, i.e. more painful, make it a soaker-only game. If your wife asks you why you have a bunch of welts on your body, tell her you got in a fight with a Yeti.

Make your snowballs one at a time or all at once? Strategy dictates which method you choose. If you lack cover and are being barraged with snowy projectiles, then you’ll have to make them one at a time. However, if you have sufficient cover to shield you from attack, build up an ammo pile before you launch your assault. When the enemy stoops over to make his one snowball, you can fire two or three snowballs at him. Master of the Snowball, Buddy the Elf, will show you how it’s done (of course having a rapid fire arm helps too):

Alright, now it’s your turn. Got any tips on making the perfect snowball? Share them with us in the comments!