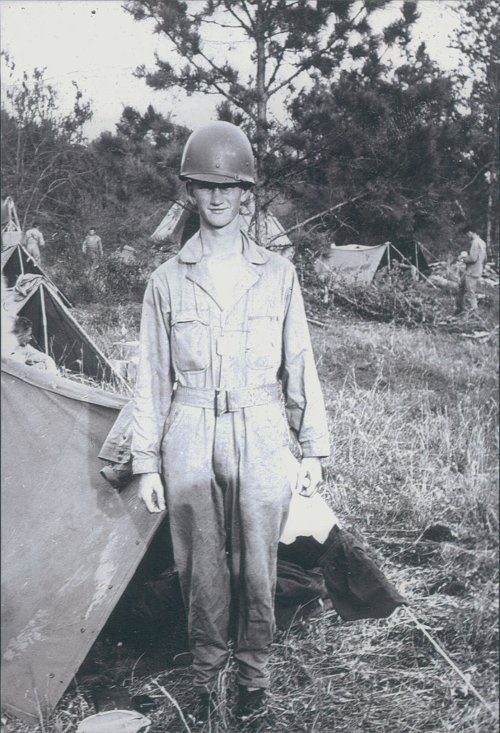 His life was simple. Robert J. Rader wasn’t a captain of industry or world leader. He loved his family. Supported his community. Served his country. Did his job. Yet when it came to his commitment to his immediate sphere of influence, Robert could not be topped.

What can we learn from such a man?

Born in 1923, Robert grew up during the depression. His father, wounded in WWI, cut stone for cemetery markers. Times were lean for a family with six kids. They lived along a road, and if someone’s rooster got hit by a car, the kids dashed to retrieve it for the dinner pot. At 16, still in school, Robert and his older brothers enlisted in the National Guard. That way they could eat while the rest of family’s food could go to the youngsters.

The Guard discovered Robert was underage and kicked him out. Fortunately, they gave him an honorable discharge, exempting him from further military service. Robert soon enlisted anyway with the 101st. Before his son went to war, Robert’s father gave him straightforward advice: “Just do your job and come home.”

Overseas battles rattled Robert. Near Carentan, his squad came across a group of Hitler’s Youth. The kids screamed, “I will die for the Fuehrer,” and opened fire on the men. The squad shot back. After the firefight, Robert stared at the dead bodies, both of the young German troops and Americans. At that moment, Robert vowed to devote the rest of his life to helping kids.

When Robert was discharged in November 1945, his body bore numerous scars. He’d been shot in the elbow and hip. Various nicks and cuts crisscrossed his body from stray shrapnel fragments. The Army offered him a Purple Heart, but he turned it down. “How could I receive it when so many others were wounded so badly?” he said. He was awarded two Bronze Stars for bravery.

Robert made good on his vow to help kids and became a school teacher and coach. He taught at the California School for Boys, then in San Miguel, then in Paso Robles. He taught in the Paso Robles School District for 25 years until he retired.

In the early days, he worked two jobs. During the week, he taught school. On weekends, he fueled planes at the Paso Robles Airport. He wanted Social Security for his family. The teaching job didn’t offer it in those days. The airport did.

People described Robert as a strict but fair teacher who didn’t stand for any nonsense. Kids other teachers couldn’t control were sent to him. He was known to get a kid’s attention by throwing an eraser against a chalkboard. Once he picked up a rowdy boy and threw him out the door. To this day, his former students say a firm hand was exactly what they needed.

For a decade, Robert was on the town’s volunteer fire department. One night a large hotel caught fire. Robert fought the fire all night, came home in the morning, took a shower, ate breakfast, and went to work at school for the day.

Robert coached basketball and cross-country. During the ten years he coached cross country, seven of his teams went to the state finals. He was proud to have two All-Americans run for him, brothers Eric and Ivan Huff.

When he retired, Robert enjoyed fishing and playing golf. He wrote many letters to his fellow Easy Company men and always signed off: Robert J. Rader, here. Be good. Be careful. Sleep warm. He loved watching sports and bought two TVs for his living room so he could watch two events at the same time.

Robert’s health slowly deteriorated. His kidneys failed, and he needed dialysis. On his final day, his wife Lucille went home from the hospital early because she was so tired. His son Donald drove her home, so it was just his daughter Robin with him in the hospital room. Robin turned on a John Wayne movie, Rio Bravo, and Robert and she talked about movie trivia. Robert asked if his wife was okay. Once reassured, he closed his eyes and slipped away.

His quiet life did not go unnoticed.

A few years after Robert died, the citizens of the town of Paso Robles, spearheaded by Frank Mecham, a former student of Robert’s and then-mayor, had a bridge renamed in Robert’s honor.

The whole town turned out for the celebration. In the crowd were former colleagues from the school district, friends from the fire department, former students, civic dignitaries, family friends, and relatives. Nine Easy Company veterans traveled in for the event. If you ever visit Paso Robles today, be sure to visit the Robert J. Rader Memorial Bridge.

Monuments aside, how would the family want Robert Rader to be remembered? He was a man who did his duty even in extreme situations, and who did it quietly with humility.

His son Donald put it succinctly: “He was an honorable man to the end.”