Editor’s note: This is a guest post from Josh Parchman.


“A long bow and a strong bow,
And let the sky grow dark.
The nock to the cord, the shaft to the ear,
And a foreign king for a mark!”

– From “The Song of the Bossonian Archers”

If you like to do things “old school,” it doesn’t get much better than traditional archery. The bow and arrow have been around for thousands upon thousands of years. This tool has served men as a way of providing food, protection, and recreation since its creation. Genghis Kahn, Robin Hood, and Art Young are just a sample of the great names associated with the “stick and string.” Since these legends have passed on to the happy hunting grounds there have been many advances in the field of archery: compound bows, sights, rangefinders, etc. These may be more “efficient” ways of using the bow and arrow, but not everyone agrees they are better. Be it while at the 3D target range or stalking the woods for game, many prefer archery in its more traditional form. For many, the appeal of bowhunting “the hard way,” as their ancestors did, is simply too much to resist.

If you’ve ever felt drawn to embrace your inner Hawkeye, here are a few basics on traditional archery.

Tools of the Trade 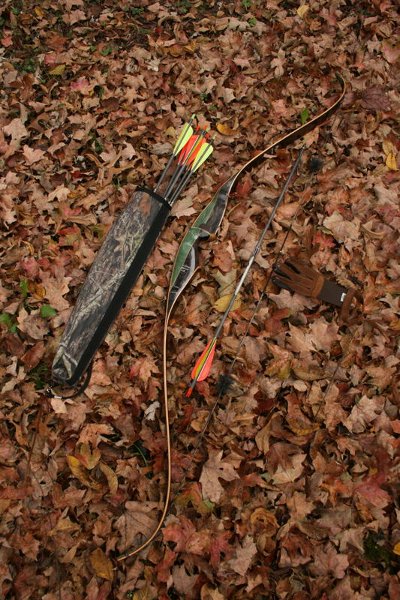 1) The Bow – There are two main types of  bows in traditional archery: the longbow and the recurve bow. Both have variations among themselves, but the basics are pretty standard. The longbow is a straighter bow with one curve from end to end, looking like a “D” when strung. The recurve bow has more than one curve, as the name suggests, and this causes added spring-like quality in the bow when it is pulled back, giving additional power to the bow.

2) The Arrow – This is the most important piece of the setup. If you do not have a proper arrow, it matters little what bow it is shot from. If it is not capable of correct flight, the archer will never hit the bull’s eye or the vitals of his prey. The arrow consists of a straight shaft of wood (many archers today use carbon or aluminum shafts for cost and consistency considerations), a nock that allows the arrow to rest on the string of the bow, fletching to stabilize the flight of the arrow (most commonly primary wing feathers, usually from a turkey) and, foremost, the attached broached, blunt or target tip, depending on the intended use of the arrow.

3) The Quiver – Holding extra arrows is the primary function of the quiver. However, if sharp hunting broadheads are being used, the quiver will also function as a guard against the archer injuring himself on an arrow not in use. Quivers come in the form of back quivers worn much like a single-strap backpack, side quivers that hang at the archer’s side, and bow quivers that attach to the bow itself, as well as several other formats.

3) The Armguard – Armguards protect the forearm of the archer from the string of the bow as it is released. Not all archers find this necessary, but may still use them for the purpose of restricting the clothing of the forearm from coming into contact with the string and throwing off the shot of the arrow.

4) The Shooting Glove or Tab – In traditional archery a mechanical release is not used. Instead, to relieve the pressure of the string on the archer’s fingers he will use a shooting glove or a tab. These also help in releasing the string smoothly so as to make the most accurate release of the arrow.

Those are the basic and most common components in traditional archery. There are many variations of each and they come in all levels of quality from basic, functioning items to works of art which leather and wood craftsmen have invested many hours into creating. 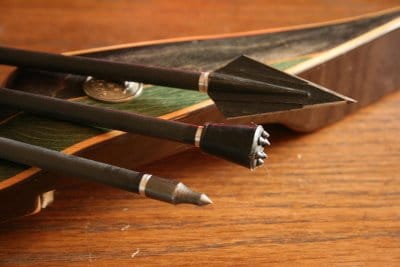 Traditional vs. Modern: Understanding the Differences

Shooting traditional archery is not better or worse than modern compound shooting, it’s just different. There is nothing wrong with cams, releases, stabilizers, etc. Instead of using those aids in shooting, however, traditional archers prefer to shoot instinctively. The difference is this: When an archer shoots with modern bows he will most always be using sights. He must either have an incredible ability to judge distances accurately or use an electronic range-finder. This is because the sight pins on his modern bow represent different distances in yardage and the proper pin must be aligned with the target to be accurate, and the bow must be held at an angle perpendicular with the ground.

The traditional archer, on the other hand, shoots instinctively; the bow can be held at any angle (called canting), and his brain makes the calculations as to what angle to hold the bow in order for his arrow to reach its mark. This sounds more complicated than it is. The process is much akin to a quarterback throwing a football to a receiver; he doesn’t need to know the exact distance (though in football we know the yardage is in fact there for him to see) because his brain calculates how hard he must throw the ball at a particular angle to get it to his teammate.

Also, compound bows provide what is known as let-off. Once the bow has been drawn it requires very little effort to keep it at “full draw.” Traditional archery bows do not have let-off. The amount of pressure on the string needed to draw it back is the same needed to keep it at full draw. No prolonged period of holding at full draw for the traditional archer. For many this is a much more rewarding method.

If an archer is not a hunter, but shoots solely for competition and recreation, there is plenty for him to participate in. There are many traditional archery clubs across the world that have regular competitions and events to get involved with, and contact information for these clubs can be found in the links provided below.

If an archer is a hunter he also has the opportunity to test his woodsmanship to the extreme. It’s comparatively easy to shoot an animal from tens, if not hundreds, of yards with a scoped rifle, or shoot a blast of “boom-stick” at your target than it is to step into the home of the wild creatures, get within a handful of yards without being detected by them, and release an arrow that will put them down in an ethical and efficient manner. Again, there’s nothing wrong (or inherently easy) with hunting with firearms, it is just different.

“Archery enshrines the principles of human relationships. The Archer perfects his form within himself. If his form is perfect, yet when he releases he misses, there is no point in resenting those who have done better than him. The fault lies nowhere but within himself.” –Confucius

For many, this centuries old activity is a form of therapy. Concentrating on their form, method of release, and accuracy demands a great deal of attention and concentration. If they can clear their mind in this practice, they can begin again on the more “stressful” things in life with a clean slate.

The community that exists for traditional archery is astoundingly extensive. There are literally tens of thousands of traditional archers around the world. Many of them gather at pow-wows, rendezvous and club events throughout the year. Any type of folk you can imagine can be found at these gatherings. A budding archer may find himself in the company of the many older men that will share their knowledge and experience with him. Because of the nature of traditional archery many archers are enriched with the wisdom of primitive skills and a plethora of outdoor treats. One never knows what he will learn from a generous soul.

If a man is interested in getting involved with traditional archery he should check out the following websites (amongst a plethora of others, these are the authors particular favorites):

A great publication full of shooting techniques, hunting adventures from around the world, insight from some of the greatest traditional archers, and general archery goodness.

This site is a great resource for anything and everything a beginning archer will need to get his new hobby started. Even the experienced will find it a valuable resource. If you want to get your hands on a bow, check out 3Rivers.

Shop of renowned archery legend Ron LaClair. If the videos of this man’s talent don’t inspire you, you can go home.