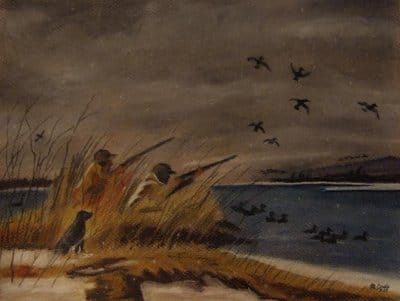 One pearly day in early May I walked upon the sand
And saw, say half a mile away, a man with gun in hand.
A dog was cowering to his will as slow he sought to creep
Upon a dozen ducks so still they seemed to be asleep.

When like a streak the dog dashed out, the ducks flashed up in flight.
The fellow gave a savage shout and cursed with all his might.
Then as I stood somewhat amazed and gazed with eyes agog,
With bitter rage his gun he raised and blazed and shot the dog.

You know how dogs can yelp with pain; its blood soaked in the sand,
And yet it crawled to him again, and tried to lick his hand.
“Forgive me Lord for what I’ve done,” it seemed as if it said,
But once again he raised his gun — this time he shot it dead.

What could I do? What could I say? ‘Twas such a lonely place.
Tongue-tied I watched him stride away, I never saw his face.
I should have bawled the bastard out, a yellow dog he slew.
But worse, he proved beyond a doubt that – I was yellow too.