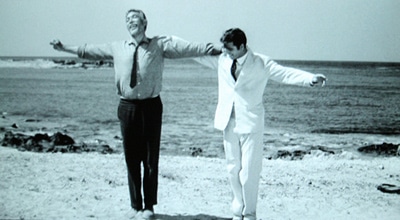 We talk a lot about gentlemanly behavior and comportment on The Art of Manliness. I think it’s a trait we can all use more of and our culture finds in short supply. Acting like gentlemen builds our self-respect, makes our interactions with others more pleasant, and brings civility back to society.

But I don’t think we should pursue manners and self-discipline to the detriment of our Wild Man. The idea of the Wild Man was popularized in recent times by Robert Bly’s book about men entitled Iron John. In the book, Bly analyzes the Grimm fairy tale of Iron John and how it relates to a man’s mental and emotional development. To Bly, Iron John is the archetypal Wild Man. He’s covered in hair, he’s big, and he’s earthy. Iron John lives in the forest where it’s dangerous and mysterious. He scares civilized society because he doesn’t always follow the rules.

In Iron John, the Wild Man takes a young boy out into the woods away from his parents and in the process teaches the boy about being a man. According to Bly, we all need to take that trip out into the wild and learn from the Wild Man in order to grow into a complete and mature masculinity. We need to be gentlemen and civilized, yes. But for a man to be truly happy and live a full life, he cannot neglect his Wild Man.

Zorba the Greek Dances His Heart Out

A film that perfectly captures man’s need to get in touch with his Wild Man is Zorba the Greek. Zorba is a man who lives life fully. He’s earthy. He’s filled with with that life giving Zeus Energy that Bly talks about. He’s the Wild Man.

Basil, on the other hand, is the complete opposite. He’s a buttoned-down British gentleman who always says and does what’s proper and what’s expected of him. He’s lifeless, boring, and predictable.

There’s this awesome scene in the film where the difference between Basil and Zorba is highlighted perfectly. Watch:

Zorba dances like a mad man and Basil watches in awe. I love the look that Zorba gets on his face when he hears the music start to play. It’s a look that says, “I’m about to get wild. Join me or get out of the way!” But Zorba’s masculine energy and thumos makes Basil uncomfortable, so he stops Zorba.

If you think about it, that’s how we often treat manliness in our modern world. We’re afraid of manliness, and we try to tame it. We want to throw the Wild Man in a cage. Just look at the way we treat boys in our public schools. Boys by nature love rough and tumble play and are full of energy. They wrestle with each other on the carpet during reading time. They shout out answers without raising their hands. They get restless during grammar lessons, but light up with excitement when they get their hands dirty with a science experiment.

But what do we tell these boys? Behave! Sit still! Quiet down! We basically ask boys to act like girls. If asking and shaming doesn’t work, we tame the Wild Boy with pharmaceuticals.

I’ve seen this in my own life. I remember as a boy my friends and I would build giant dirt ramps in the fields behind our houses. I’d race my bike with wild abandon towards the incline and then propel myself into the air. For a brief moment I took flight, and I relished the feeling of absolute freedom. Yeah, I got hurt. But that was part of the excitement- the risk of serious physical harm. My friends and I were mad for adventure, and we looked for it every day.

Fast forward to today, and that Wild Man I once had has been tamed. After years of being told to “behave” and do what’s safe, I’ve become hyper risk-averse. Law school only made my aversion to risk even worse. As a lawyer, you’re trained to see and avoid problems so you don’t end up in court. I know I’ve annoyed Kate more than once by endlessly detailing everything that could possibly go wrong when we’re trying to make a decision.

But back to Zorba and Basil.

At the end of the film, Zorba the Greek and Basil sit together on a beach after witnessing the destruction of a giant zip line contraption that Zorba created to ferry wood down from a mountain. They share some wine and lamb and while they eat Zorba imparts some advice to his dull friend:

The scene really resonates with me because I know exactly where Basil is coming from. I think a lot of us do. We’ve spent our whole lives “behaving” and trying to please those around us. We go to college because that’s what we’re “supposed” to do. We work in careers that give us prestige, but don’t excite us at all. We play it safe and hope we can just get by in life. In the process, we’ve tamed the Wild Man within us and lost our passion for life.

Zorba is right. If a man wants to be truly free and truly alive, he has to have a bit of madness. You have to, as Robert Bly would say, be in touch with your Wild Man. Just look at how happy the two men are as they dance like Wild Men. When was the last time you were that full of joy? In our modern vernacular, “madness” has a negative connotation. We think lunatics and straight jackets when we hear the word. But that has not always been the way madness was viewed. The Ancient Greeks acknowledged the kind of madness that made a man insensible, but also believed in an entirely positive type of  madness. For them, positive madness was a gift from the gods, powerful divine inspiration that superseded reason. The Ancient Greeks believed four kinds of divine madness existed: 1) madness of prophecy, 2) madness of love, 3) madness of poetry, and 4) madness of ritual. In the Phaedrus, Plato said that these forms of madness were “the source of the chiefest blessings granted to men” and that the “greatest of good things come to us through madness.”

Madness inspires men to create beautiful pieces of art and to love passionately and deeply. Madness imparts flashes of wisdom and insight and spurs men to attempt amazing and inspiring feats that a more reasonable and “sane” man would never venture to try.

When I think of some of the great men from history that I admire, many of them have this madness that Zorba talks about. When the world told them to “behave” or do the “reasonable thing,” they told the world to go to hell and they danced like Zorba right in the world’s face.

Some of you might be reading this and thinking “I’m Basil! I’m the boring stiff who’s lost all passion for life. I’ve tamed my Wild Man. How can I be more like Zorba?” I’ll readily admit I’m still in the process of getting back in touch with my Wild Man, but here are a few things I’ve learned that might help some of you.

Ask for help. In Iron John, the young boy learned about his wild side directly from the Wild Man. Basil learned how to dance from the Wild Man, Zorba the Greek. I’m sure we all know men in our lives that are full of Zeus Energy. They’re like Zorba the Greek.  Seek these men out and ask if you can just hang out with them every now and then. You don’t have to ask your Wild Man mentor questions about what it means to be a man. Just talk and do stuff with him. The thing about Wild Man energy is that it’s life giving and contagious. It rubs off on people and inspires fierceness in other men.

Do one uncomfortable thing every day. One thing that’s helped me to get in touch with my Wild Man is to get out of my comfort zone as much as possible. Do something you’ve been wanting to do for awhile now, but have been putting off because it made you uncomfortable. Ask your boss for a raise. Ask that attractive woman you’ve been saying “hi” to for the past few months on a date. Talk to a stranger. Yeah, they’re not very dangerous, but all these activities involve some risk. You could be rejected and you might have your ego bruised. The Tame Man wouldn’t even bother to try because he can’t face that sort of discomfort. The Wild Man lives for the uncertainty and doesn’t take it personally if someone tells him to take a hike.

Do dangerous stuff. Alright. You’ve made some baby steps by doing stuff that would normally make you uncomfortable. Now it’s time to kick it up a notch. Go out and do something dangerous. Now, let me be clear. I’m not saying to be stupid. If you’ve never skydived before, I don’t recommend base-jumping from the Grand Canyon right off the bat. But find an activity that you’ve avoided because you were told all your life that it wasn’t safe. Shoot a gun. Go white water rafting. Hitchhike. Play rugby. Ride a motorcycle. Just do something dangerous and watch how the Wild Man responds to it. He’ll love it.

Push yourself physically. I love what AoM contributor, Chris Hutcheson said about getting in touch with your Wild Man.

“I think using your body to full capacity goes a long way towards getting in touch with your wild man. For example, I get the wild man feeling right about the same time I feel like I’m going to puke when I’m on a long hike up a mountain, or in the final minutes of a tied up rugby match when I have to run and hit even harder than I have been the entire match just to seal the deal. Something about knowing that I’m pushing the limit physically is what does it for me.”

Dance like a Zorba. Have you ever been to a concert or a wedding and noticed how most of the men behave? They usually have their arms folded as they self-consciously tap their foot to the beat of the music. But we modern men in the West have forgotten the power of dance. We think it’s below us, that it’s just not cool or manly. Zorba the Greek would object.

There’s always that One Guy at the party or concert who understands this and just gets into it. He’s jumping around and gyrating to the rhythm of the music, and he doesn’t care what the hell other people think. He’s Zorba.

There’s something primal and wild about dancing. Every primitive tribe had a dance that only the men participated in. It was a way for men to tell stories, worship, prepare for battle and express their emotions fully.

This week, I want you to try to do your best Wild Man, Zorba dance. You can even do it in a place where no one will see you. Put on a favorite song and just dance your heart out for that one song. Your mind will tell you to stop, that you’re crazy.  But don’t listen. That’s just the wussy Basil-side of you telling you to be sane. To keep the Wild Man in his cage.

But if you want to be free, you have to be a little mad. Dance on, brother. Dance on.