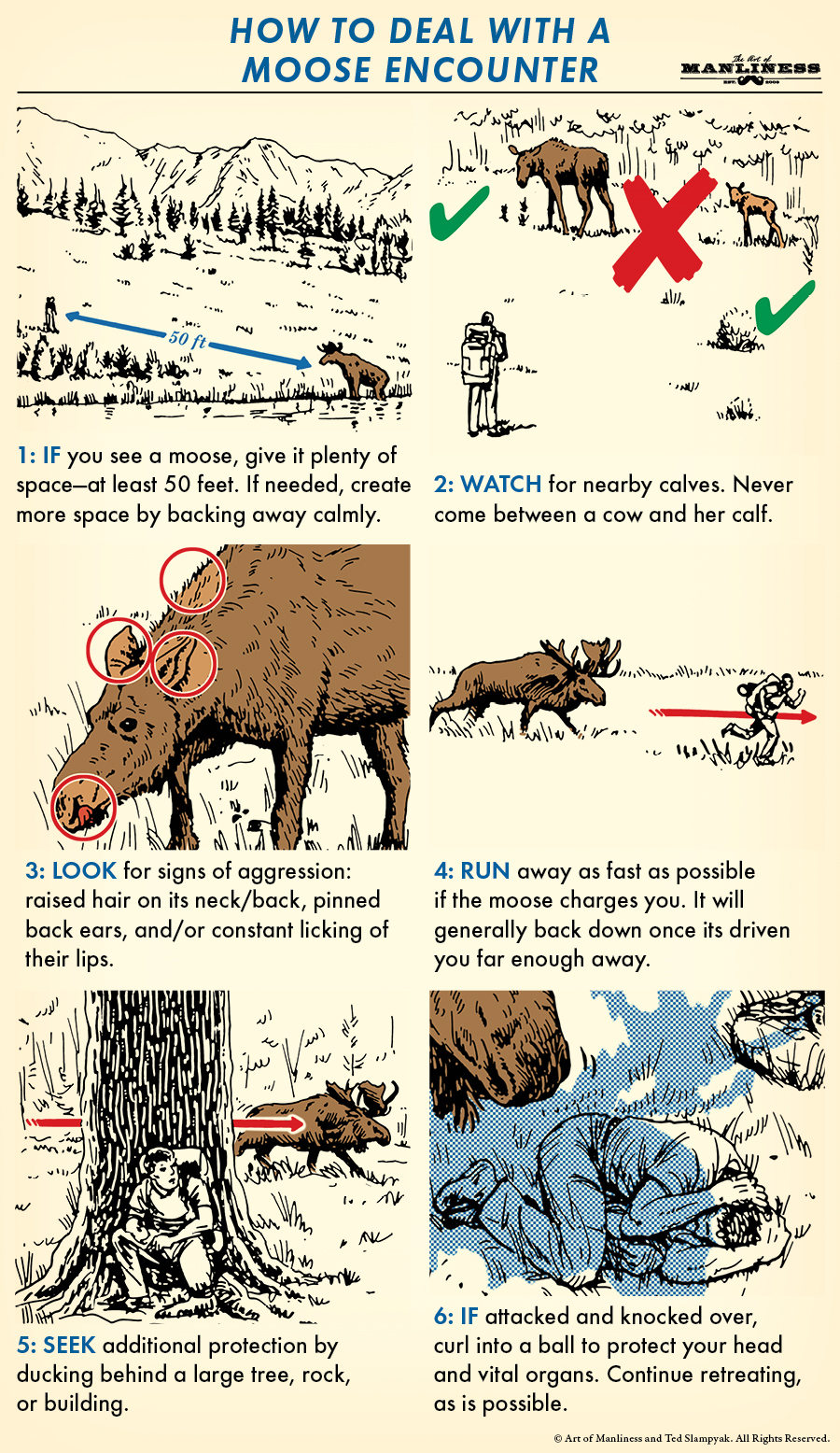 It’s easy to let worries about encountering big animals in the wild center on creatures like bears, mountain lions, and wolves. But, a bad meeting with a moose can have dire consequences, and is in fact more likely than an attack from any other animal — in the Americas, injuries by moose outnumber every other wild animal, beating out bear and wolf attacks combined. (That said, animal attacks in general are exceedingly rare. That’s why they make the news; they just don’t happen very often.)

It may be the case that moose attacks are disproportionally high because people aren’t as scared to get close to them, as they are to, say, a grizzly. They figure moose are relatively “tame,” like deer. But this is a mistaken assumption.

Seven feet tall, nearly 1,200 pounds, and capable of running over 30 miles an hour and kicking in all directions (including sideways!), an adult moose is nothing to mess with. Unlike deer or elk, moose are also less likely to steer clear of humans. Don’t expect to scare away a moose the same way you might startle a deer on the trail.

While these herbivores aren’t typically aggressive, there are certain seasonal factors that can make them more sensitive to provocation. In late spring and early summer, cows (adult female moose) are more aggressive around their newborn calves. In fall, breeding males are more likely to be on edge as they compete with other bulls. And in winter, when moose are more likely to become tired from wading through deep snow without much food, they’re more likely to be a tad grumpy. All this is to say, moose have the capacity to be aggressive at pretty much any time of year, and their behavior can be unpredictable.

Your best bet is to know how to avoid triggering an attack. When you come across a moose, do whatever you can to stay out of its way. If something you’re doing is causing it to change its behavior, revise what you’re doing — if it starts walking towards you, it’s not trying to be friendly, but likely warning you off. And if you’re hiking with dogs, make sure to keep them leashed and as quiet as possible. Moose may confuse them for a predator, like a wolf, and decide to attack.

1: If you see a moose, give it plenty of space-at least 50 feet. If needed, create more space by backing away calmly.

2: Watch for nearby calves. Never come between a cow and her calf.

3: Look for signs of aggression: raised hair on its neck/back, pinned back ears, and/or constant licking of their lips.

4: Run away as fast as possible if the moose charges you. It will generally back down once its driven you far enough away.

5: Seek additional protection by ducking behind a large tree, rock, or building.

6: If attacked and knocked over curl into a ball to protect your head and vital organs. Continue retreating, as is possible.