Welcome back to our series on the libraries of great men.

When you picture Bruce Lee, what do you see? Probably an explosive series of kicks, punches, and kung-fu moves that could take out an entire gang of bad guys.

What you likely don’t picture is a man quietly reading a philosophy book while a household is in chaos around him — kids yelling and playing, doors slamming, adults conversing. And yet that version of Bruce Lee is just as true as the dynamic, high-energy version. Lee was in fact a bibliophile, ultimately collecting a library of over 2,500 titles. This included books in obvious categories like martial arts, boxing, and fencing, but also not-so-obvious genres like philosophy (both Eastern and Western), psychology, and classic American self-help.

Let’s take a look at the reading life of Bruce Lee, followed by some titles he’s known to have read, enjoyed, and learned from.

The Reading Life of Bruce Lee 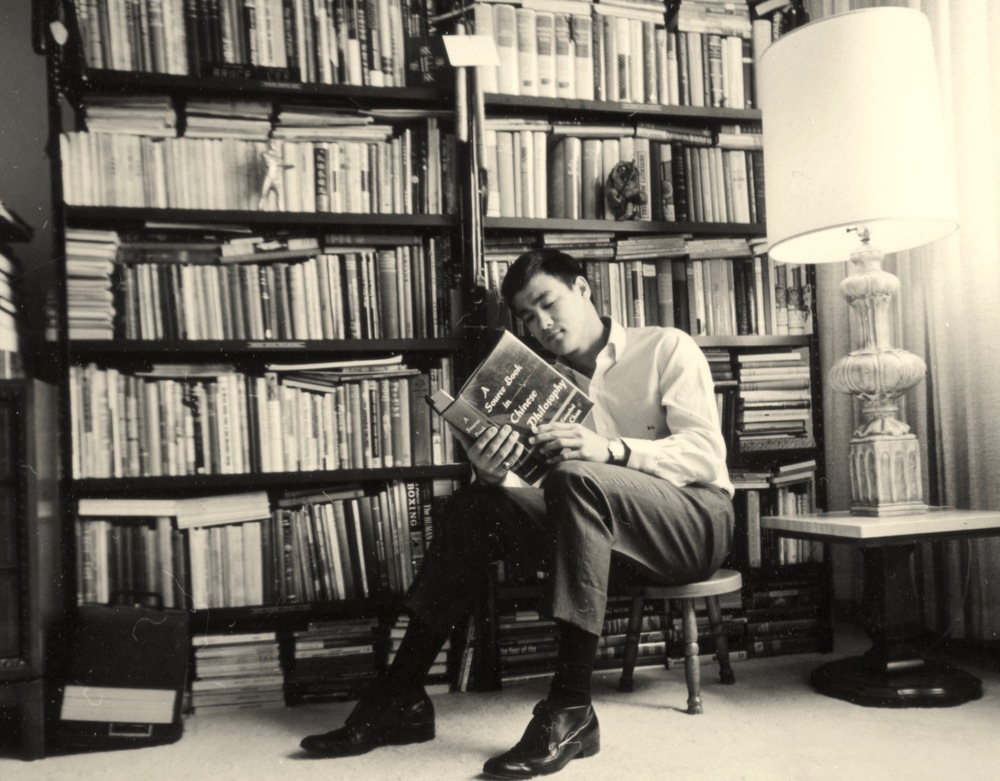 From nearly the moment of his birth in 1940, Bruce was a fury of energy. As a youngster, he earned a nickname which translates to “never sits still.” And yet there was one thing that could calm him down and hold his attention for hours on end: comic books (especially of the kung-fu variety). From there, he graduated into reading Chinese wuxia — what biographer Matthew Polly calls “sword-and-sorcery martial arts novels.”

His spare time was consumed with reading and frequenting bookstores — before kung fu took hold of his life, he even dreamed of owning a used bookstore himself. Even though he had a great relationship with books, he was a pretty terrible student at school. Polly notes he was “a particularly poor student, one of the worst in his class,” even getting expelled once. Like many notable men throughout history, an aptitude for reading did not mean an excellence or even an interest in compulsory schooling.

It was during college — as is the case for many of us — that Lee’s mind was opened up to new ideas and subjects. Even though he didn’t graduate, Lee took classes in philosophy and psychology that particularly piqued his interests (neither of those were his major — which was drama — but he interestingly later claimed that he studied philosophy in school). He would not only read, but copiously take notes, add neat underlining (sometimes even using a ruler) and marginalia, and transcribe his favorite passages into notebooks. He was not a mere consumer of texts, but actively engaged and wrestled with new ideas, letting the Great Conversation shape his own philosophy and thinking.

After college, reading became part of his regular daily routine. He never held a true 9-5 job, so his days were pretty free to be whatever he made them. In the mornings, he’d work out, running and doing a certain number of kicks, jabs, punches, etc. The afternoons were reserved for either reading or making social calls. And in the evening, he’d spend time with his family, lift weights a few times a week, or continue his reading. He cultivated both mind and body, every single day.

While he read broadly his whole life, there were periods of time where he dove deeply into a single topic, looking to achieve mastery, gain inspiration, and come up with new ideas. When developing his signature kung fu style — called jeet kune do — he devoured not only martial arts titles, but also hoards of fencing and boxing theory, combining ideas from multiple disciplines. Like all innovations, his kung fu was not born spontaneously from his head, but through an amalgamation of ideas from the course of physical exercise and self-defense history.

Another time he did a deep dive was after he had been rebuffed by Steve McQueen on a kung fu movie project. Lee had an idea for a plot, but McQueen couldn’t commit to starring because he didn’t want anyone riding on his coattails (a classic move from the famously vain and self-centered actor). Lee was furious, and became determined to make his own destiny rather than rely on others to help him out. To that end, he delved into the classics of self-help, putting into practice Napoleon Hill’s advice to write down a specific goal and recite it out loud day and night. From then on, he would seek to make his own projects come to fruition and be in full control of their development.

Yet another instance of this is when he was laid up in bed due to a back injury sustained during one of his morning workouts. Given Lee’s famous energy, he was of course miserable being stuck in bed. He needed something to at least keep his inner self active, so he read the entire works of Indian mystic and philosopher Jiddu Krishnamurti, which at the time was probably 30+ books.

In addition to books, Lee subscribed to the major fitness magazines of the day, becoming an innovator in that arena as well and working weightlifting into his regimen in a time where that was actually considered an unsafe and counterproductive practice.

If you have any doubt about the influence of books and reading on Bruce’s life, look no further than his headstone in Seattle, part of which is an open book carved from marble. As his wife Linda said, “Bruce carried a book with him wherever he went.” While he’ll always be rightly known mostly for his martial arts innovations and movie/TV projects, his reading was the foundation that shaped his remarkable life and kept him grounded and true to his deepest values.

Let’s now take a look at some of the titles and authors that influenced Bruce.

While Bruce’s library contained thousands of volumes, they were primarily centered in a handful of genres: philosophy (the vast majority), martial arts (and other fighting disciplines), and self-help. Below is but a sampling of Bruce’s favorite authors and most interesting titles.

The Bruce Lee Podcast co-hosted by his daughter Shannon