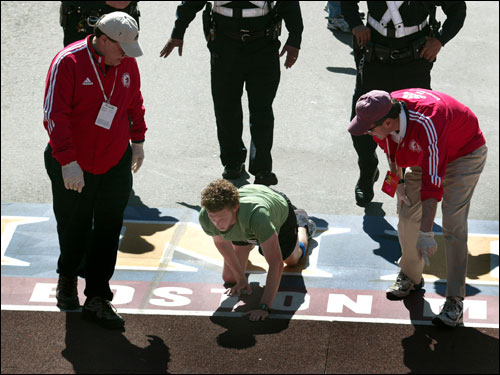 Right now I’m heading into my very last law school finals. It’s been a long 3 years and with the end finally in sight, it can be hard to stay focused and motivated. But I think about my old football days, and how the fourth quarter was the most important part of the game. It’s when you’re most tired and you need to dig down deep to your last reserves of strength.

We’ve all probably had moments in our life when things got so tough, we just wanted to throw our hands up and quit. But it’s precisely in those times when have to grit our teeth and keeping going on. Quitting is the easy thing to do. It’s the keep-going-on that’s hard. But it’s taking the hard way that makes you a man.

When you’re lost in the Wild, and you’re scared as a child,
And Death looks you bang in the eye,
And you’re sore as a boil, it’s according to Hoyle
To cock your revolver and . . . die.
But the Code of a Man says: “Fight all you can,”
And self-dissolution is barred.
In hunger and woe, oh, it’s easy to blow . . .
It’s the hell-served-for-breakfast that’s hard.

“You’re sick of the game!” Well, now, that’s a shame.
You’re young and you’re brave and you’re bright.
“You’ve had a raw deal!” I know-but don’t squeal,
Buck up, do your damnedest, and fight.
It’s the plugging away that will win you the day,
So don’t be a piker, old pard!
Just draw on your grit; it’s so easy to quit:
It’s the keeping-your-chin-up that’s hard.

It’s easy to cry that you’re beaten-and die;
It’s easy to crawfish and crawl;
But to fight and to fight when hope’s out of sight-
Why, that’s the best game of them all!
And though you come out of each grueling bout,
All broken and beaten and scarred,
Just have one more try-it’s dead easy to die,
It’s the keeping-on-living that’s hard.