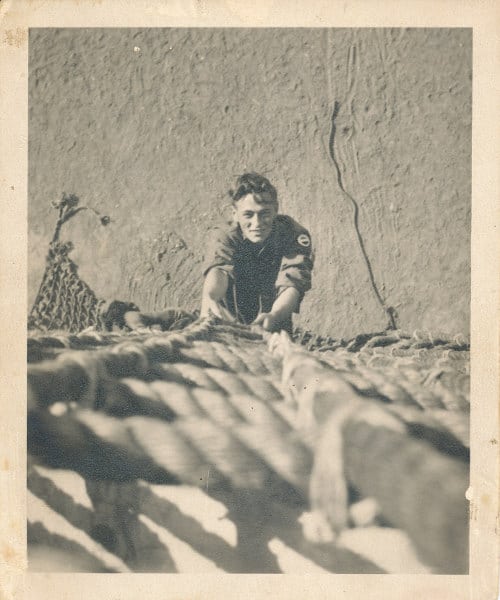 As a young man he swam the fast-flowing Niagara River at night as part of a fraternity initiation, fought battles on behalf of his unathletic older brother Elmer, worked part time jobs to buy clothes for his younger sister Ruth, and assumed the role of man in the family after his father, a traveling jazz musician, virtually abandoned his family for the sake of his career.

People who knew him say everybody simply loved Warren “Skip” Muck. Even today, more than 60 years after his death, people say they miss the man. This past summer the residents of his hometown, Tonawanda, NY, erected a war memorial with a special emphasis on remembering him.

What made Skip Muck a man we can learn from?

Like most people, Skip grew up with a mix of positive opportunities and painful givens. Yet despite his setbacks, he chose to see the world with optimism. It started at an early age. As a kid, Warren Muck never walked anywhere. He was a cheerful boy who found joy in the simplest of activities—like moving from point A to B. Whenever he moved, he skipped. That’s how he got the nickname, which stuck into his adult years.

When World War II hit, Skip enlisted to become a paratrooper with Easy Company, 506th PIR, 101st Airborne, the men who would later become known as the Band of Brothers. Skip loved being a paratrooper, even though the training proved brutal. After a 120-mile march with full gear from Toccoa to Atlanta, his friend Don Malarkey’s legs were so sore from the weight and constant pounding of carrying a mortar unit on his back he could only crawl. He began to head to the mess tent on all fours. When Skip spotted Don he grabbed both mess kits and said, “No friend of mine crawls anywhere.” Skip went and filled both mess kits with food and came back to the tent to eat with Don.

PFC Tony Garcia was a replacement in Skip’s mortar squad, and under Skip’s command. Tony said that once he went off base one weekend without a pass while in England to have a little fun, and Skip found out about it. Skip could have turned him in and gotten him tossed out of Easy Company, but instead, he just chewed him out and ended it there. Tony was always grateful to Skip for his flexibility, and never put Skip on the spot again.

Little is recorded about Skip’s involvement with specific battles, but a clipping from the Buffalo Evening News names Skip as part of a small force of 101st Airborne paratroopers who turned the tables on a larger group of German paratroopers north of Nijmegan. Skip was awarded a Bronze Star for courage during this battle.

The battle would be one of his last. On January 9, 1944, Skip and his good friend, Alex Penkala, were huddled in the snowy Bois Jacques woods during an artillery barrage when an enemy shell hit their foxhole and exploded. A friend ran to check on Skip and Alex but found only pieces of their bodies and part of an old sleeping bag.

Today, the men of Easy Company are hesitant to talk about Skip. It still brings up too many painful memories. When they do talk, they describe him as the best-liked man in the company. 1st Sgt. Les Hashey said simply, “We all loved him.”

Actor Richard Speight, who portrayed Skip in the HBO miniseries Band of Brothers, and later spoke at the memorial dedication in Tonawanda, studied people’s recollections of Skip extensively as part of the preparation for the series and has remained a close friend of Skip’s family ever since. When asked what made Skip so admirable, Richard’s wrote:

I don’t think his legacy is a military one. I believe it’s more universal and grander in scope. Skip serves as an enduring example of one who thinks not of himself but of the people and the world around him. Those are the ones who truly make a difference.

It would be easy to attribute Skip’s heroism to some special power, some unique gift he and others like him possess that we regular folk don’t. But the truth is, he was just a man who dug down deep inside and found the courage, strength, and drive to do what was needed.

He has left me and countless others wondering if we would have made the same choices. Would we have found that courage in ourselves? Do I have the strength of character to do what needs to be done?


Marcus Brotherton’s most recent book is A COMPANY OF HEROES, where he interviewed relatives of deceased E Co veterans.