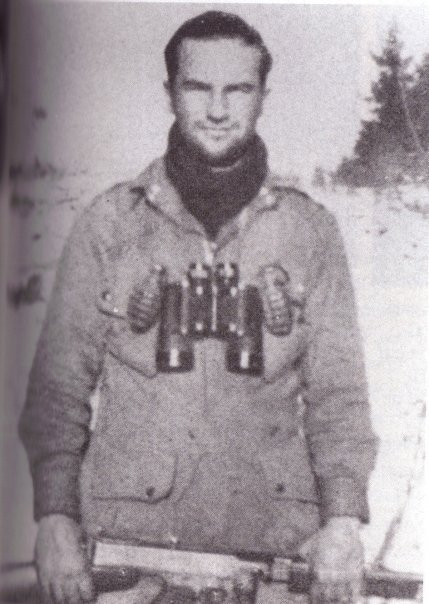 Editor’s note: Tomorrow marks the US observance of Veteran’s Day. In the weeks preceding this holiday, we have published a series of short profiles written by Marcus Brotherton about the men from WWII’s Easy Company. Today’s final installment covers the life of Ron Speirs.

Lt. Ronald Speirs was a pit-bull of a soldier, distinctively tough, exceptional and intimidating. He was the last commander of the legendary Easy Co, 506th PIR, 101st Airborne (the Band of Brothers), and led the company longer than well-known Lt. Dick Winters.

Speirs’ men would follow him anywhere. Yet he was a controversial leader. Brutal and death-defying stories abound about Speirs:

Speirs’ nicknames included “Bloody” and “Killer,” but is the reputation valid? And if so—or if not—what can we learn from a man like Speirs?

His stepson Marv Bethea considers Speirs’ strongest trait not to be bloodthirstiness, but conscientiousness. “He was a man who followed orders absolutely,” Bethea said. “No matter what needed to be done.”

For instance, no eyewitnesses have ever stepped forward to confirm the rumor of Speirs shooting prisoners on D-Day, but Bethea doesn’t doubt its plausibility. “The soldiers parachuted into the middle of extreme hostile territory,” Bethea said. “If they caught enemies, their unofficial orders were to take no prisoners. You can’t bring prisoners with you in that kind of battle. Do you turn them loose so they turn and kill you? Undoubtedly Speirs thought, ‘Somebody’s got to do this awful deed, and I’m in charge.’”

Regarding Speirs killing his own sergeant, a letter Winters wrote to historian Stephen Ambrose in 1993 clarifies the situation. Winters noted how the drunken sergeant twice ignored a command given by Speirs to halt an advance toward St. Come du Mont. The incident took place under heavy fighting when the soldiers were extremely exhausted. Winters wrote, “[By shooting the man,] Speirs probably saved the lives of the rest of the squad. The reason goes far beyond shooting [the sergeant] because he was drunk.”

Throughout the war, Speirs was seen doing his duty, no matter the cost. In Normandy, he was wounded in the face and knee by a German potato masher hand grenade, evacuated to a hospital, then rejoined his unit in England prior to the Holland jump.

While on reconnaissance in Holland, Speirs paddled across the Neder Rhine alone at night. The enemy opened fire and he dove into the water after taking a German bullet in his butt. He surfaced and swam to shore where he was found bleeding and exhausted. In spite of his wound he brought back vital information and later received the Silver Star for his actions.

With Easy Company wrongly positioned and staying put as sitting ducks behind a haystack during the attack on Foy, Speirs was ordered to relieve Lt. Norman Dike, who had bungled the operation. Speirs, then the commander of D Company, sprinted to Dike and blurted out, “I’m taking over.” With Speirs now in charge, Easy Company surged into Foy and took the town.

In contrast to his nearly super-human deeds of toughness, Speirs had a softer side. Prior to the Normandy invasion, Speirs met an English widow. They married and had a son together. The woman’s husband had been reported dead, but he was actually in a POW camp and showed up alive at the end of the war. The woman returned to her first husband. In spite of the difficult situation, Speirs managed. He wrote to Winters in the early 1990s:

“My son Robert, born in England during the war, is now an infantry major with the Royal Green Jackets Regiment. His English mother died some years ago. Last summer I visited Robert at his 200-year-old house in England. His three beautiful children are my pride and joy.”

Speirs made the military his career. During the Korean War he commanded a rifle company. He became the U.S. Governor of Spandau Prison in Berlin, which housed key Nazi war criminals. His final assignment was at the Pentagon. He retired in 1964 as a lieutenant colonel.

His last years were spent quietly with family in California. He doted on his grandchildren, taking them to the park. He developed Alzheimer’s-like symptoms and slowly faded, dying in 2007.

How should Speirs be remembered? At the end of WWII he wrote one of his men, Forrest Guth, who had gone home early and was desperately missing the camaraderie of his outfit. The four-page letter is dated June 11, 1945, and full of chatty news, not exactly the kind of letter a bloodthirsty killer would write.

The men stayed in contact over the years. Guth wrote to Speirs a final time on June 11, 2006, exactly 61 years after Speirs’ first letter. Guth referred to the original and wrote: “Your letter helped me endure the loneliness of not being with my old friends.”

Bethea put it into perspective. The name “Ron Speirs” will always be associated with deeds done during WWII, he said. This letter indicates to me how much he cared for each of his men individually. That is much.