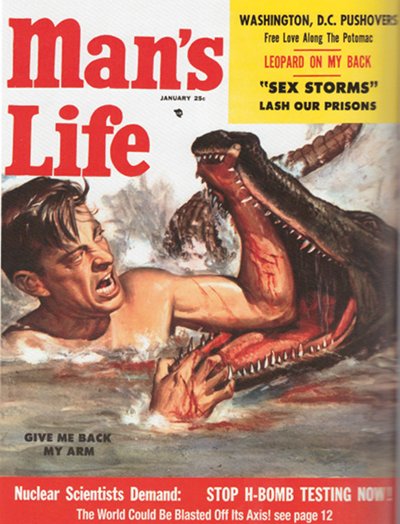 Imagine this situation—you take a break from your exploration of cannibal-infested, uncharted jungle to set up camp along the river when your female traveling companion informs you she’s off to bathe in the river. She leaves you to set camp and start the fire. And start a fire you do, without matches.

But just as you’ve gotten the fire going, a scream breaks the jungle’s tranquility. You race down to the river bank and find yourself faced with a situation bred to test your mettle.

An alligator is approaching your lady love, and the only way to save her is to wrestle the cold-blooded terror into submission.

Here’s how to wrestle an alligator.


Step One: Getting on the Alligator’s Back

Possibly the most dangerous part of wrestling an alligator is getting on its back. Never attempt to jump an alligator from the side or from the front. Doing so is the easiest way to get bit. You want to approach the alligator from behind. If possible, have someone distract the animal so it doesn’t turn to keep an eye on you.

However, if that’s not possible, take off your shirt and use it as a blindfold (or use a towel). Throw your shirt on the top of the gator’s head, making sure to cover its eyes. Without sight, the alligator is much slower to react.

Draw a straight line down the alligator’s head and back, and tail if possible. Get a running start down that line and, staying low, leap onto the animal with hands extended forward. You want your hands to land at the alligator’s neck, between the back of its jaws and the front legs. When you land on the animal, push down with all your might on the neck to force the head to the ground.

Alligators open their mouths the same way humans do. That means the bottom jaw moves—the top doesn’t. By pinning the head to the ground, you’re preventing the jaws from opening.

You should be high on the gator’s back, near the front shoulders. Your knees should touch the ground but squeeze the animal’s flanks. The lower part of your legs should be pinning the hind legs while keeping the feet from touching the ground.

Keeping the rear legs from the ground helps prevent the alligator from “death rolling” (spinning around violently). When an alligator does this, you’ve lost control of the animal.

Step Two: Getting Control of the Mouth

Once on the gator, it’s important to gain control of the mouth. Both hands should still be firmly on the alligator’s neck, pressing down hard with your full body weight.

Rule of thumb: you’re not going to hurt the alligator, but it can certainly hurt you. Always use all your strength. But remember, technique is more important than brute force.

Rotate the dominate hand (right or left) forward. Remain in contact with the alligator and keep pressing down as you slide the hand forward down the middle of the alligator’s head. You want to cover both eyes with your hand. Alligators retract their eyes into the skull, so just coming into contact with them should be enough. Again, you’re blinding the animal to give yourself the advantage.

Now, press down on the eyes with all your weight. Again, pin the head to the ground to prevent its jaws from opening. Slide your other hand forward and down and run it along the bottom jaw line. Put your fingers under the gator’s jaw and you’ll feel soft skin around bone. With fingers under the jaw and palm and thumb on top, grip firmly.

All of an alligator’s jaw power is on the down stroke. They have almost no muscle power when it comes to opening their jaws. What that means is that you can hold the animal’s mouth shut with one hand. It doesn’t mean you should hold it closed with one hand, though.

Still keeping the head pinned to the ground, slide the hand covering the eyes down until it too can hook the lower jaw.

Both hands should now be holding the mouth shut.

Lift the alligator’s head off the ground and toward your chest. Once the head is at close to a ninety degree angle, the gator can no longer fight back.

Step Four: Getting Away

Now comes the tricky part… How do you get off?

When you’ve saved your lady love, it’s time to release the animal and make a quick retreat.

Grip around the neck. In one motion, throw the alligator as far forward as you can while you jump back. Depending on the alligator’s weight, you might not be able to throw the animal far and that’s okay. Six inches may be all you need to throw it forward. By throwing the animal forward you’re putting it off balance and giving yourself more time to escape.

Jump back as far as you can, and then keep moving backward. The gator is likely to turn and open its mouth at you and snarl or hiss. Let it. Keep your eyes on it and slowly back away. If the gator chases you, run directly away from it in a straight line. It will quickly grow tired and turn back to the water.

That’s how to wrestle an alligator.

Now you too can be like Michael Douglas in Romancing the Stone or Tarzan. You can save your Jane.

Ty Karnitz is a wildlife educator and large animal trainer at the Jungle Adventures Zoo in Florida and has personal experience working with alligators.