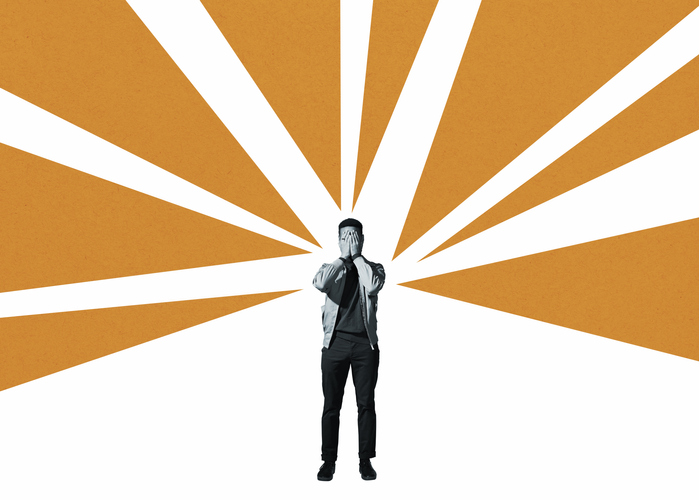 Does it feel like the world is out to get you?

Does it seem like everyone you know is an a-hole?

Does it feel like your life is going nowhere and that you’ll always be a loser?

If you answered “yes” to one or more of the above questions, then you might be a miserable SOB.

In the book, Burns highlights eleven common cognitive distortions people engage in that make them feel absolutely miserable. These cognitive distortions are erroneous thought patterns that give everything a jaundiced tint and sicken how you feel about yourself, other people, and the world around you. According to cognitive behavioral therapy, a big reason people feel miserable is that their thoughts are jacked up. Fix the erroneous mental models, and you fix the bad feelings.

Below we highlight the eleven cognitive distortions that people engage in on the regular, and which may be making you feel miserable. With each, we’ve included the definition Burns gives of the distortion in his newest book, Feeling Great, along with a thumbnail sketch of it that can help you recognize that distortion in your own life.

1. All or Nothing Thinking

“You look at things in absolute, black-or-white categories, as if shades of gray do not exist.”

“If I never write a bestselling book, I’m a failure.”

“Because I’ve discovered these flaws in my faith, the whole thing is a lie.”

“She forgot my birthday, so she’s not worth having a relationship with.”

Most things in life aren’t black and white. Overly dualistic thinking isn’t true to reality. Life is full of nuance. A goal can be worth pursuing even if it doesn’t garner the highest success; there are worthwhile things in both flawed people and flawed philosophies.

“You generalize from some specific flaw, failure, or mistake to your entire self. Or you may generalize the way you feel right now or some negative experience you’ve just had, to the future.”

Overgeneralization is all about lending a globalized import to a discrete mess-up. You make a mistake at work and decide you’re incompetent at your job. You lose your temper at your kids and decide you’re a bad dad.

Overgeneralization deals in “always” and “never”: You make a cutting comment to your girlfriend and think, “I always ruin my relationships.” You miss one workout and think, “I’ll never get in shape.”

You can also overgeneralize with other people by taking a specific flaw, and deciding it’s indicative of their entire character. For example, because your co-worker whistles annoyingly, you decide he’s entirely inconsiderate . . . ignoring the way he always brings donuts to meetings and helps you troubleshoot your software.

“You filter out or ignore the positives and focus entirely on the negatives.”

Your mind is like Velcro for the negative and Teflon for the positive; bad things persistently stick in your head, while good things slide off and into the realm of non-awareness.

“You tell yourself that your positive qualities or successes don’t count.”

This is related to mental filtering. The difference is that you do recognize the positive qualities in yourself or in another person . . . but then you convince yourself that they don’t “count.”

“My last idea went over well, but it won’t get me any closer to getting the promotion.”

“Yeah, I did lose some weight this week, but it doesn’t matter because I still look like the Pillsbury Doughboy.”

“That woman may have said that I looked handsome, but she was just being nice.”

“You jump to conclusions about how others are thinking and feeling without any clear evidence.”

Humans are terrible mind readers, but that doesn’t stop us from trying to be clairvoyant. And when we do read the minds of others, we typically assume — without evidence — that they’re thinking the worst about us.

“My boss didn’t say anything after my presentation because she thinks I did a bad job.”

“That woman smirked at me because I’m unattractive.”

“My friend hasn’t answered my text because I’m not important to him.”

“You make arbitrary and disturbing predictions about the future.”

Catastrophizing happens when you make seemingly logical jumps between a catalytic cause and a sequence of subsequent potential effects, creating a chain that ultimately leads to an illogical final conclusion. For example:

Each little jump in such a line of thinking seems reasonable, but it’s pretty unreasonable to conclude that just because you get a D in a college class, you’ll die alone.

“You exaggerate the negativity in a situation and minimize the positives.”

Seeing the world through a lens that magnifies the negative and minimizes the positive — a lens of consistent pessimism — contributes to depression and just feeling unmotivated in general. If all you see are the downsides of your job (a cold boss), and you minimize its positives (enjoyable co-workers), it’s going to be hard to get out of bed each morning.

“This involves reasoning from how you feel: ‘I feel like an idiot, so I must be one’ or ‘I feel hopeless, so things are never going to get better.’”

After a terrible fight with your significant other, you think, “She is the worst person, and this relationship isn’t working.”

After a thoroughly romantic date with your significant other, you think, “She is the only one for me. I’ve never been happier.”

Which is the “truth” about your relationship?

Feelings fluctuate. And while emotions can be a source of reasoning, they need to be trained to align with your intellect. People who take part in maladaptive emotional reasoning completely substitute feeling for cognition. Whatever they feel and only what they feel is reality.

So if they feel bad, something must be wrong with them or the world around them.

But that might not be the case. Sometimes you feel crummy for no reason in particular. Sometimes you’re suffering from emotional contamination, and a bad day at work infects how you feel about your family. Sometimes a confluence of unfortunate circumstances come together to create a cluster of chaos, but these circumstances represent an aberration, rather than a norm from which to draw any kind of conclusions.

“You criticize yourself or other people with shoulds, shouldn’ts, musts, ought tos, and have tos.”

“Shoulds” are expectations and standards that may be arbitrary in nature. We can feel guilty when we don’t live up to what we think we’re supposed to do (even if we’re not obligated to do it), and angry and frustrated when people and the way the world works don’t meet our expectations (even if we’ve never communicated those expectations and/or they’re unfair and unreasonable ones to have).

“Labeling is an extreme form of overgeneralization in which you try to capture the ‘essence’ of yourself or another person with a one-word label.”

If garden-variety overgeneralization takes place when we draw broad conclusions based on one specific belief/behavior, then labeling is where we wholly dismiss ourselves or others by collapsing complex humans into one-dimensional categories:

Because you broke your sobriety streak you’re a “loser.”

Because your brother hasn’t repaid your loan he’s a “cheat.”

Because someone belongs to X political party he’s a “moron.”

“You blame yourself for something you weren’t entirely responsible for.”

“You blame others and overlook ways you might have contributed to the conflict.”

When mistakes and conflicts happen, the cause of it is often complex. Oftentimes you’re not the only one responsible for a problem, and neither is the other person.

Quit Being a Miserable SOB

So how do you get rid of these maladaptive mental scripts?

The first step is just recognizing them. As you talk to yourself and to others, be on the lookout for these cognitive distortions.

The second step is to challenge your negative thought patterns.

If you make a mistake at work, and catch yourself engaging in overgeneralization by deciding that the mistake means you’re a complete loser, ask yourself if that’s really true. Sure, you made an error on some report, but you’re doing pretty well in other areas of your life. Your family life is solid. You’re making progress on your fitness goals. And the majority of work days, you don’t make mistakes. So, no, you’re not a complete loser.

Do the same if you catch yourself engaging in cognitive distortions about other people. Yes, people can be annoying, and you may disagree with them, but that doesn’t necessarily mean they’re utterly irredeemable. Humans are multifaceted beings. They can’t be understood by focusing on a single trait, or described with a single word. A person can be annoying and conceited and giving and hardworking at the same time.

Look for the good in your life and in others, then, let it really marinate in your mind.

Challenging cognitive distortions is a skill that takes practice to develop. Don’t expect immediate results and prepare to have setbacks. But with time, you can rewrite the scripts that have made you feel like a miserable SOB, and begin to become a more positive, confident, son of a gun.