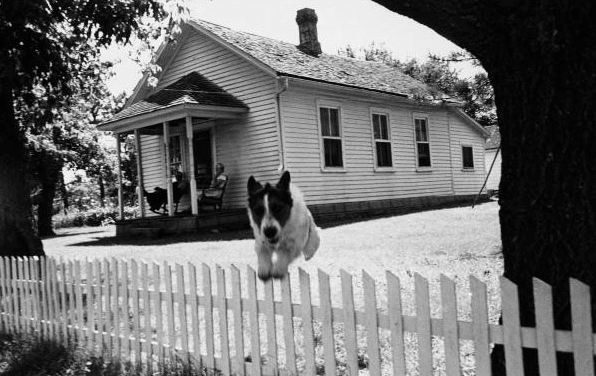 Starting in 1967, Dr. Martin Seligman began a series of experiments involving 3 groups of dogs. The first group of dogs were given electric shocks, but were able to press a panel with their nose to make the shocks stop. The second group of dogs were given the shocks as well, but had no recourse to make them stop. The third group was the control and received no shocks.

The dogs in the first and third group recovered well from the experiment. But the dogs in the second group, those that had been helpless to stop the pain, developed symptoms similar to clinical depression.

In the second part of the experiment, the dogs were placed in an enclosed box separated by a low barrier over which they could see. When the shocks were administered, all the dogs had the opportunity to easily escape the pain by jumping over the partition, and this is what the dogs in the first and third group did. But the dogs in the second group, those which had previously learned that there was nothing they could do to escape the shocks, simply lay there whimpering and took it. They had come to believe that nothing they did mattered; Dr. Seligman called this behavior “learned helplessness.”

The experiment was repeated with other animals, babies, and adult humans, and the results were the same. Once subjects had been exposed to a situation over which they had no control, they would continue to feel helpless, even in situations where they did have control.

You were an awesome boyfriend, but still got dumped or a wonderful husband who still got cheated on. You’ve always been a good person, but your father died when you were in college, while the jackasses out there still get to go on fishing trips with their dads. You put your heart and soul into your job, but got passed over for the promotion. You worked your butt off in law school, but you still can’t find a job.

When these kinds of things happen, you lose an important sense of control over your life; you stop believing you’re the captain of your destiny. You followed the rules, but you still got screwed. You feel disillusioned, and it becomes easy to develop a jaded, passive “What’s the point?” philosophy that informs all areas of your life.

But having such an experience doesn’t guarantee that you’ll develop “learned helplessness.”

During his research, Seligman noticed a curious phenomena; in all the experiments, a consistent ratio emerged: 2/3 of the test subjects which had experienced a situation over which they had no control developed “learned helplessness,” while the other third did not. They were able to see the helpless situation as an isolated event, and bounce back to proactively face future challenges.

Dr. Seligman wanted to know the secret of the 1/3 who felt helpless in one situation, but didn’t carry this feeling over to new challenges. Why did the exact same events produce such different responses? The answer turned out to be something called explanatory style.

Seligman argues that our interpretation of events can be broken down into three categories:

The authors of The Resilience Factor helpfully rename these categories in an easier to remember way and explain their meaning:

“A ‘Me, Always, Everything’ person automatically, reflexively believes that he caused the problem (me), that it is lasting and unchangeable (always), and that it will undermine all aspects of his life (everything).When problems arise, a “Not Me, Not Always, Not Everything person believes that other people or circumstances caused the problem (not me), that it is fleeting and changeable (not always), and that it will not affect much of his life (not everything).”

For obvious reasons, studies have shown that those with a “Not Me, Not Always, Not Everything” explanatory style are the most optimistic, while those with a “Me, Always, Everything” explanatory style are prone to pessimism and depression. Once MAE’s fail at something, they are susceptible to experiencing “learned helplessness” for a long time and across many areas of their life.

The effect of your explanatory style not just on your resiliency but on your whole life cannot be overstated. Those with a pessimistic, “Me, Always, Everything” explanatory style are more prone to depression, anxiety, low self-esteem, and paralyzing inertia in the face of setbacks. Those with an optimistic, Not Me, Not Always, Not Everything style, on the other hand, experience improved health and happiness and significantly more success in the workplace, at school, and on the playing field.

An Example of Explanatory Style

Let’s examine one situation and see how a Me, Always, Everything man reacts compared to a Not Me, Not Always, Not Everything man.

Len gets fired from his job:

None of use the same explanatory style with everything in our lives. For instance, while optimistic people tend to use a Not Me, Not Always, Not Everything approach when dealing with bad events, they use the opposite style when good things happen. And vice versa for pessimistic people. And we can give into “learned helplessness” even when we know it’s not our fault-it’s not “Me” but it is “Always” and “Everything.” Ie., you worked your butt off in grad school but you can’t find a job because the job market is crap. It’s not your fault but you find yourself feeling like things will never get better and responding passively to everything in your life.

Also, while a “Me, Always, Everything” approach can cause a person significant problems, always using a “Not Me, Not Always, Not Everything” style can also be unhealthy. Because sometimes it is your fault. You can slough off all of your personal responsibility for failures to keep from getting depressed, but you’ll also keep yourself from ever being successful in life. You can admit it’s your fault without going farther and believing the problem is pervasive and permanent.

Finally, sometimes you’re right to be pessimistic. A bit of pessimism keeps you vigilant and prevents you from taking foolish risks. There’s no need to be blindly optimistic; Pollyanna was never an icon of manliness.

So the key is not to wear rose-colored glasses all the time, but to be what Seligman calls a “flexible optimist.” This means seeing the world accurately, reacting appropriately-using the right explanatory style at the right time-and not letting pessimism obscure the things you legitimately have going for you.

A: Adversity. We face a setback or challenge.

B: Beliefs. Our thoughts, feelings, and interpretation of the setback. These beliefs lead to:

C: Consequences. How we act because of our beliefs about the setback.

So we can’t change the A. But we can change the B, which will lead to a new C. It’s not adversity itself that creates our reactions, but our beliefs about our adversity. If your beliefs have been leading to negative, non-resilient responses that are dragging you down, you have to short circuit this reaction by changing your beliefs about challenges.

Here’s an example of a pessimistic ABC in action:

Adversity: James frequents a coffee shop because he has a crush on the girl at the register. He finally works up the courage to ask her out. But instead of saying yes, she turns him down.

Beliefs: James thinks: “Geez, I’m such a freakin loser. I’m not attractive and don’t have anything to offer women. I’m never going to find a girlfriend.”

Consequences: James alternates between feeling depressed and angry for the next week. He can’t muster up the courage to ask another girl out for over a year.

James’ beliefs about what happened led to an overly negative reaction. To get a better outcome, he needs to change his beliefs by disputing them.

Just because you have certain beliefs, even if you have held them for as long as you can remember, that doesn’t make them true. False beliefs will limit your ability to get to the root of your problem and will limit the solutions you are able to come up with. If you have some beliefs that are sabotaging your resiliency, you need to dispute them, challenge them, and have an argument with yourself.

Dr. Seligman recommends judging your beliefs on 4 criteria. Let’s take a look at them and explore how James could have reacted more resiliently to the rejection he received:

1. Evidence. What are the real facts in the situation? Does the evidence support your belief or vanquish it?

2. Alternatives: Pessimists have a tendency to latch onto the most dire of explanations for a bad event, ignoring more positive alternate explanations.

3. Implications. When faced with a setback, pessimists have a tendency to jump to more and more catastrophic implications. But what are the chances of these implications really happening?

4. Usefulness. Just because a belief is true, doesn’t mean it’s useful. Clinging to useless beliefs keeps you from working on the things that you actually can change about yourself.

Whenever faced with an ABC, practice disputing your beliefs; have a knock down drag out fight with yourself and figure out what’s really going on. It may be beneficial to journal it, as writing can help you sort through why you’re feeling the way you are, and whether your beliefs are distorting what is really going on. It can also be helpful to have a spouse or trusted friend do the disputing for you. Tell them what you’re upset about and have them challenge you on your beliefs, asking you questions to figure out just how accurate your beliefs actually are.

While at first it will take some effort to stop in the midst of your negative reaction and work on disputing your beliefs, over time it will become natural and will help you respond appropriately, positively, proactively-and resiliently to your challenges.

The Fine Art of Forgetting

Sunday Firesides: Do Your Part to Revive Tired Words