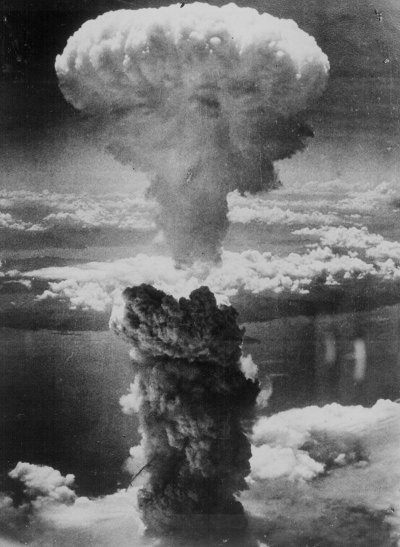 When we began this series, I related how I became interested in the topic of resiliency while I was in law school. Every semester I had a tough time waiting for my final grades to come in and would spend the time engaged in what my wife called “logging out”: laying on the couch being depressed.

My log-like state was caused by thoughts that generally went like this:

“I’m going to fail Partnership Law. And if I fail that class my GPA will drop, and I’ll lose my scholarship. And then I’ll have to take out big loans to pay for school. And I won’t be ranked in the top ten anymore, so I won’t get a job at a big law firm. I won’t be able to get a job anywhere. Then I won’t be able to support my family, and I’ll be mired in debt.”

In short, I had myself believing that one bad grade would lead me on a non-stop train to the flophouse. I was engaging in what psychologists called “catastrophizing.”

This second to last entry in the resiliency series isn’t too deep or complex, but it can teach you a quick and dirty trick to keep your thoughts from turning into a train wreck.

Catastrophizing essentially involves imagining and dwelling on the worst possible outcome of something. It’s basically overreacting and letting your thoughts run away to dire and highly unlikely scenarios. It’s the kind of thing that happens when you’re lying awake at three in the morning worried sick about the future and what’s going to happen to you.

Catastrophic thinking proceeds like a chain. One “what if” leads to another until you’re picturing yourself homeless on the street.

Catastrophizing can take two forms. It can spring from an actual event, like taking law school finals. Or it can simply be the product of gazing into the future and imagining one’s life taking a terrible turn.

Why Is Catastrophic Thinking So Seductive?

Catastrophizing leads to pretty irrational conclusions. If you’ve ever indulged in it around other people, they probably told you to stop thinking so crazy. I know Kate continually tried to show me that my logging out was really illogical. But the catastrophe chain feels real to you, and it’s hard to snap out of. Why?

While the leap all the way from point A to point B seems illogical, each little link in the chain doesn’t seem that improbable. Your mind goes from each semi-logical link to the next, so by the time you’ve reached the end, the outcome seems entirely plausible.

Here’s a scientific diagram I made to illustrate how this works: 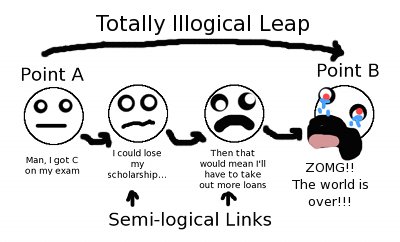 The breakdown in logic that occurs when catastrophizing results from thinking that each link in the chain will definitely lead to the next. So you need to take a step back and look at what might reasonably, actually occur.

To do this, write down each step in your chain of catastrophic thoughts and challenge the plausibility of these events really happening.

Let’s say that Brian was in charge of an important sales presentation for his company. A large contract is riding on it. But Brian forgets the USB stick that held his PowerPoint presentation. Humiliated, he stumbles through an off the cuff speech that clearly leaves his potential clients underwhelmed and unconvinced. As Brian sits at his desk after the presentation, his mind is reeling down Catastrophe Lane.

“The company is not going to get the contract because of my awful presentation. So my boss will fire me. I’ll never find another job as good as this one. We won’t be able to pay the mortgage, and we’ll lose the house. If we lose the house, my wife is going to leave me.”

Brian needs to break this chain of catastrophic thoughts by writing down each link in the chain and then assigning each link a number from 1-10 that represents the likelihood of that event occurring. A 10 means it will definitely happen; a 1 means it’s nigh near impossible. At the same time, he thinks through some reasons why the event won’t happen.

Hopefully in making this list and looking at the real probability of these things happening, Brian could see how quickly the logic of the chain unraveled as it went along. Just the act of putting your thoughts on paper and generating reasons for why things won’t happen that way will significantly clear your head, calm you down, and boost your confidence.

Come Up with a List of Proactive Steps to Take

We’re prone to catastrophizing when we feel like we don’t have control over what’s going to happen to us. So another key to battling catastrophic thoughts is generating a list of things you can do to keep your worst case scenarios from coming true. You’ll feel far more calm and confident when you have a plan in place, any kind of plan at all.

After you make the list, go to work taking those next steps. Taking action will make you feel in control and far better than a log.