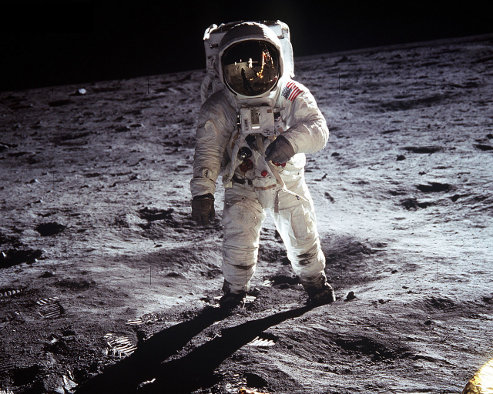 40 years ago today on July 20, 1969, a decade of preparation and centuries of imagination culminated in man’s first steps onto a celestial body other than Earth. As Neil Armstrong climbed down the ladder of the Lunar Module Eagle, he uttered the timeless words that would forever stand as testament to mankind’s ability to achieve greatness in the face of seemingly overwhelming challenges.

“That’s one small step for (a) man, one giant leap for mankind.”

The following is a tribute to the men and mission of Apollo 11 and to the courage of those who had the will to pursue the dream of space.

On May 25, 1961, some 48 years ago and at the height of the space race, President John F. Kennedy stood before a Joint Session of Congress and made a bold statement that set events in motion that, for the remainder of the decade, would captivate the world.

“First, I believe that this nation should commit itself to achieving the goal, before this decade is out, of landing a man on the Moon and returning him back safely to the earth. No single space project in this period will be more impressive to mankind, or more important for the long-range exploration of space; and none will be so difficult or expensive to accomplish.”

He would further reiterate this goal to the American people at a speech at Rice University on September 12, 1962. In this, one of the finer presidential speeches ever delivered, Kennedy offered the reasoning behind such a daring mission, and it is one that speaks to the hearts of all men, even today.


At the time of Kennedy’s speech before Congress, America had not yet even placed a man into orbit around the Earth, much less the moon, a target more than 240,000 miles away.  And yet, NASA rose to the challenge. Following the successes of the Projects Mercury and Gemini, NASA engineers immediately began work on several missions that would culminate in the daunting task of placing a man on the moon and returning him safely to Earth: Project Apollo.

The Apollo Program suffered a tragic setback in its opening moments when a spark inside the sealed cockpit of the Apollo 1 ignited the oxygen rich atmosphere of the command module during a preliminary test, killing all three astronauts inside.  Later investigations would expose significant design errors with the command module and the astronaut’s spacesuits, leading to a major overhaul of the equipment employed in the Apollo Program.  The disaster of Apollo 1 did not bring an end to Project Apollo, however, and the program continued on soon thereafter.  Several unmanned missions followed Apollo 1 (Apollo 4, 5, 6) which allowed NASA to test the new equipment of the Apollo program, including the massive Saturn V rocket, the most powerful machine ever built by the hands of man. The Saturn V rocket would be used to launch the ensuing Apollo astronauts out of Earth’s orbit and into their trajectory to the moon.

Manned missions were initiated again with Apollo 7, and the rapid pace of the Apollo Program was now in full swing.  On December 24, 1968, the astronauts of Apollo 8 looked upon the far side of the moon for the first time in the history of mankind.  The mission also provided the astronauts Lovell, Anders, and Borman the opportunity to take the first ever photograph of an earthrise. 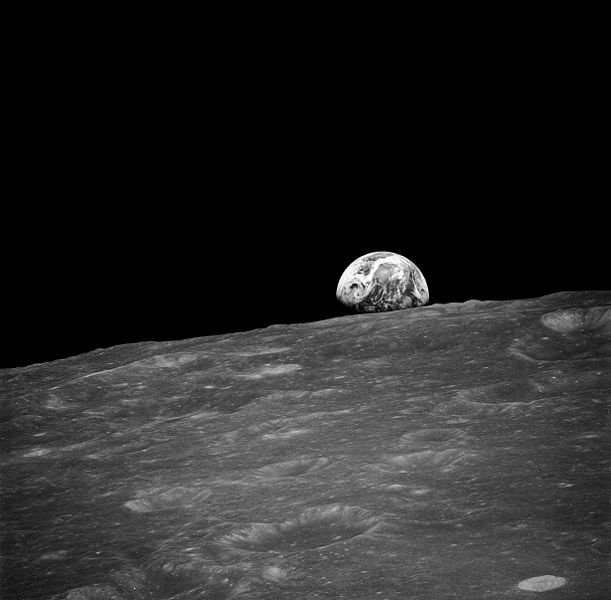 Several subsequent missions allowed for the testing of various equipment in lunar orbit, culminating in the first mission to attempt a manned landing: Apollo 11.

Chosen for the crew of Apollo 11 were three veteran astronauts, all of whom had flown in various Gemini missions in the years prior.  Mission Commander Neil Armstrong was a former Navy combat aviator and test pilot known for being the first to pilot the experimental X-15 rocket plane into the edge of space.  Command Module Pilot Michael Collins was a West Point graduate who had also previously worked as a test pilot.  Finally, Lunar Module Pilot Edwin “Buzz” Aldrin, also a West Point graduate, was another previous combat pilot who also held a doctorate in astronautics from MIT. 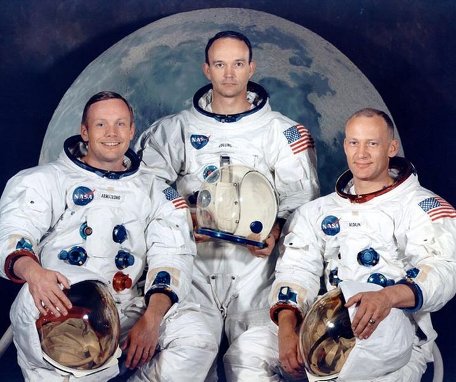 Neil Armstrong, Apollo 11 Mission Commander and natural born leader, was selected to be the first man to step foot on the moon upon the successful landing of the Lunar Module Eagle. Soon after Armstrong’s departure from the Lunar Module, Buzz Aldrin would join him on the lunar surface, while Michael Collins would remain in the Command Module in a low lunar orbit.

At 9:32 on July 16, 1969, the fires of the enormous Saturn V rocket thrust the men of Apollo 11 into space.  Back in Houston, Mission Control Chief Gene Kranz gathered his senior team around for a few final words.

“From the day of our birth, we were meant for this time and place, and today we will land a man on the moon … No person will leave or enter this room until we land, we crash or we abort. Those were the only three options.”

Three days later lunar orbit was achieved, and the Lunar Module separated from the Command Module with Armstrong and Aldrin inside.  Equipment errors during descent provided several tense moments for the men back in Mission Control, and the pilots had to locate a new landing area in the Sea of Tranquility, but with a remarkable 17 seconds of fuel remaining, the Eagle had landed.

8 years, 1 month and 26 days after Kennedy made his first challenge to NASA to put a man on the moon, Neil Armstrong opened the Eagle’s hatch and stepped out into another world, the first man ever to do so.  Not long after, Buzz Aldrin joined him on the surface, and the two spent more than 2 ½ hours collecting surface material.  Before reentering the Lunar Module, the men planted an American flag on the lunar surface and in some video clips can clearly be seen saluting Old Glory.  Upon reentering the capsule, they rested for seven hours before lifting off to rendezvous with the Command Module and CM Pilot Michael Collins.  Man had stepped foot on the moon at last.

The Apollo 11 mission returned safely to Earth, and the ensuing Apollo missions (12-17) would continue in its footsteps, all successfully landing on the lunar surface with the exception of Apollo 13 which had to abort its lunar landing.  The Apollo missions gradually became more complex, employing the use of various equipment on the surface, including the eventual use of the Lunar Rover.  On December 14, 1972, Commander Eugene Cernan became the last man to date to climb back up the ladder and depart from the lunar surface.

“When John F. Kennedy said we’re going to go to the moon, he was asking people to do the impossible. He’s asking us to do what can’t be done. Yet it’s all written in history now. The technology is obsolete; you hold more of it in your hand, with a cell phone, than I had in my hands when I landed on the moon. Yet it’s the human endeavor that endures — what we can do if we want it bad enough.” -Eugene Cernan

Plans for the next generation of lunar exploration are already underway, and NASA currently has a stated goal of returning to the moon by 2019.  As we wait for this event with great anticipation, we can only hope that it will reignite the zeal for space exploration that gripped the world in the 1960’s, leading us farther out into our solar system and into the great frontier of space.

“An age may come when Project Apollo is the only thing by which most people remember the United States, or even the world of their ancestors, the distant planet Earth” -Arthur C. Clarke

Listen to our podcast on the incredible story of Apollo 8: