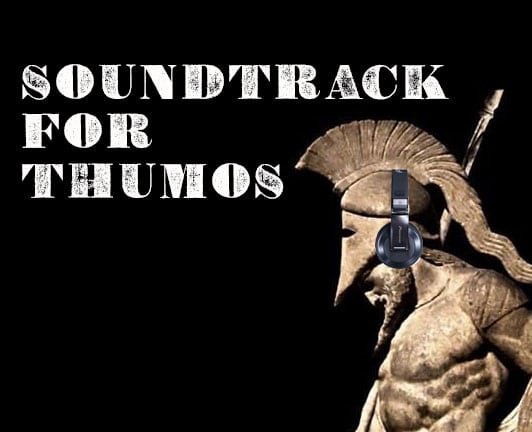 The ancient Greeks believed that a man’s soul or psyche was made up of three parts: Reason, Appetites, and Thumos. While an understanding of the first two parts of this tripartite model of the soul remains with us, the concept of thumos has been mostly lost in our modern day. We tellingly have no word that directly corresponds to it.

The Greeks believed thumos was essential to andreia (manliness) and conceived of it as an incredibly rich and complex energy. Thumos is a man’s life force – the passion that gives spiritedness to the young, and lends freshness and vigor to the old. It is the seat of emotions, and the emotion itself. The Greeks most associated it with anger, especially a righteous rage that springs to life when a man’s honor, loved ones, or community are threatened. Thumos fuels the drive of action, ambition, and the desire to fight, as well as a man’s gameness, courage, and ability to stay “in the arena” once the battle is underway. It is the “fire in the belly” that pushes a man to leave behind safety and security, to despise mediocrity, and to want to excel his fellow men and become the best of the best.

Not only does thumos represent a man’s fighting spirit, but also the energy of discernment and deliberation. It acts as an aid in decision-making and problem-solving. A man ponders possibilities in his thumos, and in turn, it offers inspiration on what course of action to take.

Because the ancient Greeks thought of thumos as a distinct part of a person, they believed you could talk to it — tell it to endure, to be strong, or to be young. In The Iliad, Achilles delights his thumos by playing the lyre.

Thumos is hard to describe, but easy to feel coursing through you. Luckily, not only can you please your thumos with music, you can also use music to fire it up.

Thumos music is akin to “pump up music” — but not identical. It’s not about whipping yourself into a super agro state, and it doesn’t just prime your body for brute force action. You feel it in your bones and your brain. It activates both the primal and higher parts of your spirit. It sweeps you along through the troughs and pinnacles of the human experience — not just anger and joy, but grief and sorrow. It momentarily pulls back the veil on an ideal that is usually so ineffable and inaccessible — greatness. Basically, thumos music makes you feel alive.

Below are several albums and songs that are guaranteed to invigorate your thumos. It’s what I listened to while writing the Semper Virilis series a few months ago, and it continues to be my soundtrack for thinking and writing about heavy, deep, and complex topics. I’ll also listen to my thumos soundtrack when I’m working out; it makes those deadlifts and HIITs seem even more legendary.

Most of the music in my thumos soundtrack comes from orchestral soundtracks from epic films. There’s something about orchestral music, especially when woven with intense chanting choruses, that deeply stirs the “fire in the belly.” Maybe epic movie soundtracks tap into that primordial, Dionysian part of our brain the same way that the music and chanting choruses that accompanied the tragedies of the ancient Greeks invigorated the Hellenistic spirit. Maybe it’s the timelessness and majesty of orchestral music. I don’t know. I just know that when I listen to it, my heart beats a bit faster, the hairs on my arm stand up, and I feel primed for inspiration and ready for a fight — be it physical, mental, or spiritual. Watching the movies that accompany these soundtracks is another great way to boost your thumos, but that’s another post.

When you need to not only get pumped up for something, but to show up fully alive for it, listen to songs that awaken your thumos. Whether it’s reaching a new PR on your deadlift, playing in the state championship game, writing a research report, shaking off the bad mojo lingering from a break-up, summoning the courage to quit your job, or whatever challenge you’re facing, this is the soundtrack for you. While all the songs on these albums are great for thumos, I’ve handpicked a few of my favorites from each one. Hopefully it will serve as a starting point for creating your own thumos soundtrack.

Follow and Listen to the Entire Soundtrack on Spotify!