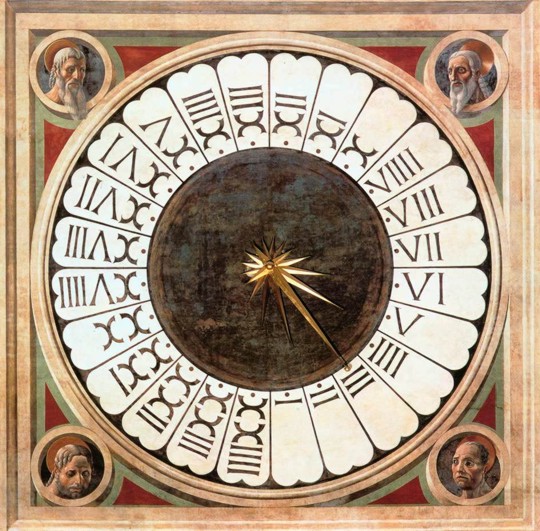 Despite the fall of the Roman Empire millennia ago and despite the ubiquitous, worldwide use of Arabic numerals (1, 2, 3, etc.), Roman numerals still pop up regularly in modern society. We see them in the names of popes and monarchs and august events like the Olympics, the Super Bowl, and WrestleMania (who can forget the drama and excitement of WrestleMania III?). They sometimes appear on the pillars of docks and the outside of the hulls of ships, to indicate how high the water is, and they’re often engraved on the cornerstones of buildings, to indicate the date they were laid. And for some odd reason, Roman numerals are used to designate the year of production on films.

There are a lot of folks who can’t remember the Roman numerals for even 1-10 (they often get hung up on 4 and 6…does the “I” go before the “V” or after?), let alone going above and beyond that. I do okay up to 50, but then things start getting fuzzy for me. The other day I was reading an old book and came across a long string of Roman numerals that was used to signify a year, but I couldn’t make heads or tails of it. I decided it was time for a little refresher on my Roman numerals.

Whether you don’t know the Roman numeral for 5 or 500, here’s a quick primer to get it all sorted out.

Several hypotheses exist as to the origin of Roman numerals. The common thread through all of them is that the numerals were developed primarily as a counting system for commerce, with the most popular theory being that they began as notches on tally sticks. A single notch represented “one.” Every fifth notch was double cut to form a “V” shape and every tenth notch was double crossed to form an “X.” The Romans later transferred this tally system to writing and designated Roman letters to certain values: I → 1; V → 5; X → 10, etc.

A defining and extremely limiting trait of the Roman numeral system is that it lacks a character to designate the number 0. The system also has no way to represent negative or decimal numbers. This all goes back to the fact that Roman numerals were developed primarily to count and keep track of things for commerce. Consequently, higher-level math was and is pretty much impossible with this system.

Even after the decline of the Roman Empire, their numerals continued to be used throughout Europe, up through the Middle Ages. It wasn’t until the 14th century that Hindu-Arabic numerals replaced Roman numerals en masse. Even after the rise of the former, the Roman system continued on as a sort of antiquated shout out to things old and classic.

How to Read Roman Numerals

1. Know the symbols and their values.

Reading Roman numerals is pretty easy once you have the basic symbols and their corresponding values down pat.

There are seven basic symbols. With these seven symbols you can fashion pretty much any number (with the exception of exotic numbers like negatives, decimals, etc.). 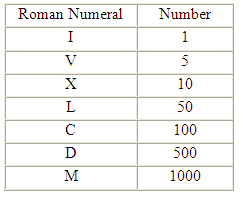 2. When one or more numeral is used to form a number, the value of each symbol is (generally) added together from left to right.


The letters are arranged from left to right in descending order of value to form a number:

The subtraction rule (usually) kicks in when you’re getting close to a number that has a unique symbol. Take 4, for instance. It’s just one number away from 5, which has its own symbol (“V”). Instead of writing out four “I”s, you’d simply write “IV,” which indicates that you subtract 1 from 5 to get 4. Easy peasy.

And what about 40? It’s just 10 away from 50 which has its own symbol (“L”), so instead of writing out XXXX, you’d simply put XL (10 subtracted from 50). Just remember, when you see a lower value in front of a higher value, this rule kicks in.

Some more examples of the subtraction rule in action:

Note: The subtraction rule is actually a modern convention. Inscriptions from ancient Rome show that while the ancient Romans used it, they didn’t really use it all that consistently. Instead, they’d just keep adding numerals until they got the number they wanted. So the number 4 was actually written out IIII and the number 9 was written out VIIII. In some instances they didn’t even use V to indicate 5 and just chiseled out IIIII.

Keep these variations in mind when you’re reading Roman numerals on old structures in Rome or while reading ancient manuscripts while on archaeological digs in Egypt (yes, I’m writing to Indiana Jones here).

4. A bar above a numeral indicates that you should multiply it by 1,000.

More examples of this rule combined with the subtraction rule:

Like the subtraction rule, the bar multiplier symbol was used sporadically in ancient Rome. They were more likely to keep adding Ms until they got to the 1,000 number they wanted. Even today, the bar multiplier isn’t used all that often. When years are written in Roman numerals (as they’re often done in movies to indicate year of production) you won’t see it. So the year 2014 would be written out MMXIV.

In many medieval texts you’ll see the addition of two vertical lines before and after the numeral along with the overline to indicate raising the multiplier bar by 100,000. So |IV| would be 400,000.

Keep in mind that unless you study ancient and medieval texts, you’ll likely never encounter the bars and line multipliers. It’s just fun trivia to know.

There you go. You’re now an expert in Roman numerals.