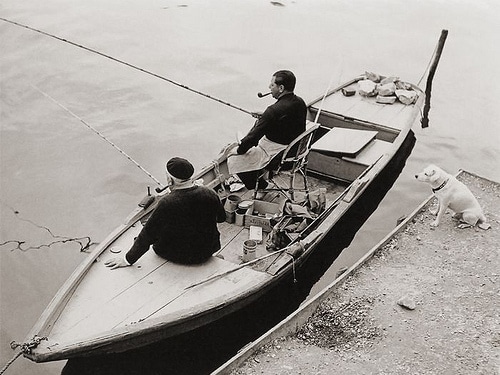 When I was 15, I met a man who would have a profound impact on my life. His name was Andrew Lester. I first encountered Mr. Lester at church. He was the fun old guy that everyone liked being around. Despite being in his 8os, he had this boyish, mischievous look to him. He also made wearing a Breath-right nasal strip look cool. He wore them all the time. Mr. Lester was an artist by trade. His mother was a Cheyenne Indian, so his art focused on Native American motifs. A tribe called him the White Buffalo, and he made a really beautiful painting representing the name bestowed on him. I have print of it hanging up in my office.

While Mr. Lester dabbled in painting, his real skill was in sculpting clay. He sculpted mammoth busts of great people from history like Martin Luther King Jr., Jim Thorpe, and Western movie star Tom Mixx. When he wasn’t working in his studio, he volunteered in various community organizations aimed at helping underprivileged Native and African Americans. Mr. Lester was very active in the African-American community in Oklahoma and founded the Oklahoma African-American Museum Hall of Fame.

When I first saw Mr. Lester at church, I never thought he would become a mentor and good friend to me. But by chance, I was asked to regularly visit him and his wife to help them out around their home. Little did I know the impact this man would have on my passage into manhood.

A few weekends a month throughout high school, I would drive up to Mr. Lester’s home in Guthrie to visit him. Our visits usually began with me doing some chore around the house or in his art studio. This often involved me pulling some weeds or moving the big clay busts around in his studio. He sometimes had me actually work on his busts. I remember doing some fine tuning to Tom Mixx’s hat and nose with a chisel and some sandpaper. 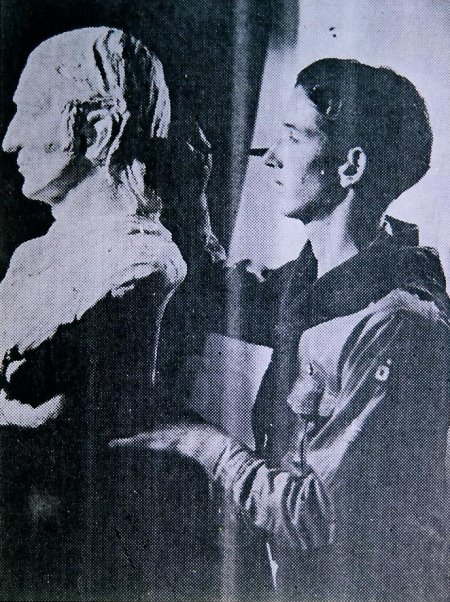 After I finished my task, Mr. Lester and I would go to his living room or studio just to talk. He’d share with me stories from his life. I learned how as a teenager in the 1920’s, Mr. Lester hitchhiked all the way from Cheyenne, OK to San Antonio, TX just to see if the Alamo would display a bust of Davy Crockett that he had sculpted. They agreed. The sculpture is still there today.

He shared with me his experience as an art teacher for troubled students in inner city Los Angeles during the 1960s. This was an intense time to be a white guy living in that part of LA. Racial tensions were high and boiled over in 1965 during the Watts Riot. But despite being a white guy from Oklahoma, Mr. Lester was able to make fast friends with the students in his class. And he quickly became involved with helping the African-American community in the city.

With each story, Mr. Lester would always impart a life lesson. He’d used the story about his trip to San Antonio to teach me about doing whatever it takes to accomplish a goal in life. His experience in Los Angeles conveyed to me the importance of tolerance, respect, and compassion for people who are different from you and that a real man will stand up for the oppressed and downtrodden.

Mr. Lester would always ask me about what was going on in my life. He’d listen intently and provide some counsel and words of encouragement or sometimes a verbal kick in the butt if I needed it. After each visit with him, I felt uplifted and edified.

But my friend and mentor became sick. He was diagnosed with cancer. Our visits became shorter. It was hard to see this man who was once filled with mischief and vitality become weak from the chemo. But Mr. Lester still shared stories and lessons, and he still gave me advice and counsel.

Mr. Lester died during my senior year of high school. I remember driving up to Cheyenne, OK, to see Mr. Lester return to his birthplace. His final resting ground was appropriate; Cheyenne’s wide open skies and desert landscape provided enough room for a spirit as big as Mr. Lester’s to roam. 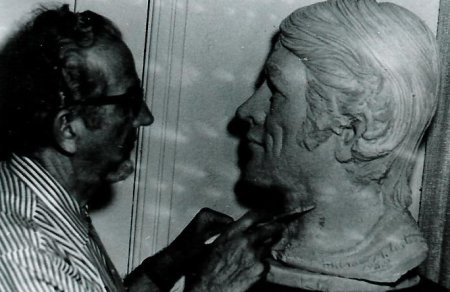 Andrew Lester Working on a Bust

It’s been almost ten years since Andrew Lester died, but I can still vividly remember the conversations we had and the lessons he presented to me. From Mr. Lester, I learned the importance of being an honorable man. I learned that success in life requires tenacity and enthusiasm. I learned that the strong should look out for the weak. And I learned the value of respect towards all men, no matter their race, creed, or social background.

Listen to our podcast on the power of mentors:

There are some lessons and bits of wisdom that only a man can impart to another man. Men and women are different. We view and interact with the world differently. So it makes sense for men to seek out other men for guidance on how to navigate life.

Unfortunately, it seems like a generation of men went without mentors growing up. We hear on the news about absent fathers and the effect it is having on young men today. Even when a man has a father he can look up to, it takes a village of man mentors to raise a child. Yet men find themselves more and more isolated, without the community ties and relationships that helped previous generations learn the art of manliness. Without good examples of men to emulate, young men often get a bit lost. Studies have shown that the lack of a male figure in a boy’s life increases the likelihood that the lad will perform poorly in school or get involved in crime. And beyond the obvious consequences like crime and education, this void can affect a man in a myriad of subtle ways.

In addition to providing some guidance in navigating through life as a man, mentors can expand one’s view of what it means to be a man. Every man has had different life experiences and been exposed to different philosophies and worldviews. They’ve been brought to their knees by different trials, been carried away in different joys, and have learned unique bits of wisdom. They can help you see things a different way, inspire you to dare greatly, comfort you when you grieve, and help you become a better man.

4 Man Mentors Every Man Should Seek

I will always cherish my friendship with Andrew Lester. He was able to pass down his eight decades of wisdom to a young man still trying to find his way in the world. Whether you’re 15 years old or 40, every man ought to have an older friend. Think about how you viewed your life and the world just 5 years ago compared to how you see things now. Now imagine having several more decades of life experience added to that. An older friend has a lifetime of knowledge to pass to you. And most older guys love to share those lessons with others. To find an older man mentor, strike up a conversation with an older man at church, join a fraternal lodge, or start volunteering at a senior center. An older man mentor doesn’t have to be elderly either. If you’re 20, having say, a 40 year old man friend can be quite enriching.

Learning the ropes of a new job can be pretty nerve-racking. Even when you’ve been on a job for awhile, it can be difficult to understand office politics or how to move-up in your position. This is why finding a professional mentor is so essential. Seek out a guy at work who has been there awhile and who is in a position you eventually want to attain. A professional mentor can give you honest feedback about how you’re doing, warn you about what not to do, introduce you to valuable connections, give you advice about how to get promoted, and put in a good word for you to the higher-ups. Perhaps most importantly, a professional mentor you can truly trust becomes a friend you can go to when you’re having a terrible day at work and need to vent. They’re probably just listen to you, chuckle at your amateurishness, and point you in the right direction.

Be a Man Mentor

Just as you need man mentors, so too do other men. No one needs guidance in the art of manliness more than boys and young men, who are trying to figure how to become worthy men. Every man should make mentoring a part of his life. Here are just a few ways to do that:

How about you all? What has been your experience with mentors? Is there a man mentor who has had a profound influence on your life? Are you mentoring a young man now? Drop a line in the comment box and share with us.