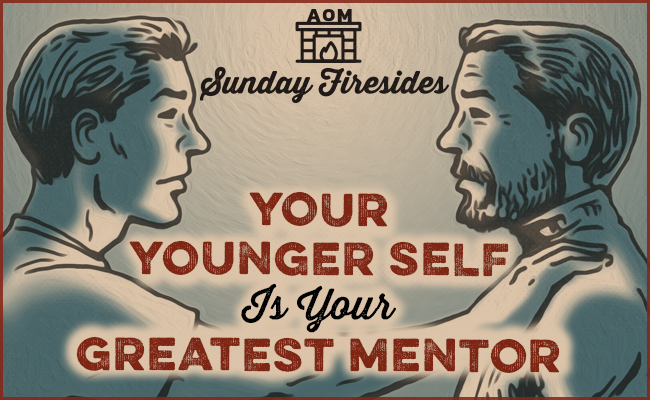 Everyone hopes to find good mentors in life — folks who shape your character, point you down positive paths, and model new possibilities for living.

We typically think of mentors as being older, and found at school, work, church, etc. But they can in fact be younger, and more intimately proximate than you ever imagined.

When something reminds you of a past period in your life, the trigger can stir poignant recollections; for example, drive by your old high school, and feelings of nostalgia burble up.

The further away in time you get from that period, however, the more detached you begin to feel from it. In fact, the person who inhabited those memories almost begins to feel like someone else. As the poet William Wordsworth observed:

. . . so wide appears
The vacancy between me and those days,
Which yet have such self-presence in my mind
That sometimes when I think of them I seem
Two consciousnesses — conscious of myself,
And of some other being.

It may seem odd to think of your past and present selves as distinct individuals, but this lens is quite illuminating once you realize the former don’t just represent anyone, but rather an ever succeeding set of your life’s greatest mentors.

Your past selves are obviously not mentors in the impossible sense of knowing things your present self does not. Rather, the outsized influence of your younger selves comes in the habits they cultivated and handed off; the books they read, the friendships they formed, the practices they developed made you who you are today.

Given this, what habits will you implement now, to guide your future self right?