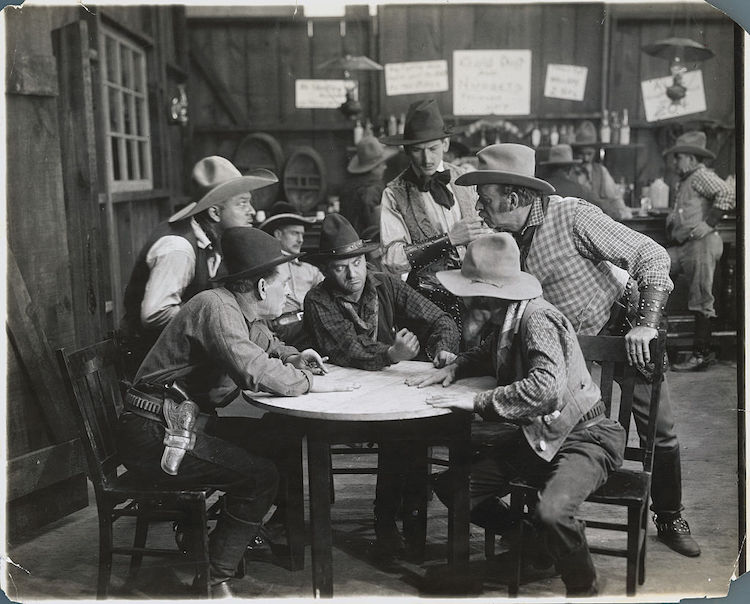 With our archives now 3,500+ articles deep, we’ve decided to republish a classic piece each Friday to help our newer readers discover some of the best, evergreen gems from the past. This article was originally published in March 2010.

While writing our first book, The Art of Manliness: Classic Skills and Manners for the Modern Man, we decided to throw a few old-time 19th century slang words into the text just for fun. While scouring old dictionaries for some virile words and phrases that would fit into the book, we came across many others that were beyond awesome but didn’t make the cut. Here’s a glossary of some of our favorites (with their original definitions) that were tossed about on the streets and saloons back in the day. These colorful expressions probably won’t ever come back into popular parlance, but they’re a real hoot to read through.

The Art of Manliness Dictionary of Manly 19th Century Vernacular

Admiral of the Red: A person whose very red face evinces a fondness for strong potations.

All-overish: Neither sick nor well; the premonitory symptoms of illness. Also the feeling which comes over a man at a critical moment, say just when he is about to “pop the question.” Sometimes this is called, “feeling all-over alike, and touching nowhere.”

Anointing: A good beating. A case for the application of salve.

Barking-Iron, or Barker: A pistol. Term used by footpads and thieves generally.

Bellows: The lungs. Bellowser, a blow in the “wind,” or pit of the stomach, taking one’s breath away.

Bellows to Mend: A person out of breath; especially a pugilist is said to be “bellows to mend” when winded.

Blind Monkeys: An imaginary collection at the Zoological Gardens, which are supposed to receive care and attention from persons fitted by nature for such office and for little else. An idle and useless person is often told that he is only fit to lead the blind monkeys to evacuate.

Blinker: A blackened eye. Also a hard blow in the eye.

Bully Trap: A brave man with a mild or effeminate appearance, by whom the bullies are frequently taken in.

Bunch Of Fives: The fist. Pugilistic.

Colt’s Tooth: Elderly persons of juvenile tastes are said to have a colt’s tooth, i.e., a desire to shed their teeth once more, to live life over again.

Crab: To prevent the perfection or execution of any intended matter of business, by saying anything offensive or unpleasant, is called crabbing it, or throwing a crab.

Cupboard Love: Pretended love to the cook, or any other person, for the sake of a meal.

Cut: To renounce acquaintance with anyone is to cut him. There are several species of the “cut,” such as the cut direct, the cut indirect, the cut sublime, the cut infernal, etc. The cut direct is to start across the street, at the approach of the obnoxious person, in order to avoid him. The cut indirect is to look another way, and pass without appearing to observe him. The cut sublime is to admire the top of King’s College Chapel, or the beauty of the passing clouds, ’til he is cut of sight. The cut infernal is to analyze the arrangement of your shoe-strings, for the same purpose.

Draw the Long Bow: To tell extravagant stories, to exaggerate overmuch; same as “throw the hatchet.” From the extremely wonderful stories which used to be told of the Norman archers, and more subsequently of Indians’ skill with the tomahawk.

Fart Catcher: A valet or footman, from his walking behind his master or mistress.

Firing a Gun: Introducing a story by head and shoulders. A man, wanting to tell a particular story, said to the company, “Hark, did you not hear a gun? But now we are talking of a gun, I will tell you the story of one.”

Flag of Distress: Any overt sign of poverty; the end of a person’s shirt when it protrudes through his trousers.

Floorer: A blow sufficiently strong to knock a man down, or bring him to the floor. Often used in reference to sudden and unpleasant news.

Flying Mess: To be “in flying mess” is a soldier’s phrase for being hungry and having to mess where he can.

Gentleman of Four Outs: When a vulgar, blustering fellow asserts that he is a gentleman, the retort generally is, “Yes, a gentleman of four outs,” that is, without wit, without money, without credit, and without manners.

Go By the Ground: A short person, man or woman.

Gullyfluff: The waste — coagulated dust, crumbs, and hair — which accumulates imperceptibly in the pockets of schoolboys.

Half-mourning: To have a black eye from a blow. As distinguished from “whole-mourning,” two black eyes.

Heavy Wet: Malt liquor — because the more a man drinks of it, the heavier and more stupid he becomes.

Hobbadehoy: A youth who has ceased to regard himself as a boy, and is not yet regarded as a man.

Hogmagundy: The process by which the population is increased.

Holy Water: “He loves him as the Devil likes holy water”; i.e. hates him mortally.

Honor Bright: An asseveration which means literally, “by my honor, which is bright and unsullied.” It is often still further curtailed to “honor!” only.

How’s Your Poor Feet: An idiotic street cry with no meaning, much in vogue a few years back.

Hugger-mugger: Underhand, sneaking. Also, “in a state of hugger-mugger” means to be muddled.

Job’s Turkey: “As poor as Job’s turkey” — as thin and as badly fed as that ill-conditioned and imaginary bird.

Keep a Pig: An Oxford University phrase, which means to have a lodger. A man whose rooms contain two bedchambers has sometimes, when his college is full, to allow the use of one of them to a freshman, who is called under these circumstances a pig. The original occupier is then said to “keep a pig.”

Ladder: “Can’t see a hole in a ladder,” said of anyone who is intoxicated. It was once said that a man was never properly drunk until he could not lie down without holding, could not see a hole through a ladder, or went to the pump to light his pipe.

Lay Down the Knife and Fork: To die. Compare “pegging-out,” “hopping the twig,” and similar flippancies.

Monkey With a Long Tail: A mortgage.

Month of Sundays: An indefinite period, a long time.

Nose-ender: A straight blow delivered full on the nasal promontory.

Nose in the Manger: To put one’s nose in the manger, to sit down to eat. To “put on the nose-bag” is to eat hurriedly, or to eat while continuing at work.

O’clock: “Like one o’clock” — a favorite comparison with the lower orders, implying briskness; otherwise “like winkin’.” “To know what’s o’clock” is to be wide-awake, sharp, and experienced.

Off One’s Chump: To be crazy is to be off one’s chump; this is varied by the word “chumpy.” A mild kind of lunatic is also said to be “off his head,” which means of course exactly the same as the first phrase.

Off the Horn: A term used in reference to very hard steak.

Out of Print: Slang made use of by booksellers. In speaking of any person that is dead, they observe, “he is out of print.”

Perpendicular: A lunch taken standing-up at a tavern bar. It is usual to call it lunch, often as the perpendicular may take the place of dinner.

Pocket: To put up with. A man who does not resent an affront is said to pocket it.

Pot-hunter: A man who gives his time up to rowing or punting, or any sort of match in order to win the “pewters” which are given as prizes. The term is now much used in aquatic and athletic circles, and is applied, in a derogatory sense, to men of good quality who enter themselves in small races they are almost sure to win, and thus deprive the juniors of small trophies which should be above the attention of champions, though valuable to beginners. Also an unwelcome guest, who manages to be just in time for dinner.

Saw Your Timber: “Be off!” equivalent to “cut your stick.” Occasionally varied, with mock refinement, to “amputate your mahogany.”

Scandal-water: Tea; from old maids’ tea parties being generally a focus for scandal.

Shake the Elbow: A roundabout expression for dice-playing. To “crook the elbow” is an Americanism for “to drink.”

Smeller: The nose; “a blow on the smeller” is often to be found in pugilistic records.

Sneeze-lurker: A thief who throws snuff in a person’s face, and then robs him.

Snotter, or Wipe-hauler: A pickpocket whose chief fancy is for gentlemen’s pocket handkerchiefs.

Sober-water: A jocular allusion to the uses of soda water.

Tail Down: To get the tail down generally means to lose courage. When a professional at any game loses heart in a match he is said to get his tail down. “His tail was quite down, and it was all over.” The origin is obvious.

Tune the Old Cow Died Of: An epithet for any ill-played or discordant piece of music.

Slang and Its Analogues Past and Present, 1891