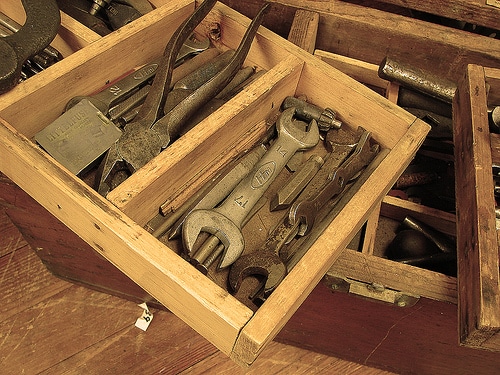 Your girlfriend needs help putting some furniture together. Your wife asks you to install a ceiling fan. Your kid needs her bike fixed. Of course you have the tools to take on these jobs, right? For many younger men these days, owning a well equipped toolbox is something that only their dads do. Often when these men have a project, they have to go to someone else to take care of their handyman needs. But a man should be self-reliant. He should have the tools and know-how to tackle basic projects around the house.

If you’re one of those younger gents who just never got around to stocking a toolbox, below we’ve included a list 12 basic tools that we think every toolbox should have.

A few things to remember before you head over to the hardware store and go on a shopping spree:

Fork over the money for quality tools. You can easily go to Wal-Mart and buy an entire 102 piece, Made in China, piece of crap tool set for $30. Fight the temptation. These chintzy tools will probably last you a few uses before they snap or break on you. Invest your money in quality, durable tools that will last a lifetime. If you have no clue about which brand to go for, Craftsman tools are a pretty safe bet. They’re durable and tough, and their hand tools come with a lifetime warranty.

One at a time. Rome wasn’t built in a day, and neither are great tool boxes. You don’t need to buy your complete set of tools all at once (unless of course you have the scratch to do so). Spread your acquisitions out so you don’t break the bank. Another good way to build your toolbox arsenal is to ask for specific tools for presents on different occasions. If you’re a young man just graduating high school, ask for some tools instead of money. That’s when I started my tool collection. I also know of a couple of (lucky) guys whose friends threw them a “Man Shower” before they got hitched. All of their buddies brought a tool or piece of camping gear to bestow upon the groom-to-be. Also, Christmas, your birthday, and Father’s Day are all great times to acquire tools. 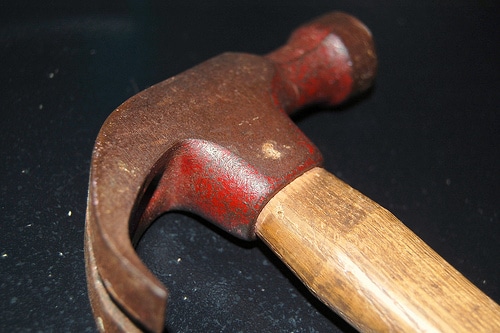 A good, solid hammer can be used for driving nails into wood as well as small demolition jobs. My old man would use his hammer for damn near everything, much to the chagrin of my mother. Go for the classic 16 ounce hammer. It’s heavy enough for most basic home repair needs, but light enough for you to carry around without it being a nuisance. While your grandpa probably used a hammer with a wooden handle, you shouldn’t. Wood handles break easily. Go with something that has a long-lasting synthetic handle. Also, when picking out a hammer, you want one that has a good balance in your hand and isn’t head heavy. It’s a lot like picking out a golf club or a baseball bat. So go to the hardware store and try a few out before making your selection. 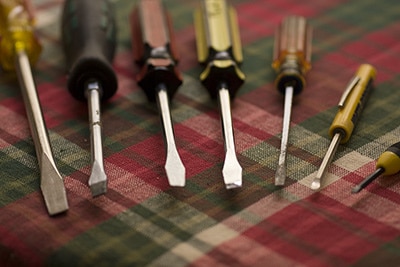 A flathead screwdriver has a single blade that fits into the single slot of a flathead screw. Flathead screws have been around for a l o n g time, so it’s likely your great-great grandpa had a few flathead screwdrivers in his tool chest. While the Phillips screw has quickly taken the place of flathead screws in most projects, it’s still a good idea to have a few flathead drivers in your tool arsenal. In addition to driving in screws, flatheads can also be improvised for different uses like light prying, scrapping, and nudging. Quick tip: make sure the electricity is turned off BEFORE you start sticking a screwdriver in a light socket to pry out a broken bulb. Trust me. 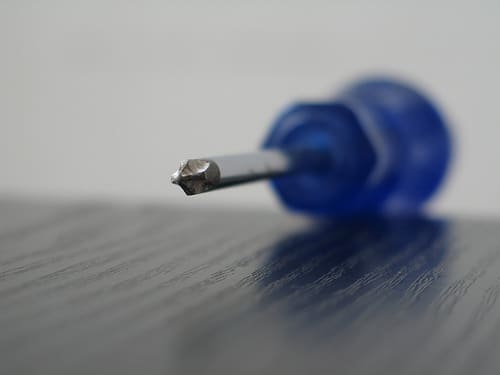 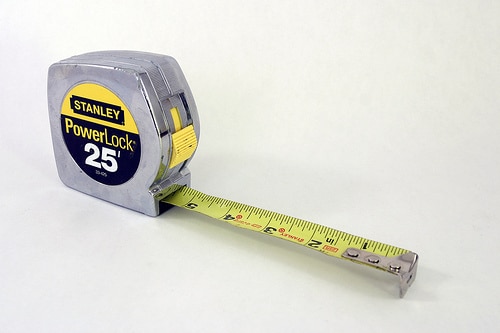 Whether you’re building a gun cabinet or measuring to see if that flat screen TV will fit in your den, a dependable 25′ retractable metal measuring tape is a must. Plus, they’re fun for your kids. I remember my brother and I would take my dad’s measuring tape and extend the tape all the way out, lock it, and then watch it retract. It was double fun when the end would accidently pinch my brother’s finger, and he would start crying. 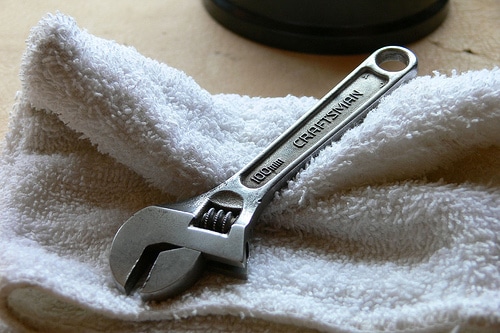 Of all your tools, this baby will probably see the most action. It’s like having 50 wrenches in one. The crescent wrench is an adjustable wrench with a sliding jaw that changes the width of the wrench. So you can use the same tool on different size nuts and bolts. Remember, when you’re using a crescent wrench, the movable jaw is located on the side towards which the rotation is to be performed. This reduces the chance of backlash.

Socket Wrench (aka the ratchet) 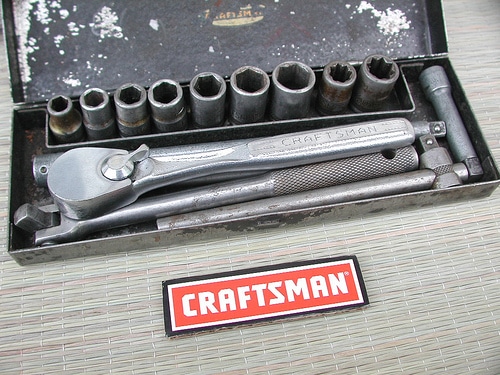 When you have a large project that requires you to tighten and loosen a bunch of nuts and bolts, it’s time to put aside the crescent wrench and reach for its more efficient brother. The socket wrench’s ratcheting mechanism allows you to tighten a nut without having to remove and refit the wrench after each and every turn. This can make your life a whole lot easier when you’re taking on larger projects. A 3/8-inch socket wrench with a couple of extenders and a set of sockets should do the trick. 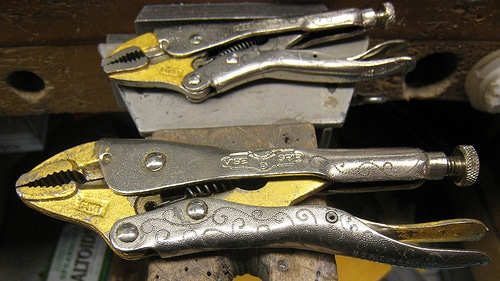 Vise grip pliers come in handy when you need an extra hand but only have your own two mitts to work with. Vise grip pliers are pliers that can lock in place. Some locking pliers use a mechanism that allows one- handed release of the locking mechanism; others require two hands to disengage. They are versatile tools that can be used as pliers, a pipe wrench, an adjustable wrench, wire cutters, a ratchet, or a clamp. Standard 5-10WR pliers are good for most stuff around the house and garage. 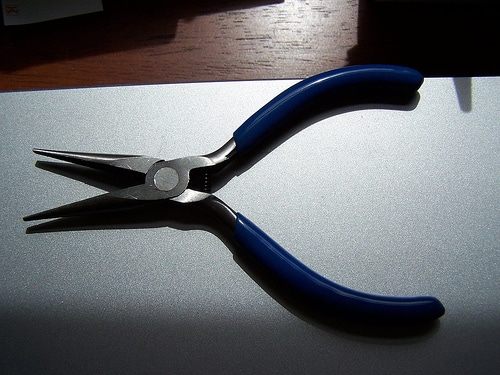 An essential electrician’s tool, needle nose pliers are good for any household project which requires you to cut, bend, grip, or strip wire. Because of their long and skinny shape, they’re particularly useful for getting into small cavities. You can also use them to pinch your younger brother with. 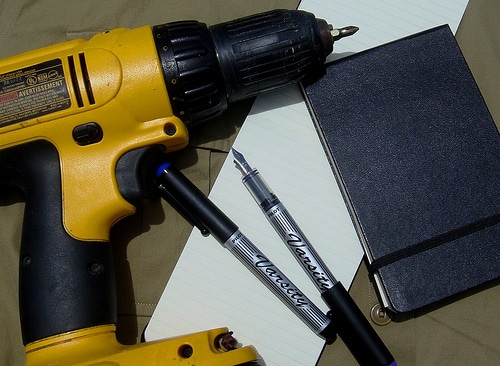 A good cordless drill is an essential tool to have in your toolbox. It can be used for drilling holes into sheetrock or driving screws into a 2×4. When choosing a cordless drill, you want one with lots of power, which is measured by the amount of voltage in its battery. You can get drills that have batteries that go up to 18v. But when you increase voltage, you increase weight. That 18 volt bad boy weighs 10 pounds. 12 volts is a good size. It’s enough power to do most stuff around the house but isn’t too heavy. Also, make sure the drill you get has multiple speeds and is reversible. The reversible feature will come in handy if you need to take some screws out when your treehouse goes awry. 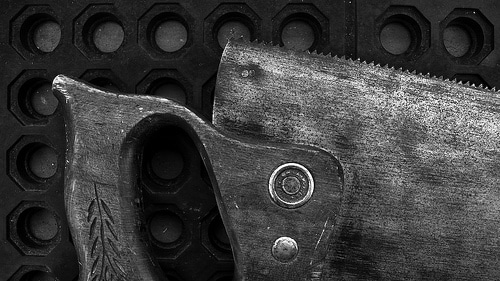 The image of a fine handsaw has long been the emblem of a craftsman at work. A good general purpose handsaw is useful for trimming branches off your tree or cutting lumber for a project around the house. Crosscut saws are used to cut against the grain on a piece of wood. That’s exactly what you do when you trim a branch or shorten a 2×4. If you think you’ll be doing work that requires you to cut along the wood’s grain, get a rip saw as well. 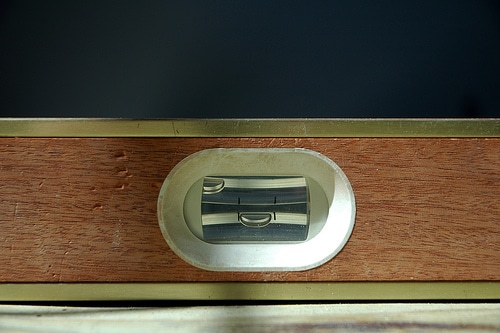 Whether you’re hanging up pictures or putting a mantle over your fireplace, a straight line is absolutely crucial. You don’t want to put a bunch of nails in the wall, only to step back and see that’s it’s crooked. To get the job done right the first time, you need to use a level. There are some sophisticated laser levels available these days, but you can’t beat the satisfaction of finally nudging that bubble into place. Of course if you have the iphone level app, you’re all set. 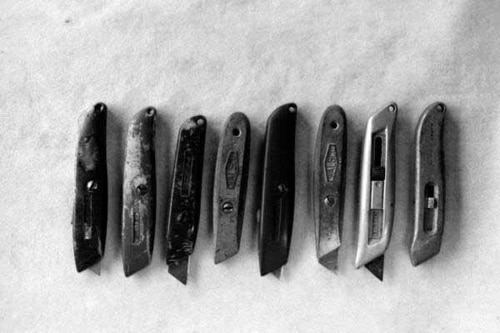 While it may not be the most exciting of the tools, your utility knife will never be found gathering dust at the bottom of your toolbox. Every project always provides plenty of things to cut and scrape, hundreds of tasks that cry out for the utility knife’s super sharp blade.